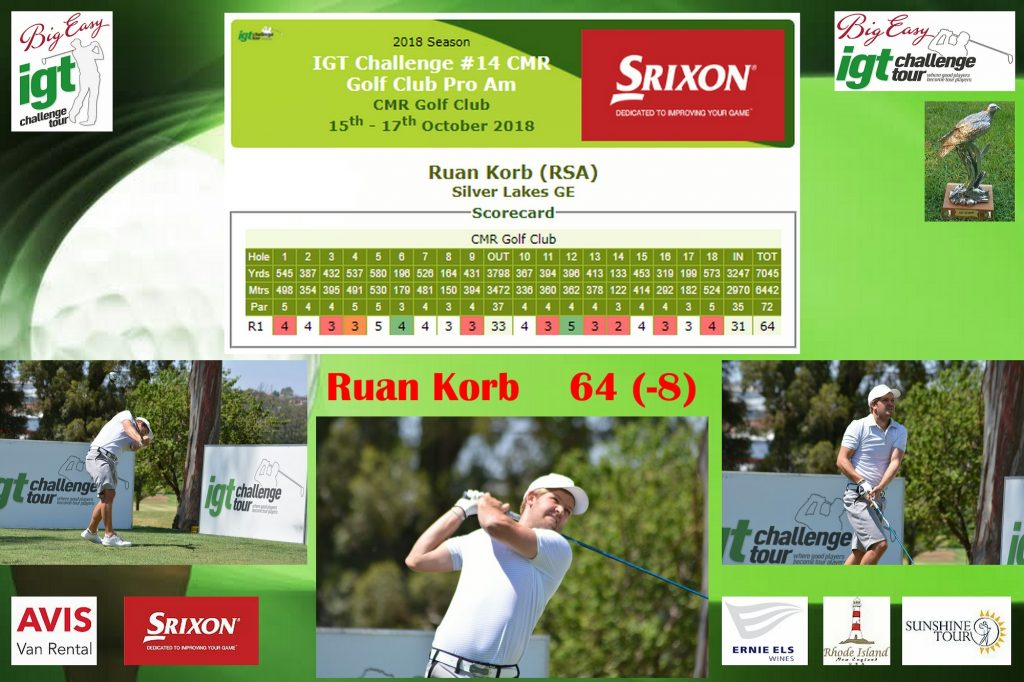 MARAISBURG, 15 October 2018 – Ruan Korb didn’t know how his borrowed clubs would behave but he was more than pleased to fire an eight-under-par 64 for the first round lead in the IGT #14 CMR Golf Club Pro-Am at CMR Golf Club on Monday.

“Two weeks ago, my house in Lynwood was broken into and the thieves made off with my golf clubs, a flat screen television and four laptops,” said the 24-year-old Korb. “To top it all, they managed to squeeze all of that and more into my Toyota Etios and drove off with the lot.

“I am still sorting out insurance and stuff, so I borrowed some clubs from Srixon and I’ve couldn’t be happier with how well I’m hitting the ball.”

Korb opened up a one-shot lead over Luke Brown and he leads by two shots from Jason Roets.

Like Korb, Brown and Roets both had victories on the country’s premier golf development circuit last year but haven’t been able to pull off a winning performance this season.

“I’ve had a bunch of close calls this season, but the final round always bites me,” said Korb.

“I’ve been working with Maretha Claassen (sport psychologist) on technics to keep my focus and to stay positive over three rounds for the last couple of weeks, so I’m really pleased that I’ve put myself in contention again.”

Korb got off to a birdie start and followed a birdie at three with an eagle at the par five fourth. He dropped a shot at six, but birdied nine to turn four-under. Further gains at 11, 13 and 14 offset a bogey 12 and he reeled in two more at 16 and 18 to finish the loop in 31 strokes.

“I hit driver down the first,” said the Silver Lakes golfer. “The course was still pretty wet after the recent storms and the ball sat down where it pitched. I hit a 6-iron over the green, but chipped it to two foot and boxed the putt for a birdie start.

“I hit driver down the third fairway, and a lob-wedge from 90 meters to the back of the green. The ball spun back to a foot and I tapped in for birdie. I hit a great drive at the par five and I hit an easy pitching wedge to the front of the green. I had the perfect line, so I decided to putt and rolled it in for eagle.

“I’m not too confident with the distances yet with the borrowed clubs, and I took 7-iron at the sixth and overshot the green and three-putted after I hit the first putt too hard. My drive at nine was just off the fairway. I hit a pitching wedge from 130 metres it to 20 foot and drained the putt. Holing that putt really gave me some confidence to take to the back nine.”

Korb pitched his second at 11 over the flag and holed a swinging putt from 15 foot for birdie. He pulled his drive at 12 and had to punch out. His third went through the green and his missed the par putt.

“I birdied 13 from a foot and I nearly holed out at 14, but knocked in the putt for birdie,” said Korb. “I hit a great chip to two foot at 16 and holed that for birdie. I hit a great drive at 18 and I was between clubs again with the distance to the green. I had 210 metres, so I went with a 4-iron. I hit it left over the bunker and hit another great chip to two foot, and holed the birdie putt.

“I was very confident with my driver and 3-wood. I had a fitting on Saturday on the trackman with Arthur Horne at Copperleaf and I used the driver a lot because I’m hitting it dead straight.

“I’m definitely feeling good about everything right now. My game is definitely in a good place right now. I don’t know what I can achieve this week, but I played the course blind and had a surprisingly great round. Hopefully I can keep it together over the next two rounds.”