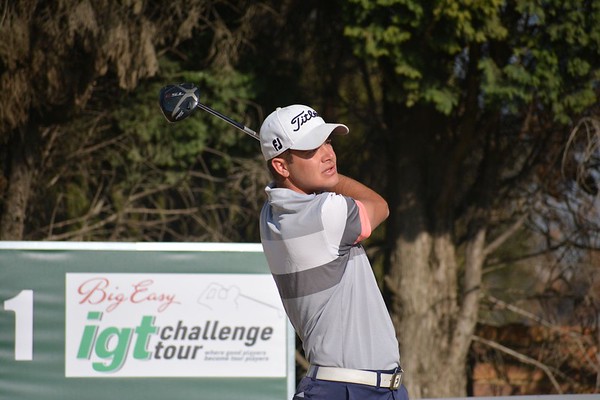 66 for Loubser for a slender lead at State Mines

BRAKPAN, August 24 – Golf’s return continues this week and the IGT Tour’s Chase to #2 State Mines got off to a flying start, with Herman Loubser carding a near-perfect six-under-par 66 to take the first round’s lead at State Mines Country Club on Monday.

Unlike his shaky start last week at Modderfontein where he opened with a two-over 74, the Theewaterskloof Golf Club player looked a different player in Brakpan. A birdie and an eagle on the front, plus a lonesome bogey, defined his start on Monday, gaining confidence with each shot.

“Last week, I didn’t hit the ball well from the tee box and that cost me,” Loubser reflected after his round, “so today, I was a lot more solid and I put myself in better scoring positions.”

An untainted 32 on the back nine – characterised by birdies on the 10th, 11th, 14th and 17th holes – ensured Loubser goes home with a single-shot lead over number one amateur in the country, Casey Jarvis and his fellow Golf RSA squad member, Werner Deyzel, along with Vaughn Van Deventer who all carded 67s.

“It feels awesome,” Loubser said of his start to round one. “I’ve been working hard on my game in the time off, so it’s nice to see it paying off. There’s still a lot of golf to be played but I haven’t shot a 66 in a long time, so I reckon I’m off to a great start.

“I’m pleased with my driving because I’ve been struggling a lot lately, from tee to green. To see those tee shots going down the middle of the fairway today really boosted my confidence.”

Jarvis was as solid as ever, signing for a blemish-free 67 at his home course. The Sunshine Ladies Tour’s Cassandra Hall also played some solid golf and her four-under-par 68 round, which sees her in a share of fifth with Therion Nel, has her trailing by just two.