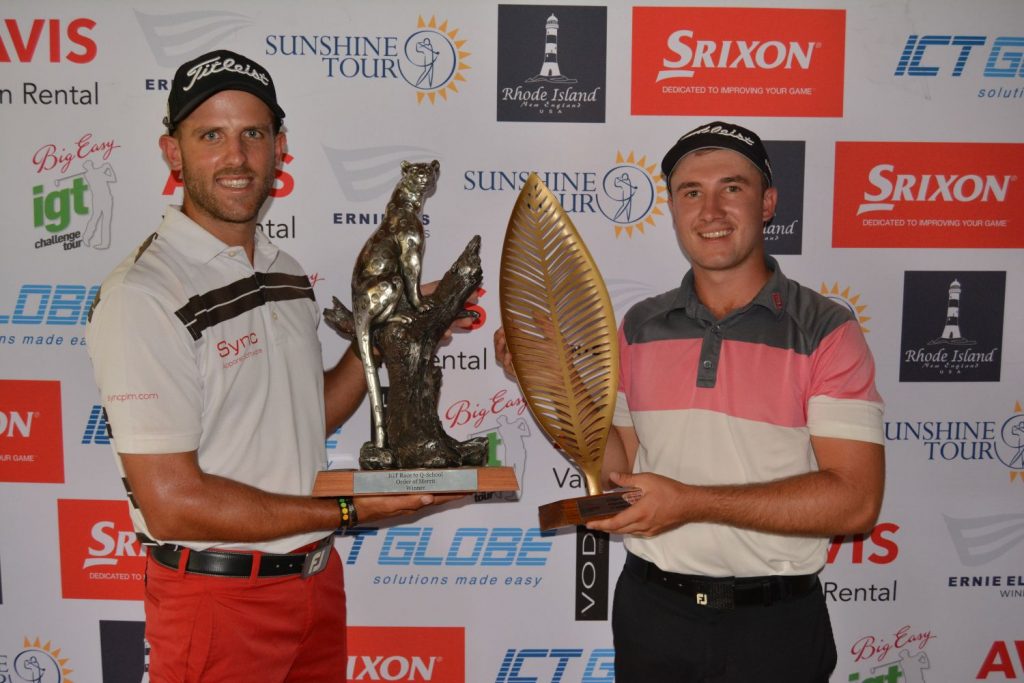 Coetzee carded a flawless seven-under 65 to finish on 12-under. Playing in the final group, Strydom bogeyed his final hole for a one-under 71, finishing on the same score as Coetzee.

The pair marched down 17 and 18 again, both making pars each time to send the sudden death clash to a third hole. It was on the third playoff hole that Coetzee struck the killer blow with a log wedge from 65 metres on the par four 17th to inside 10-feet. Strydom missed his lengthy birdie attempt, and Coetzee did not need a second invitation as he rifled home the putt for the win.

In Coetzee’s mind, he had already thrown away the tournament in regulation play – and that helped him make best use of the second bite of the cherry in the playoff.

“I had a six foot putt on 18 to get to 13-under which I thought was going to get into a playoff, but then I found out that Tristen had made bogey,” said the 20-year-old Kloof Country Club member. “I know 18 is a pretty simple hole and I thought that putt on 18 probably cost me the tournament.”

Neal Woernhard from Switzerland was third on 11-under, with Quintin Wilsnach alone on nine-under in fourth. Sharing fifth place were Ruan Korb and Coert Groenewald.

It was a second win this season for Coetzee after he won the Race to Q-School #1 at Centurion Country Club last month.

His stellar play has meant he finished inside the top-15 on the IGT Race to Q-School Top 15 Ranking and that’s straight passage to the final stage of the Sunshine Tour’s 2020/2021 Qualifying School.

“When I win I do get a lot of confidence going forward for the coming tournaments. My next tournament is Q-School next month where I’m now into the final stage at Houghton Golf Club, so I’ve just got so much more confidence heading into that now.”

“This win means me and my coach Shaun Coetzee are working on the right things. The mental side of the game has been good. I’ve just got a lot of confidence, it’s really a good feeling.”

It seems having Shaun Coetzee as a mentor is indeed a good omen, as IGT Race to Q-school Order of Merit winner Clayton Mansfield is also coached by him. In fact, Byron Coetzee and Mansfield who are good mates were paired together in the final round – meaning the winners of the tournament and the Order of Merit came from the same group.

“Playing with my friend who I practice with – Clayton- made it very relaxed and easy to play today.”

Mansfield, meanwhile, was still trying to let it sink in that he was the dominant player on the IGT Race to Q-school Order of Merit.

“It feels unreal. It’s nice to see that the hard work is paying off with the two wins is amazing. I’d like to dedicate this to my coach [Shaun Coetzee] – he’s going through a bit of a rough time at the moment,” said Mansfield. “This one is for him. This is a nice way to somewhat pay him back. This is what we want to achieve as golfers.”

Winning the Order of Merit was a credit to the consistency of the 25-year-old Mansfield who tasted victory twice during the season.

“I definitely see myself as a season golfer now. I like to try and be consistent over a full season, not just one event. I take it tournament by tournament, but if you’re consistent – one or two bad events it’s not the end of the world.”

Making that top-16 could make all the difference according to Mansfield.

“It makes a world of difference. To play two stages is quite daunting. If you can miss one, it just helps so much. It just means you can concentrate and prepare for one tournament instead of two. They’re just gruelling. You want to get onto the Sunshine Tour, that’s just the ultimate.”

Royal Johannesburg and Kensington’s Keaton Slatter finished at the summit of the IGT Race to Q-School Top 15 Ranking with topped the with R7 082, followed by Jack Duthie from Southern Cape.

Written and released by Michael Sherman and Lali Stander on behalf of the Big Easy IGT Challenge Tour.