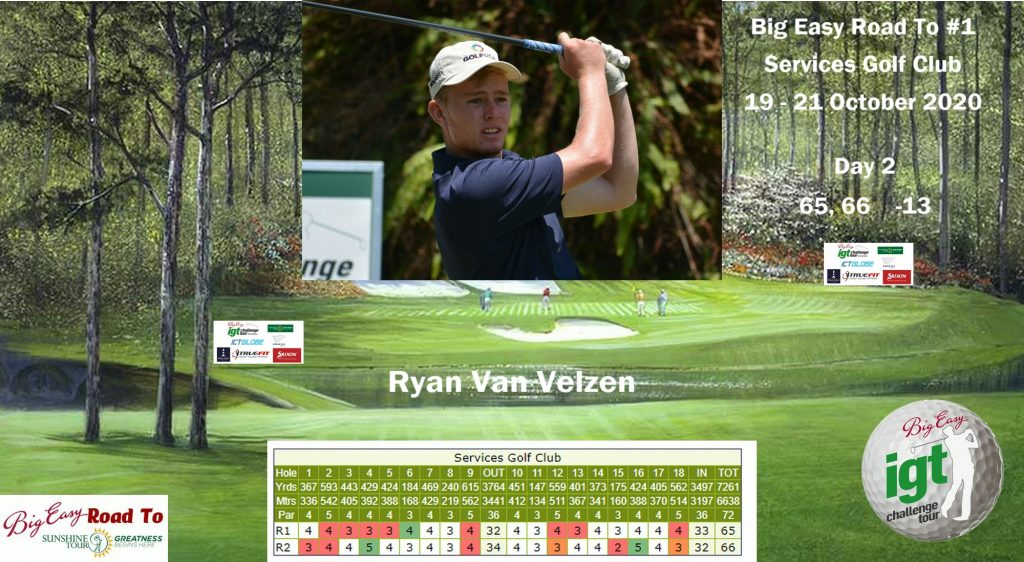 ZWARTKOP, October 20 – Golf RSA squad member Ryan Van Velzen carded a second-round six-under 66 in the Big Easy Road to #1 Services Golf Club, to back up his opening round of 65 and catapult himself to the summit at 13-under-par with a one-shot lead on Tuesday.

“I am really happy the way I’ve played the last couple of days,” said Van Velzen, “I’ve been hitting the ball really well and I’ve been making most of my short putts which I’m really pleased about. To be honest with you, I’m just trying to make as many birdies and eagles as I can. I’ve been hitting tons of drivers where others are probably hitting irons off tees which is a huge advantage leaving me pitches in.”

Van Velzen entering the second round of this first tournament of the new Big Easy Tour season trailing by a single shot. Birdies on his first two holes of the round settled him down and even after the bogey he made on the fourth, he was still able to steady his round and make another birdie on nine to turn in 34.

“The course is really starting to green up and is scorable,” he noted. “The greens are a bit on the slow side but are pretty true making it perfect for aggressive putting.”

“I’m just going to go out there tomorrow and just try to have fun and make as many birdies and eagles as I can and that’s all you can do,” he said, “but the thing I’m looking forward to the most tomorrow, is stepping into the ring and battling it out until the final round.”

The final round is going to be a battle without a doubt. Lurking just a shot off Van Velzen’s lead at 13-under-par, Vaughn Van Deventer isn’t letting up and will feel he has an opportunity to add the Big Easy Tour title to his cabinet.

A further two shots back lie the quartet of Karabo Mokoena, Therion Nel, Kyle McClatchie and overnight leader, Dylan Kok, who are all at 10-under-par for the tournament.