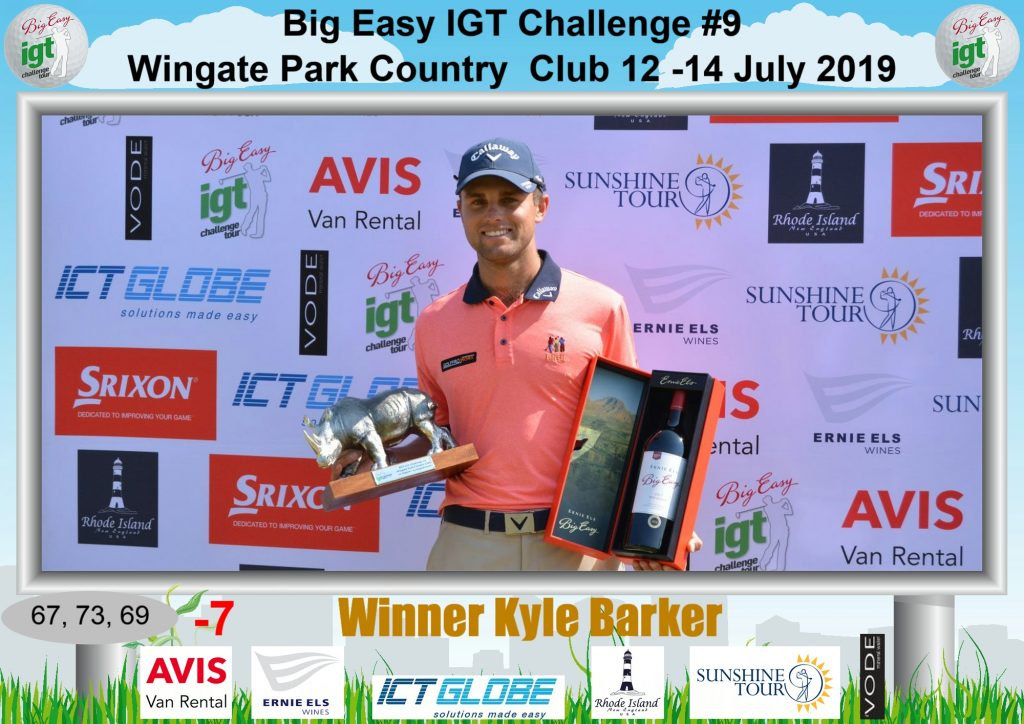 Back to back Big Easy IGT’s for Barker

Back to back Big Easy IGT’s for Barker

JOHANNESBURG, 14 August 2019 – Kyle Barker went two-for-two on the Big Easy IGT Challenge Tour when he claimed his second victory in just his second start on Wednesday.

The Sunshine Tour rookie broke free from the four-way tie for the lead at the final hole with a birdie finish to deny Ruan de Smidt, Clinton Grobler and Gary Player School member Jacquin Hess a turn in the winner’s circle in the ninth event at Wingate Park Country Club.

The Randpark golfer, whose maiden win on the golf development series came at Killarney Country Club exactly one month ago, signed for a final round three-under-par 69 to win by one shot on seven-under.

Barker is the first back-to-back winner this season, and the second two-time winner after Matthew Spacey who won first and fourth tournaments.

“I won on the Mena Tour and three times on the IGT Challenge Tour, so I ticked a big box on my bucket list with the first win on the Big Easy IGT. I only played this week so I could keep the game in shape for the Vodacom Origins in Sishen at the end of August.

“To come away with a win is a huge bonus, especially given the strong field this week and the bunched up leaderboard in the final round. I made it hard on myself over the last couple of holes, but then, none of my previous wins was exactly pretty.”

Barker began the final round four shots off the pace.

Overnight leader Theunis Bezuidenhout dropped out of contention with a quadruple bogey start, and Barker, four off the pace at the start of the final round, moved towards the leaders with a birdie at the par five second.

While Spacey and Clinton Grobler had stabs at leading the field, Barker stayed in touch with nine straight pars but he joined the two leaders in front with a birdie at the par-four 12th and took the outright lead with an eagle at the par five 15th.

“That was a great eagle,” Barker said.

“The tee was right back, leaving us with a huge dog-log right. I drove my tee-shot right and I had to hook an 8-iron high from 180 metres to out of the trees. It pitched it perfectly, rolled down the slope and stopped three feet from the hole.

“Then I gave the two shots right back. My gap-wedge finished left of the bunker and I gummed it over the green and couldn’t up-and-down for bogey. I just shrugged it off, because I was still tied for the lead with Ruan and Clinton with two holes to play.”
Hess, meanwhile, clocked in with a round of 69 to set the clubhouse target on six-under.

Barker, De Smidt and Grobler all made pars at the 17th but his opponents failed to take advantage at the par five closing hole to force a play-off.

“I hit my tee shot down the right, and a soft 8-iron from 180 metres into the green,” Barker said. “I lagged my first putt, about 40 feet, close and tapped in for birdie. A year ago, it could have gone really wrong after the double at 16, but I’ve learned to control my emotions and to get past the bad shots.

“I’m a firm believer that things don’t happen to you; it happens for you and it’s up to you how you use the opportunities, good or bad. I’m just so pleased with how I held it together over the last two holes to pull it off. This builds some confidence.”