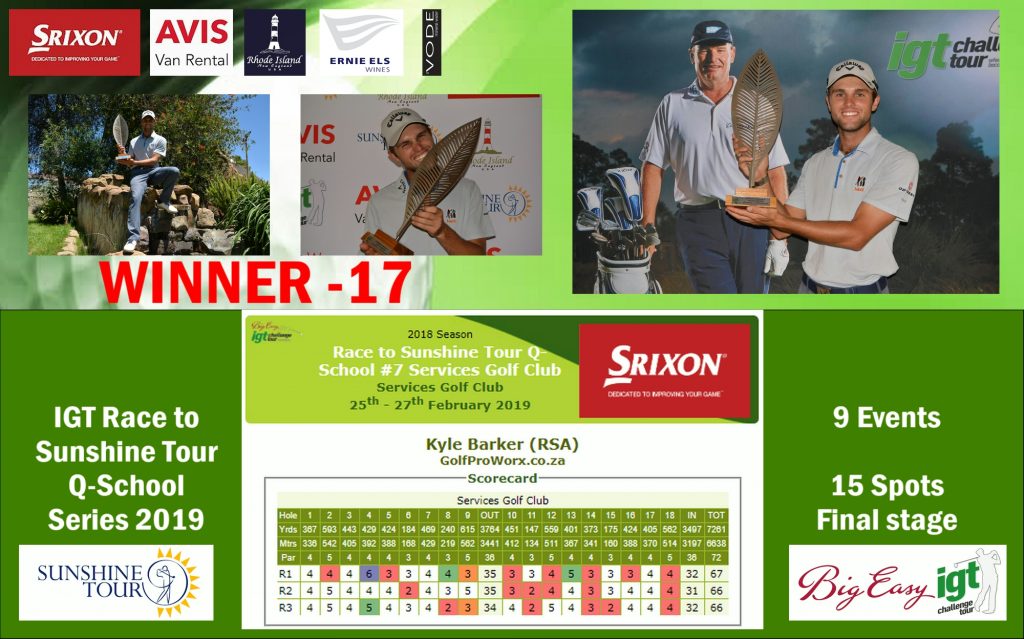 Barker, who turned 21 earlier this month, birdied the first extra hole after both players had finished on 17 under par.

While the Randpark golfer celebrated adding to his silverware haul, there was disappointment for Big Easy IGT Tour Championship winner, who fired a stunning final round nine-under-par 63 at Services Golf Club.

Barker entered the final day on 11-under and tied for the lead with Englishman James Mack.

“I was one-over through four holes, having missed a birdie chance at the par five and I dropped four, so I wasn’t very happy,” said Barker. “I was four behind because James started birdie-eagle. Luke started three off the pace but got within one of James with a birdie-birdie start. I just wasn’t enjoying myself.”

A chat with his caddie and a birdie-eagle combination to take the lead around the turn soon changed Barker’s attitude.

“I was walking down the seventh fairway and I asked my caddie if I always struggled in the final rounds because I tried too hard,” Barker said. “He told me to start playing as if it was a practice round. It was a small thing, but it made a big impact to how I approached the rest of my round.

“I chipped in for birdie at the eighth and made a great eagle at nine, which put me in the lead with nine holes to play.Going down the back nine, everything felt free like it was supposed to feel.”

Brown, meanwhile, birdied six, nine and 10 to join Barker at 13 under.

Barker pitched it to three foot at the par three 11th and made the birdie putt to inch ahead, but Brown responded with one of his own at the par five 12th. Both players birdied the par-four 14th, but Barker edged clear once again when Brown made par at the short 15th.

“The 14th is a driveable par four, but I opted to lay up,” he said. “I hit a 90 metre wedge-shot to 10 foot and made the putt. At 15, I hit a great wedge to five foot and boxed the putt again. That took me to 16 under, but Luke was playing up ahead and news came back that he went birdie-birdie up at the last two holes to finish 17 under.

“The pressure was on over the last two holes. I needed to two birdies to win or at least one to force a play-off. I hit it to 20 foot at 16 and 17, but I missed both birdie chances. That left me with an eagle on 18 to win or a birdie for a play-off.

“I hit a great tee shot across the trees in the fairway and I had 200 flag. I hit 6-iron to 30 foot and faced a downhill slider. My playing partners – James and Tristen (Strydom) – were closer to the hole, and elected to putt first to give me a bit of help. I’m so grateful to them. I got a good line and I ended up lagging the putt to three foot and made the birdie.

“Going into the play-off felt a bit like playing IPT for Central Gauteng. Luke and I have played plenty IGT events together. Neither of us excelled at junior or on open amateur level. We basically both came from the bottom. Now we’re at the top and we’re winning tournaments and it’s a great feeling. We’re good mates, too, so playing for the win was stress-free and fun.”

The pair replayed the par five closing hole, where Barker sealed victory with a tap-in birdie putt after he lagged a 15-foot eagle putt to give.

“I have to make special mention of my coach Neil Cheetham,” Barker said. “We’ve been together for five years now and it just keeps going better. I also started seeing Alan Rimmel from Conscious Sport and I want to thank him for giving me some tools to stay in the moment. Big thanks to Callaway, who keep me in equipment and Birdie Clothing and Sketchers for making sure I arrive fresh as a daisy at every event.

“Last but not least, a special thanks to my parents Roddy and Andrea, my sister Carah and my girl-friend Savannah Wesley for always being in my corner.”

All competitors RSA unless otherwise specified; amateurs indicated as AMA.