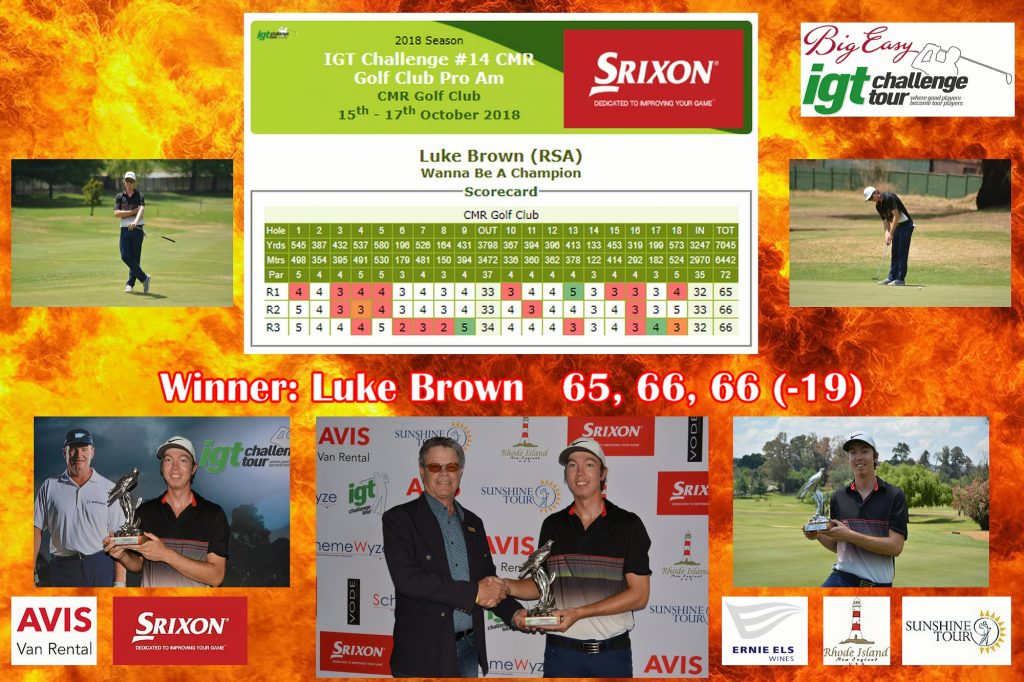 The 20-year-old prodigy was composure and confidence personified as he held his nerve and boxed a 12-foot putt for eagle to end an enthralling three-man final round battle at CMR Golf Club.

Brown closed with a six-under-par 66 to beat Jason Rossiter by two strokes on 19-under 197. Joint overnight leader Ruan Korb finished a further stroke back.

“It was a tight fight from start to finish,” said Brown. “The three of us were still neck-in-neck after 17 holes and it could have gone either way. When I won my first IGT Challenge Tour title last year, I was still an amateur and it feels unbelievably good to get this first pro win under the belt.”

Brown and Korb headed into the final round tied on 13-under with Rossiter just one off the pace.

Over the first 17 holes, there was little to separate the trio. Korb edged into the early lead with a birdie start and moved to 16-under with back-to-back birdies at four and five. Brown birdied four and Rossiter had an eagle at the par five to stay in touch at 14-under.

Then Brown broke free of his playing partners with three birdies on the bounce from six.

“I hit a 6-iron into the first short hole and drained a 30-footer to start the birdie run,” said the Wanna Be A Champion Academy player. “I hit it close at seven from 130 metres out and boxed the putt and I hit it to two foot at the second short hole (eight).

Korb dropped to 15-under with a bogey at seven and Rossiter birdied nine to join Korb.

The last three holes decided the outcome of the tournament after Korb made it a three-way tie on 17-under with a birdie at 16.

“I birdied 16 to pull clear, but dropped at 17 with another three-putt bogey,” Brown explained. “I thought for sure we’d have a play-off. Then Ruan bogeyed 17 and made par at the last for a 69. The last hole has a tough tee shot, with trees on both sides and water trouble. I hit a pretty good tee shot and only had 170 metres left for my second. I hit a soft 7-iron into to the wind to 12 foot and holed the putt. It was especially sweet making that putt after the three-putt bogeys.”

Rossiter also had an eagle chance, but the Krugersdorp rookie three-putted for par had to settle for second after a final round 67.

Brown’s victory lifted him to ninth on the IGT Challenge Tour Money List and he hopes this bodes well for his goal to compete on the Sunshine Tour next season.

“I’m really pleased that I kept calm and composed during the round,” said the Sunninghill native. “It just goes to show how much I’ve learned this season to cope with the pressure. This win takes me to ninth on the Money List after 14 tournaments, and I’m really happy with my progress.

“This gives me a lot of confidence and hopefully I can play my way into the top 10 on the Big Easy IGT Challenge Tour in the last five events to go straight to the Sunshine Tour. But if I don’t, this still helps me to build experience for Q-School. Ultimately, my goal is to step it up to the next level.”