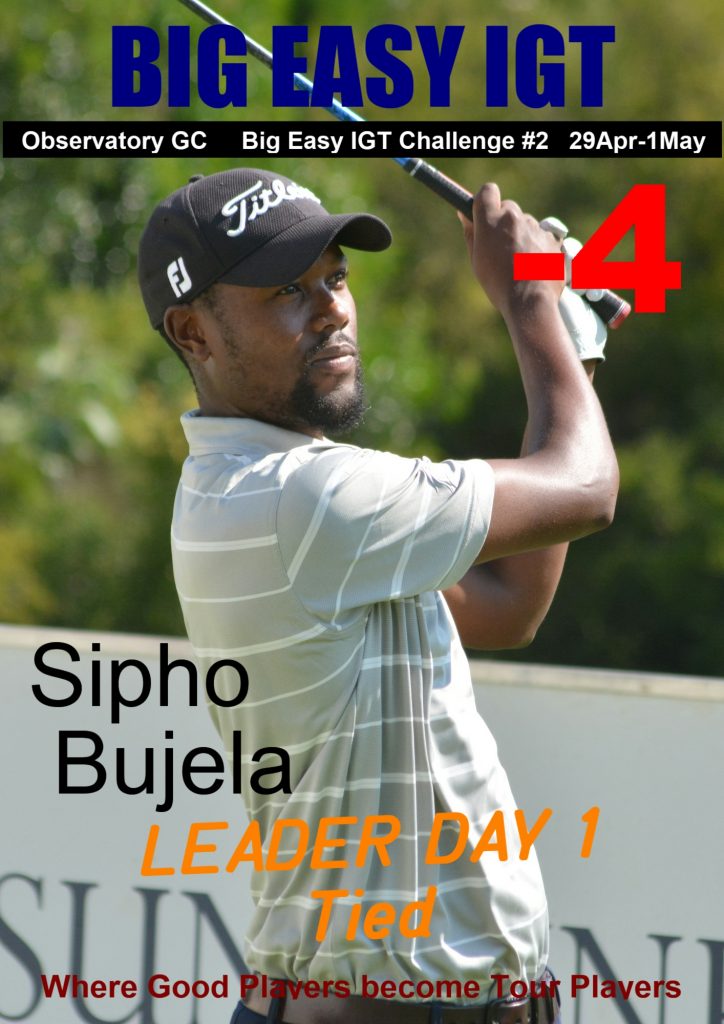 JOHANNESBURG, 29 April 2019 – Gary Player School member Sipho Bujela birdied the closing hole at Observatory Golf Club to grab a share of the top spot in the first round of the Big Easy IGT Challenge Tour #2 with Coert Groenewald and Swiss golfer Neal Woernhard.

The Soweto golfer competed in the Vusi Ngubeni Qualifying School at the same venue in March and used his local course knowledge to open with a four-under-par 68.

Groenewald also made the most of the benign conditions in the morning surge into the lead, while Woernhard – who got the brunt of the gusting wind in the afternoon – racked up four birdies to make it a three-way tie at the top of a very congested leaderboard.

No less than five players sit at three-under, with a further 10 players tied for ninth on two-under.

Bujela decided to skip the Investec Royal Swazi Open to work on his game and was pleased with the early results.

“I would have had to play the qualifier and I felt that playing the Big Easy IGT event to work on my game would be a better option,” said the 29-year-old. “I’m battling a bit with the driver, so I am using this week to sort it out so I can be ready for the Lombard Insurance Classic in Swaziland next month.

Early birdies at the second and fourth holes brought a smile to his face.

“The weather was pretty good this morning with clear skies, and I wanted to make the most of the conditions,” Bujela said. “The first tee shot was tough, straight into the sun. I missed it right, but it was far enough right to leave me with a good angle and I made a good par save to start.

“At the second hole, I hit the fairway to the right, but I had a low overhanging branch in the way. I hit a low fade that ended up just short of the green and I made a good up-and-down for birdie. I hit a strong 7-iron into the par three (fourth). My playing partner Reinard (Blaauw) was two metres further and I got a good line from him and boxed the birdie putt.

“I hit a poor tee shot at the seventh and we struggled to find my ball. I punched out and hit a sand-wedge in. I had a 15-footer for birdie and two-putted,” he explained.

“The wind started to blow at this stage and the ninth was straight into the wind. The tees were set back, so it was playing quite long. I hit it down the fairway left, but it’s such a narrow approach, so I opted to lay up. I hit a really good third, but two-putted for par.

“I was happy to sink an eight-footer for birdie at the 10th. I hit a choke down wedge from 138 metres into a cross wind and drained the putt. But then I dropped at the next hole. It was very disappointing, because the 11th wasn’t playing that tough. I hit the wedge shot fat and caught the bunker.”

“I hit another wayward tee shot at the par five (14) and I was nearly out of time when we finally found my ball,” said Bujela. “I managed to save par and birdie 15. At the last hole, I hit a great drive straight down the middle, sand-wedge to 10 feet and boxed the birdie putt.

“I was surprised that the scores weren’t lower, but this is a tough track when the wind gets up. We had a one-club wind in the morning, but it really got up in the afternoon. And with the tees pushed back, it’s tough to score into the wind.

“The ball striking is still a little erratic, but I definitely felt an improvement. Unfortunately I had a couple of bad drives, but I hit my shorter irons and wedges really well and if I can hole a few more putts, I’ll be really happy.”

In-form rookie Clayton Mansfield, coming off a runner-up finish in the season-opener at Centurion Country Club two weeks ago, fired five birdies for a 69 and a share of fourth with Jason Smith, Gerhard Pepler, Divan Marais and Gideon van der Vyfer.