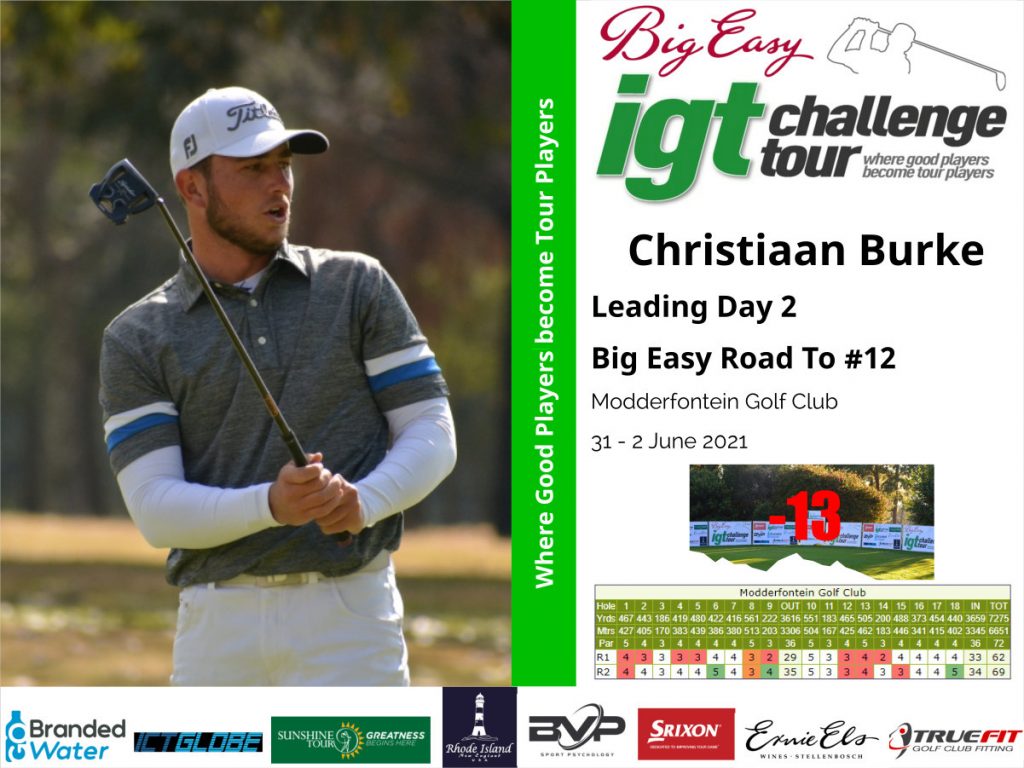 MODDERFONTEIN, June 1– Christiaan Burke maintained a two-stroke lead in the Big Easy Tour Road To Sunshine Tour #12 thanks to his three-under-par 69 which took his total to 13-under-par for the week at Modderfontein Golf Club on Tuesday.

Following a sparkling 10-under 62 in testing conditions on day one, Burke knew he had to work extremely hard to replicate that opening round and while he knew that achieving the same score would be difficult, any decent score would still see him in contention in the final round on Wednesday.

“The start of the round, the weather was quite nice with a little bit of wind,” Burke noted, “but when we hit the back nine, the wind started to pick up and made it a bit difficult. I hit the ball really well today and most of the birdies I made today were quite close to the hole. But a couple of three-putts cost me and led to drops on some of the holes.”

A birdie on the first hole was followed by four straight pars and a bogey, as Burke struggled to reproduce the magic of the first round. But a hole later, on the eighth and just as he had done on day one, Burke made serious gains there, making his second eagle in two days on that hole. A bogey followed.

“I hit a good drive left edge of the fairway and had 183 meters to the flag,” he said of his eagle on eight, “from there I hit a good 7-iron to two feet and boxed the putt. I was not too worried about what was happening with Ryan (Van Velzen), I just told myself to play my own game and see how low I can go today.”

Burke pulled himself together after the turn, making two pars before going birdie, birdie, par and birdie in what was a healthy run of birdies. Then on the last, he dropped once more to sign for a 69.

Van Velzen produced a bogey-free 67 to get to a tournament total of 11-under, giving himself a great opportunity to charge for the top in the final round.

A four-under-par 68 catapulted Makhetha Mazibuko to solo third at nine-under for the tournament and just four strokes off the lead while Bradley Diggeden is fourth on the leaderboard at seven-under for the week.

Dylan Kok, Keelan Van Wyk and amateur Sam McKenzielie in a share of fifth at six-under-par and seven shots adrift.