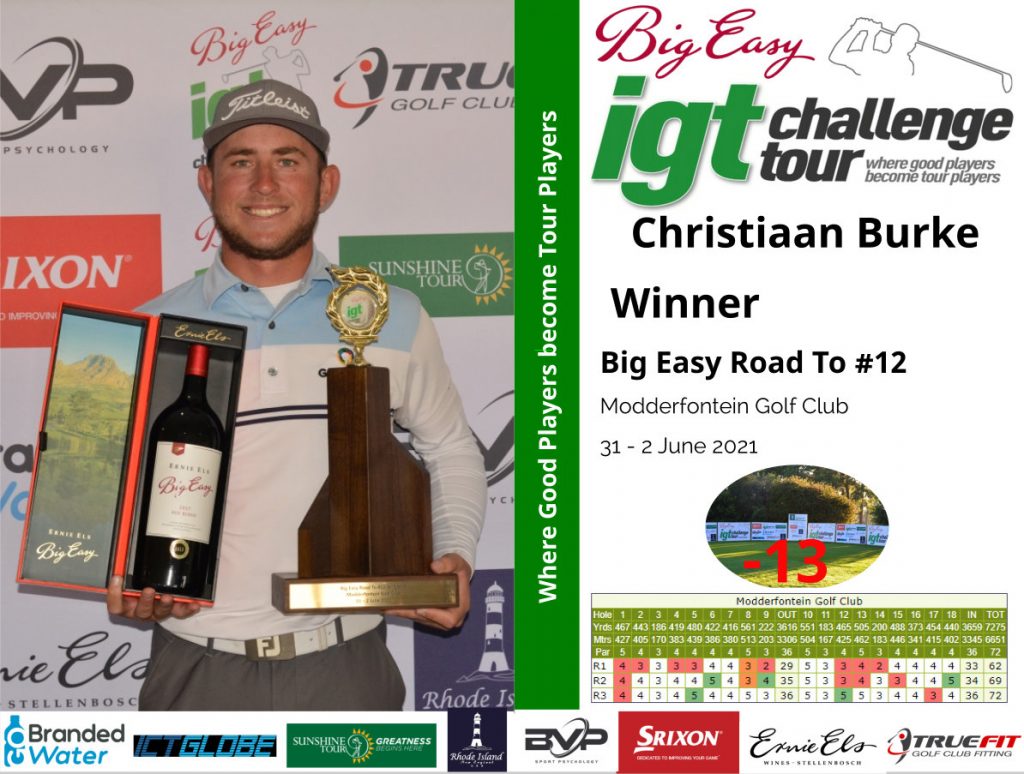 Burke works hard for his breakthrough win at Modderfontein

MODDERFONTEIN, June 2– Christiaan Burke said the final round of the Big Easy Tour Road To Sunshine Tour #12 was tougher than the first two but the hard work he put in and the pain endured was all worth it after he emerged a three-shot victor on Wednesday.

“Today was tougher than the previous two days,” said the GolfRSA National Squad member after his even-par final round. “It was cold and the pin positions were a little trickier. But it’s great to finally win. I’ve been working hard to get this win and it finally came, so I’m really happy about it.”

He was two strokes ahead of the pack – led by Ryan Van Velzen at 11-under – when the final round teed off. A birdie on the first got him going, picking up pars in the next four holes as birdies proved hard to come by.A bogey on the fifth got him back to level-par as the back nine beckoned for Burke.

He steadied himself after that drop and made six straight pars in what was a strong attempt at keeping the big numbers at bay. Another drop, this time on 12, threatened to turn his round upside down but the Potchefstroom Golf Club amateur stood strong, birdieing the 17th for an even-par final round and his maiden Big Easy Tour title.“

I just told myself to hit as many fairways and greens as I can,” Burke revealed, “and I just thought I needed to maintain my confidence and try not to make silly mistakes. It was great to get it done because now it gives me confidence to know that I can compete on higher levels of the games.”

Burke joins a sparkling list of GolfRSA squad members who are shining and claiming titles on both the Big Easy Tour and the IGT Challenge, including Casey Jarvis and Christiaan Maas among others.

Van Velzen will be disappointed at not having added another trophy to his already glittering cabinet this season, having won numerous times already this season. Tied for second with Makhetha Mazibuko at 10-under-par for the week, Van Velzen will know how close he came and will want to go one better next time.

Since his win at the Rustenburg Legends Pro-Am on May 15, Makhetha Mazibuko has shown glimpses of the form which had many pundits tout him as one for the future in seasons gone by, and knowing that he lost out only by three shots will have him looking forward to the next challenge.