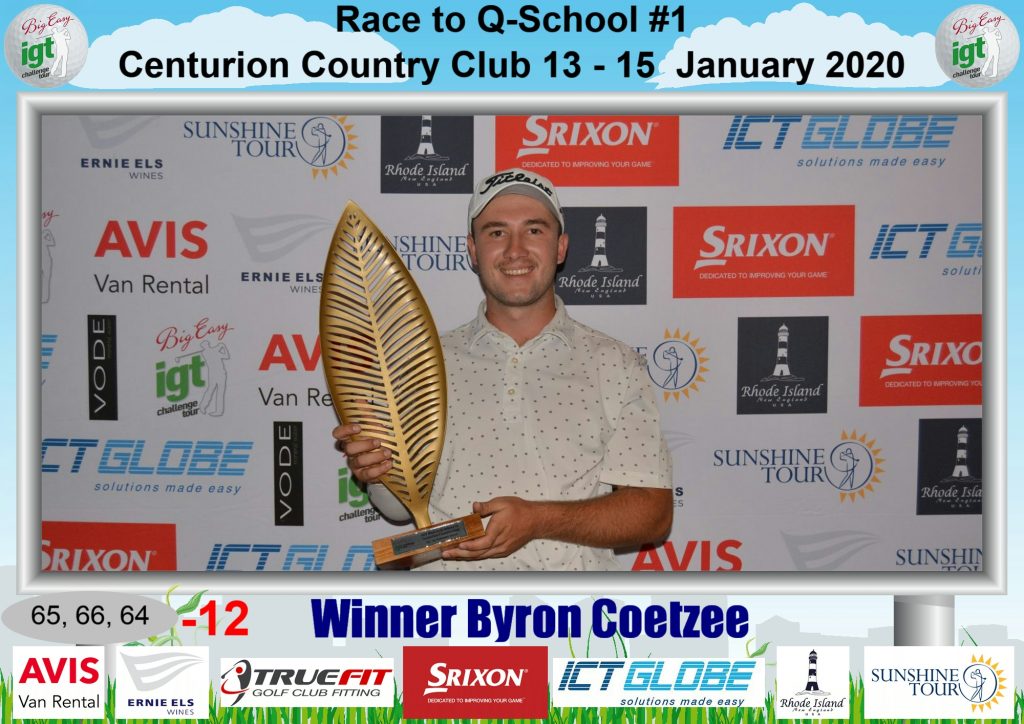 CENTURION, 15 January 2020 – KwaZulu-Natal rookie Byron Coetzee employed a carefree attitude on his way to a final round five-under 64 to win the Race to Q-School #1 at Centurion Country Club by a shot on Wednesday.

Despite a poor warm-up session just before his round, the 20-year-old was able to refocus, which paid dividends as he finished the IGT Challenge Tour Q-School prep series on 12-under for the three rounds – a stroke ahead of Southern Cape’s Jack Duthie, who closed with a 68 for second place on his own.

Neal Woernhard from Switzerland and Kempton Park’s Jason Froneman both finished on 10-under in a share of third.

Froneman held the 36-hole lead on 12-under with Duthie two shots back and Coetzee in a tie for seventh on seven-under at the start of the day. “I was hitting it pretty terribly in the practice session, but when I got to the first tee, a cloud of calm came over me. I decided to forget about where I was lying. So I just went out there and tried to enjoy myself,” said Coetzee.

The Kloof Country Club golfer was out of the blocks quickly with five birdies and a bogey on his outward loop.

“I started with a birdie on the first, and then I made another at the third – so I just decided to go for it. On the sixth I hit driver down the middle and hit it close from 63 metres, so I was really happy to be three-under through six.

“The seventh hole was changed from a par five to a par three due to the recent flooding in the area.I came up short with the tee shot and made my only bogey of the tournament. But then I thought it was good to get it out the way. So as soon as I made that drop, I came back with two birdies.”

Though he only made one more gain on the back nine, he was bogey-free, which was enough to claim the victory.

“On the 12th I hit the green in two and left my eagle putt hanging on the lip, but it didn’t drop, so I tapped in for birdie,” Coetzee said.

It was a second victory as a professional for Coetzee, after he first tasted success at the Big Easy IGT in Krugersdorp in October last year.

“It definitely means a lot to win, but I have a lot to work on still. I want to play at least another two tournament before Q-school to keep myself tournament-ready,” he said.

“I didn’t expect to win. The first two rounds I was bogey-free, but I felt like I could be a lot better. It didn’t feel like I had my A-game.”

While most players take considerable time before deciding to turn professional these days, it was through a national team non-selection that forced Coetzee into moving into the paid ranks.

“I had a good end to the 2018 season with a win and a couple top-10s, which helped me rise up the GolfRSA Open Amateur rankings,” Coetzee explained. “I was trying to get my South African colours as an amateur, but unfortunately I didn’t get chosen, so I decided to turn pro halfway through the Big Easy season.”

The Sunshine Tour Q-School now lies in wait for the young pro, who will tee it up with countless other hopefuls at Houghton Golf Club starting on February 2.

It would be a dream come true for Coetzee if he were to earn one of the most coveted playing-cards in all the fairways of this land. “It would be amazing to get my Sunshine Tour card. It’s all I’ve ever dreamt of.”

In fact, Coetzee draws inspiration from one of his idols, Sunshine Tour campaigner Martin Rohwer, who finished in a tie for sixth at the SA Open last week. If he keeps up his stellar play, Coetzee might well be joining Rohwer in a matter of months.