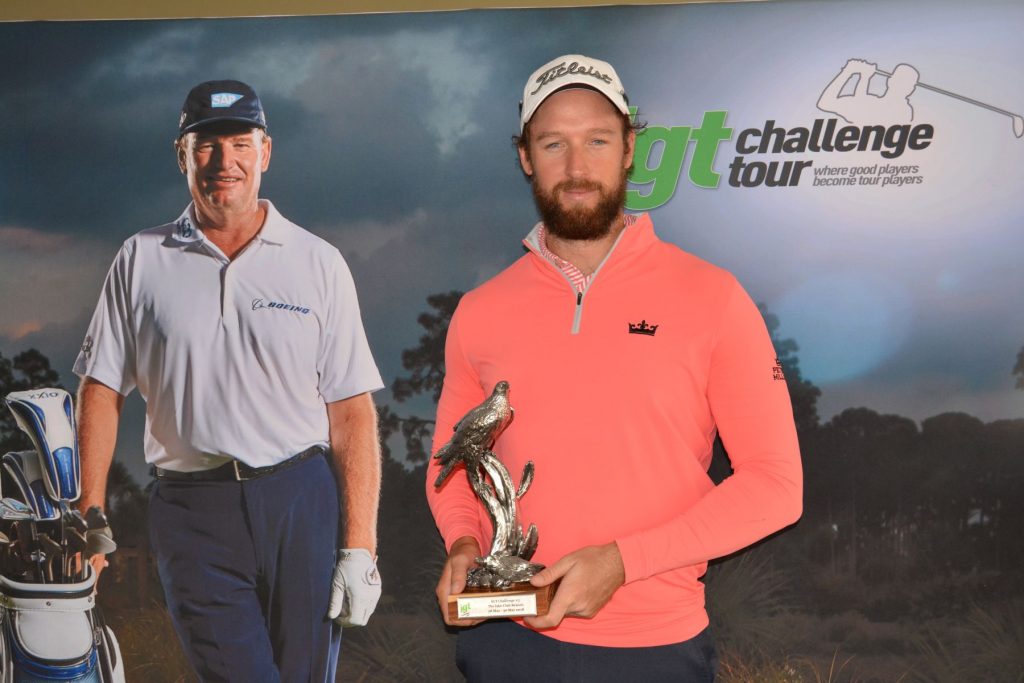 BENONI, 30 May 2018 – Chris Cannon from England become the second man in two weeks to hand Heinrich Bruiners the bridesmaid tag when he holed a chip-shot at the second extra hole to win the IGT Challenge Tour #5 in Benoni on Wednesday.
Just a week after he lost to Dylan Mostert at the first play-off hole in the third Big Easy IGT Challenge at State Mines, the George golfer was back in contention with rounds of 69 and 66 at The Lake Club Benoni.
Bruiners headed into the final round with a three shot clearance and fired three birdies on the bounce to cancel a bogey start, but the Gary Player Class of 2018 member must have experienced a case of déjà vu as Cannon also chipped away at his lead.
Cannon fired seven birdies, including three through the turn, to post a flawless seven-under-par 65.
Bruiners couldn’t recover from a bogey at the par five 15th. He signed for 68 to match Cannon’s total of 13 under and forced the tournament into over-time.
Both players had the opportunity to clinch the title on the second trip down 18.
“My birdie putt never really had a chance” said Cannon. “Heinie hit a great putt that looked like it was going in all the way, but it let out just before the hole.
“My third tee shot down 18 finished just off the fairway left. Heinie hit driver into the bunker and his trap-shot went long. It was a tricky pin left next to the water, but I hit my approach dead on line. The wind pushed back, though, and I finished about three yards short of the green.
“I hit a lot of chips close this week, but none went in. I just felt it was about time one dropped and down the hole it went. Heinie hit a great putt from fringe, but it came up just short. I’m really pleased with the way I played this week and to cap it off with a win was great.”
Cannon competed on the Asian Tour and Asian Development Tour in 2015 and 2016 and played some events on the Mena Tour, based in the Middle East, but an invitation to compete in the Alfred Dunhill Championship in 2016 led him to the Sunshine Tour.
“It was amazing to play at Leopard Creek and to see how the Sunshine Tour operates,” he said. “My dad, through his contacts with Mr Johann Rupert and Ernie (Els), arranged for me to stay with Rurik Gobel while I went to Q-School. I was really happy when I got my card, because the Sunshine Tour is a very competitive circuit, with a lot of tournaments and we play at top courses.
“I played the IGT before, as well, and also found it just as competitive. It’s great to have two strong circuits here in South Africa so you can stay competitive. And it makes great sense to use the Sunshine Tour as a stepping stone to the European Tour, especially with the co-sanctioned events.
“I had a really solid week of ball-striking and the short game was very good. I hit eight fairways in the final round, but 16 greens in regulation. Apart from a 12-foot birdie at the first and a 15-footer for birdie at 17, all my birdie putts was inside five foot.
“Hopefully this game gets me into the final group on the last day at Sun City. I won’t be surprised to see Heinie in the last group, though. To finish in two play-offs back-to-back you must be playing some really great golf.”
Gauteng rookie Hayden Griffiths closed with a 67 to finish alone in third, four shots clear of Lejan Lewthwaite, Jason Diab and former Sunshine Tour Q-School winner Herman Loubser.