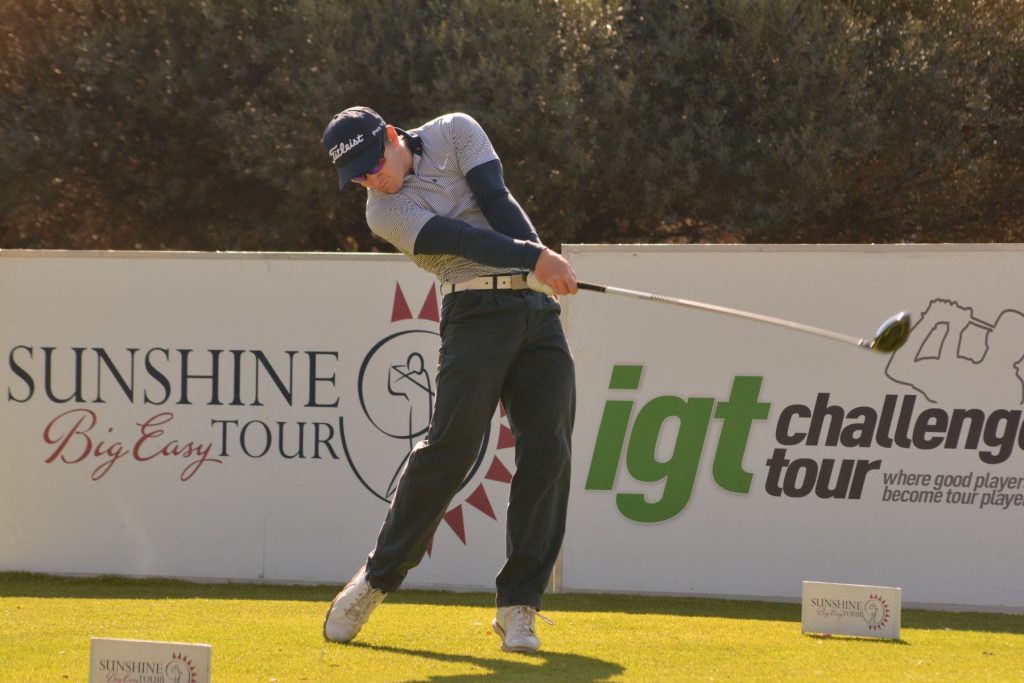 PRETORIA, 2 July 2018 – A spectacular eagle from a perfect trap shot saw Estiaan Conradie soar into the lead at the conclusion of the first round in the Big Easy IGT Challenge Tour #6 on Monday.
The defining moment of Conradie’s round came on the 18th hole at Centurion Country Club and empowered the Pretoria golfer to set the first round target at six-under-par 66.
He will start the second round with a one shot advantage over Pretoria amateur Christopher van der Merwe and Matt Bright, the winner of last week’s event at Killarney.
The 20-year-old rookie from Wingate Park rookie graduated from the IGT Challenge Tour at the Sunshine Tour Qualifying School in March. Food poisoning, followed by a bout of flu derailed the start of his season, however, Conradie showed off the game that won him the IGT Challenge Tour Race to Q-School rankings at Sun City last month.
He earned his first pay cheque with a top 10 finish in the Sun City Challenge and he followed up with a top eight in the fifth Big Easy IGT Challenge Tour at Killarney.
“It’s been a frustrating start to the season, especially because I was so eager after Q-School,” said Conradie. “First came the food poisoning and it really weakened my system. I picked up flu during the Zimbabwe Open and I battled to lift a club. I couldn’t shake it and it really impacted on my game.
“But we had a break and I rested and I was back to full strength when we headed to Sun City. It was such a relief to put three decent rounds together and to celebrate my first pay day. Now I just want to try and make up for lost time.”
The Wanna Be A Champion Academy golfer cancelled a bogey start with birdies at 12 and 15 and the two at the par four 18th took him to the back nine on three under.
“I hit my tee shot left into the fairway bunker and duffed the bunker shot,” said Conradie. “Didn’t up and down for par, but I got it back to level with a good chip and putt at 12. I hit a solid drive down the 15th fairway and hit my second over the green, but I made another good up-and-down for birdie.
“At 18, I hit 3-wood off the tee and it drifted a little right into the bunker. I was about 15 metres out and I holed the trap shot. That got me to three under and I made three more birdies coming home. I two-putted for birdie at the first, hit an 8-iron to give at the third and found another greenside bunker at seven.
“Made that up-and-down for birdie, too. Lots of bunkers today, but I am striking the ball well and my short-game is on song again. It feels like I’m finding my stride again and it’s really nice to be in the mix, because it’s been a while.”
Van der Merwe returned a flawless 67, while Bright reversed two bogeys to grab a share of second on five under.
Gary Player School of 2017 member Heinrich Bruiners opened with a 68 to finish in the bus at four-under alongside Jason Roets, Neil Herman, Stefan Wears-Taylor, Matthew Spacey and Sunshine Tour Q-School winner Thriston Lawrence.