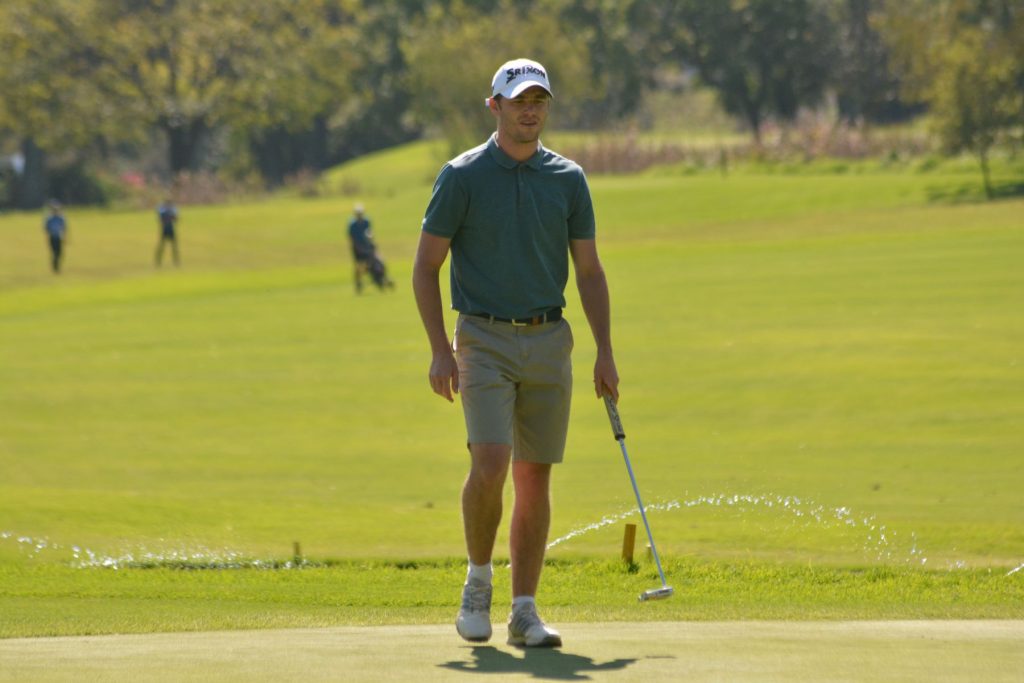 TSHWANE, 8 May 2018 – Marco de Beer produced a solid short game over the last nine holes at Wingate Park Country Club to edge into a one shot lead, while former three-time World One-Arm champion Reinard Schuhknecht put the finishing touches on his preparation for the upcoming Canon SA Disabled Open in Tuesday’s second round of the IGT Challenge #4 Wingate.

De Beer fired five birdies on the back nine for a three-under-par 69 that moved him to the top of the pile at seven-under 137, one shot clear of joint overnight leader Ruan Korb, who carded 70.

De Beer overcame a bogey start with a birdie at the second, but he dropped further shots at four and nine. The 22-year-old Zwartkops golfer was two-over at the turn and four shots behind Korb, but he turned up the heat over the last nine holes to take the sole lead.

“I knew I needed to get some birdies to get back in the fight,” he said. “I wasn’t striking the ball well over the first nine holes, though, and I had some soft drops. My rhythm was a bit off, so I went back to my process and tried to get the rhythm issue sorted out. It worked for me. I only had nine putts down the stretch, but I also scrambled really well whenever I hit a poor shot.”

The Wanna Be A Champion Academy player picked up his first birdie at the par four 11th and made three birdies on the bounce from 14 before chipping in for birdie at the closing hole.

“I hit it to tap-in distance at 11 and holed the trap shot from the left bunker at 14,” said De Beer. “At 15, I got it on the green in two, lagged it close and made the birdie putt.

“I hit it to give at 16 and made a good par at 17. At the last hole, I pitched the ball next to the flag, but it bounced and rolled off the green. I was about 15 feet short of the hole and I chipped it in.

“Coming back strong over the last nine holes was a good confidence builder. It showed me just how much my mental game has improved over the last year and that will be important in the final round.

“I’m still chasing a maiden win on the IGT Challenge Tour, so it’s nice to go into the final round in front. There are still 18 holes left to play, though, so I’m not counting any chickens. I will try to keep my head in the game and focus on what I can control and see what it takes me.”

Schuhknecht from Vanderbijlpark is also targeting a maiden victory.

The one-arm golfer will lead the 71-strong field in the Canon SA Disabled Golf Open at Magalies Park Golf Club from 13-15 May and, despite a couple of close calls in the last 10 years, he is still chasing the crown jewel of South African disabled golf.

Although he missed the cut at Wingate Park with rounds of 84 and 85, Schuhknecht was feeling quite optimistic about his chances next week.

“It was great to get into the competitive vibe ahead of the SA Open,” he said. “It’s so great to have a circuit like the IGT Challenge Tour where I can play to get competition ready.  The competition was strong and the course set-up was tough, but I was able to test my game and tweak a few things and I feel a lot more confident about next week.”