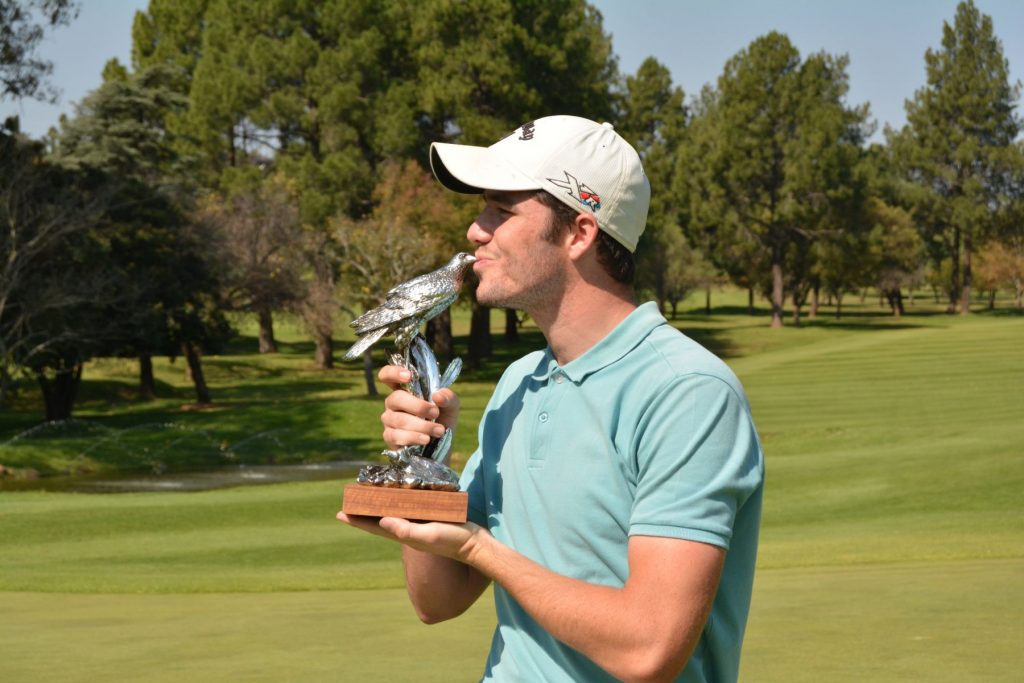 TSHWANE, 9 May 2018 – Marco de Beer had to fight his way back to the front for a third successive round, but this time a well-executed rally over the last nine holes at Wingate Park Country Club netted the Zwartkop golfer his maiden IGT Challenge Tour victory on Wednesday.

The 22-year-old De Beer led the field with rounds of 68 and 69 and closed out a one stroke victory on eight-under 208 in wire-to-wire style with a hard-fought for final round 71.

“This was a real test of patience,” said the Wanna Be A Champion Academy golfer.

“I struggled over the first nine holes every day and I had to rally hard on the back nine to make up the lost ground and today was no different. On top of that there was the stress of playing for my first win, but I have to say it was a good stress. This was a huge learning curve, having to deal with the early setbacks and then fight back for the win.”

De Beer shared the first round lead with fellow Tshwane professional Ruan Korb, but he own the outright lead after 36 holes and began the final round on seven-under with a one stroke lead over the Silver Lakes golfer.

“I let Ruan in the door right away when I drove it in the trees left,” said De Beer. “I couldn’t up and down from short of the green to save par at the first, but I made birdie at the second to take back the lead. Then Ruan birdied the third and I dropped another shot at four. When Ruan birdied the sixth, I was on the back foot. Again.”

Korb led the field around the turn at eight-under, with De Beer two shots back and tied with Van den Berg, who birdied two and four in the opening loop.

The trio played the first three holes to par, but the status changed dramatically at the par five 13th.

“I made a birdie, Tokkie made par and Ruan dropped two shots,” said De Beer. “In that one hole, the momentum swung back in my favour.

“Ruan laid up left and I went for the green. I cleared the bunker, but I was just short of the green. The pin was back left, so I putted up and holed the second putt for birdie.”
Korb was behind trees after his second and his third shot clipped a branch, sending the ball back into the trees .He punched out and got on to green, but three-putted for seven.

He dropped another shot at 14, but Van Der Berg – playing in the group ahead – moved into the lead with birdies 15 and 17. Determined not to be denied, De Beer grabbed a share of the lead with a brace of birdies at 15 and 16.

“I made a great up-and-down from the bunker at 15 for birdie and holed a huge right-to-left swinging putt from 30 foot at 16 to get back to eight-under,” he said. “I figured I’d have to make a birdie at 18 at the very least to get into a play-off, but after we played our tee shots, I heard that Tokkie finished with a double bogey. That took some huge pressure off. No need to get fancy and throw it away, so I just made sure I got on the green in three and made the two putts to win.

“I got disqualified during the final stage of Qualifying School in March because I signed for an incorrect score. One wrong number and my dream was over. That day it felt like the end of the world, but I’m a great believer that everything that happens to us, happens for a reason.

“Yes, it was a setback and very a tough lesson, but it was also an opportunity to use the next 12 months to learn, to gain more experience and to start winning. I refused to let it get me down and it’s a great feeling to lift a trophy on the IGT Challenge Tour. One box ticked.”