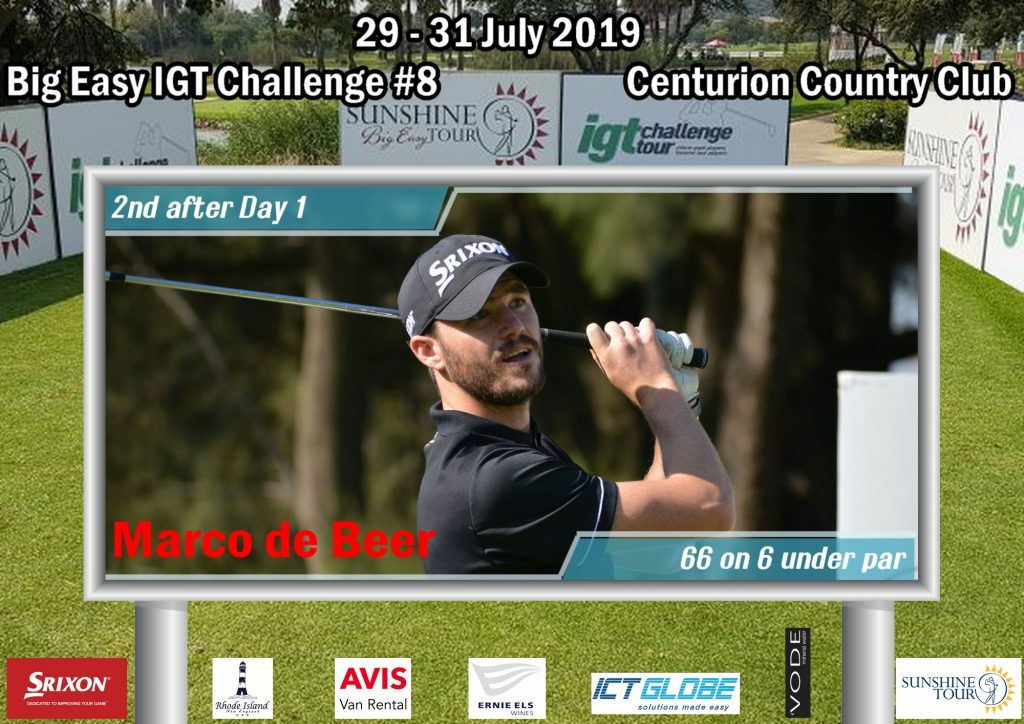 PRETORIA, 29 July 2019 – Desne van den Bergh grabbed the first round lead on the Big Easy IGT Challenge Tour, but the Vaal de Grace golfer will have keep a large chasing pack at bay led by Marco de Beer as he targets a maiden win at Centurion Country Club.

For a second straight week, Van den Bergh put himself in pole position with a seven-under-par 65 on Monday, but as the first round action wrapped up, no less than 14 players – including two local favourites – moved within striking distance of his target.

De Beer from Serengeti Estates is just shot adrift, with Malcolm Mitchell from Kloof, Vryburg’s Leon Vorster and Reinhardt Blaauw from Centurion two shots back. Centurion’s Arno Pretorius and Jason Smith with start the second round on four-under.

A week ago, Van den Bergh co-led with the field in the seventh event of the season with a six-under-par 64 at Killarney Country Club, but slipped to a tie for fourth with successive rounds of 72.

“That’s nothing new; I’ve had three or four runner-up finishes on the Big Easy, but I am a patient man,” said the 29-year-old after he offset a brace of bogeys with nine birdies.

“The goal this season is greater consistency and top five finishes. I want to be in the top six at the end of the series to gain a free pass to the Sunshine Tour. I’m not consciously thinking about a win, but a trophy finish would be a great bonus, because it will boost my ranking.”

While Van den Bergh’s good run of form has boosted him to sixth on the Big Easy IGT Challenge Tour money list, De Beer hopes his low start will turn his mediocre season around.

The 24-year-old Wanna Be A Champion Academy player received a limited Sunshine Tour card after Q-School in March.

“I was so stoked when I qualified and made the cut in the Lombard Insurance Classic in Swaziland in May, but my results on the Big Easy IGT Challenge Tour has been well below par,” he said. “I’ve only made two cuts in six starts and it’s just been a frustrating season so far.

“I seem to start off well, but bomb out in the second round. I’ve put a lot of hours into my short game in the last few weeks and today, I felt for the first time that the graft paid off.”

A birdie-birdie start set De Beer up for his lowest round of the season.

“I had a soft bogey at four, but birdied five and had two more birdies to turn four-under. On the back nine, I birdied 12, dropped 13 and finished with a pair of birdies. On 17, the pin was set right back and I hit a pitching-wedge six-feet left and on 18, I hit a 2-iron 10 metres past and two-putted.

“I missed a few fairways but only just. Nothing dramatic, and I hit my wedges great. But my putter was really hot. I had six one-putts on the front nine and only 16 putts in my round. I kept the momentum going with solid pars and I was never in any real trouble.

“Mentally, I gained a lot of confidence and I feel way stronger than I have in the last couple of weeks. Now the biggest hurdle will be to stay in a positive head-space and keep the form going to turn my season around.”