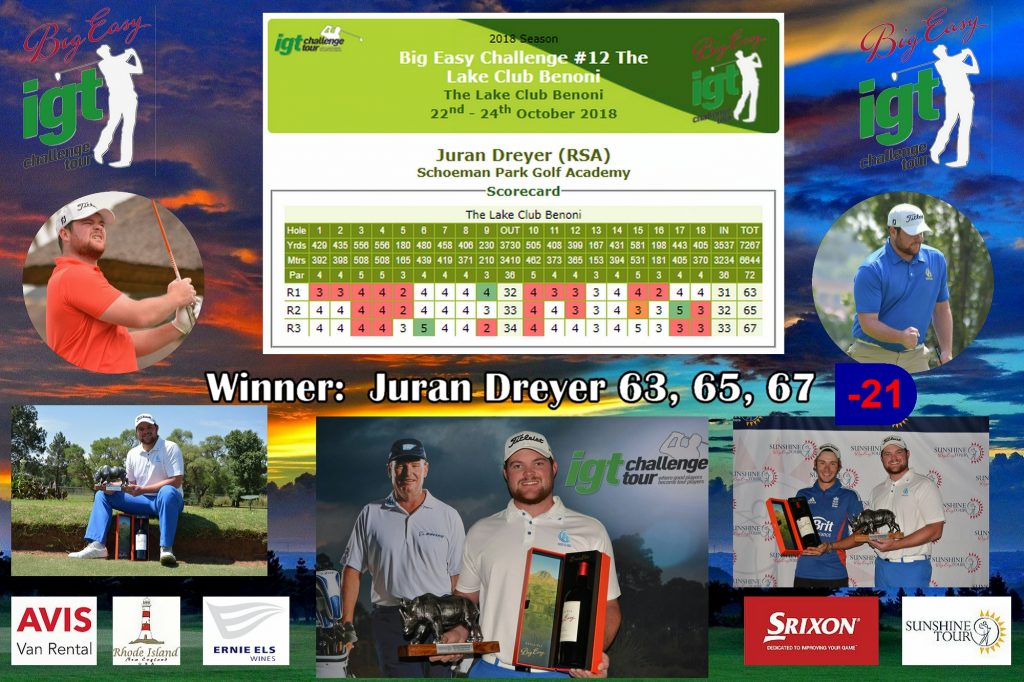 BENONI, 24 October 2018 – Juran Dreyer completed his march to maiden professional victory with a cool performance in the Big Easy IGT Challenge Tour #12 on a hot and windy day in Benoni.

Earlier rounds of 63 and 65 set Dreyer on the road to glory and he carried a six shot overnight lead going into the final 18 holes at The Lake Club Benoni on Wednesday.

The 23-year-old Free State rookie didn’t hold back and gave no-one a chance as he fired a five-under-par 67 to closed out his breakthrough on South Africa’s developmental circuit with a nine-shot victory on 21-under-par 195.

“When I led the field into the final round of the Big Easy IGT #10 at Services, I played conservatively and came back to bite me,” said Dreyer. “The standard is too high and there are a bunch of guys hungry to win, so you can’t afford to play like that. The putter wasn’t as hot, but my ball striking was on song and I went for the shots.

“I didn’t hold back today and it paid off. I’m over the moon with this win. This is what I’ve worked towards all season and it’s extremely rewarding to hold a trophy in my hands.”

Dreyer warded off an early challenge from playing partner Tokkie van den Berg with a brace of birdies at the third and fourth holes, and still had a five shot lead at the turn.

“I knew if I could birdie the first two par fives it would set me up nicely,” said Dreyer.

“I missed the fairway right at the sixth right and hit a great punch shot left of the green, but missed the par-putt after a great chip. That was only my third bogey of the week, and it didn’t bother me. I got it back to three-under with a great birdie at nine. It’s a tough little par three and the wind was across left to right. I flushed an 8-iron and holed a five-footer for birdie.”

Van den Berg matched Dreyer’s birdie at 10, but the Pretoria golfer failed to capitalise on birdie chances to close the gap. He found the water at the par-three 16th and the resulting bogey saw the Pretoria golfer slip to eight shots back and he finished in second on 204 after pars at the final two holes.

Big Easy IGT Challenge Tour #14 winner Luke Brown made a valiant charge with an eagle at 10 and birdies at 11 and 12, but his effort to catch up to Dreyer was thwarted by a double bogey at 16 and a bogey at 17. Brown closed with a birdie for a round of 66 to grab a share of third alongside Paul Boshoff, Dylan Kok and Jason Roets.

Dreyer had straight pars from 11 to 16 and finished with back-to-back birdies.

“I split the fairway at 17, hit my second to 10 foot and holed the birdie putt,” said Dreyer. “I went for the green at 18, but ended up on the wrong side of the trees on the right. I had 60 feet to the pin, so I hit a high shot over the trees to two feet and tapped in for birdie. This was a much better performance and I felt in control throughout. Even though the putter wasn’t as hot, I never doubted myself.”
The victory boosted Dreyer to from ninth to third in the Race to Sunshine Tour Rankings.

“Now the hard work really starts,” said Dreyer. “Only the top 10 guys get cards to the Sunshine Tour after the Big Easy Championship. I’m in a great position now, but there four events left in the season and it’s only going to get more pressure-packed as we head to the Big Easy Championship the rest of the challengers faltered. The pressure is on to protect my position.”

The next Big Easy IGT Challenge Tour event – number 13 – will be played at Eagle Canyon Country Club from 29-31 October.