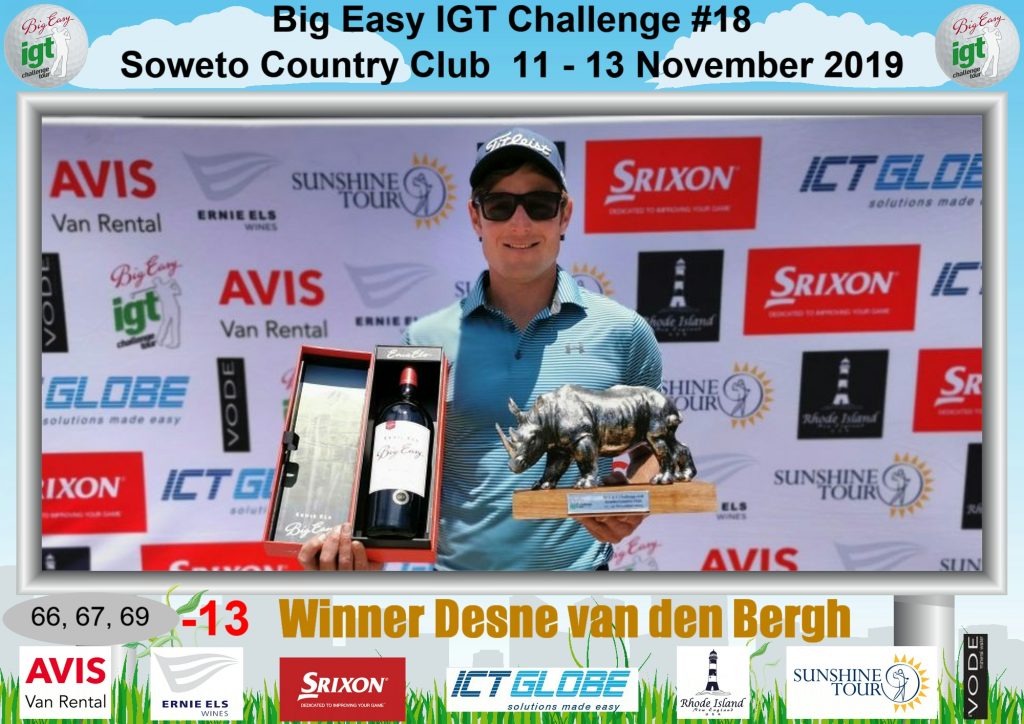 SOWETO, 13 November 2019 – Desne van den Bergh fired a flawless three-under-par 69 in the final round at Soweto Country Club to reel in a timely second victory of the season on the Big Easy IGT Challenge Tour on Wednesday.

The season wraps up with the Big Easy IGT Tour Championship at Centurion Country Club from 27-29 November, where after the top six ranked players will gain free passage to the 2020/2021 Sunshine Tour.

Van den Bergh’s one-shot victory on 13-under-par 203 over Malcolm Mitchell from Kloof Country Club and Stellenbosch rookie Karl Ochse came with a R10 500 pay-day, which boosted him to fifth in the Road to Sunshine Tour Order of Merit.

“Talk about timing,” said the 29-year-old Vaal de Grace golfer, who first joined the winners’ list with his triumph at Centurion Country Club in the eighth event in July.

“This win took me past Coert Groenewalk and I’m just short of the R45 000-mark. That’s a huge relief, because I have a much bigger cushion over the guys in the bubble to take to the final.”

Van den Bergh said he held nothing back in the final round, but relied on a very reliable swing and a hot putter to get to the winner’s circle.

Heading into the final round with a two-shot lead after opening rounds of 66 and 68, Van den Bergh parred the opening hole before he reeled in back-to-back birdies on the par three second and par five third holes.

“Malcolm went ahead of me and he actually gave me the club on the short hole,” Van den Bergh said.

“We had 150 metres with the wind into us from left to right and he hit a 7-iron. The folks around the green clapped for him, so I also went with the 7-iron and also got some applause. When we got there, I was just a foot and a half from the hole and he had a six-foot putt. He and Karl both missed and I birdied to go three shots clear.

“On the par five, I hit my driver straight down the middle. I hit a 7-iron approach that came up just short left, but I chipped it to six feet and made the birdie putt. I just kept it solid to the turn. On the back nine, I didn’t take advantage of the first par five (10th), but managed to birdie the 12th.

“I leaked my tee shot into the trees on 10 and had to punch out. On 12, I hit a good drive and wedged it on the green. I had 24 feet for eagle, and I left the putt in the mouth. I had a chance on 16, but the putt went in the hole and horse-shoed out.

“On the last hole, I didn’t have a great lie after the tee shot, and had to hit a huge cut 7-iron in to the green. It came up short, but I chipped it to two feet and holed for the win. I had a really great ball-striking round, which is a huge confidence builder before the Tour Final.

“I never felt under pressure and I was never in any danger of dropping a shot. Although I missed a few fairways and finished short of the green a couple of times, but I trusted my short game and putter to save par.  I’m just going to work really hard with my coaches at the BDGA Academy over the next two weeks to fine-tune my swing and the other aspects of my game so I can put in another strong performance at Centurion.”

Mitchell has held the top spot in the rankings since his third Big Easy IGT win in September.

A final round 68 helped the Kloof rookie to further cement his lead, taking his earnings for the season to R68 187. He leads by more than R14 000 from second placed Jason Smith and is R18 000 ahead of Matthew Spacey in third.

Ochse may be out of the running for the Sunshine Tour cards, but he had reason to smile, too.

Only top 30 players on the Road to Sunshine Tour will tee it up in the finale at Centurion and the Stellenbosch rookie vaulted to 26th in the rankings, courtesy of his final round 69.

Meanwhile the Road to Sunshine Tour Transformation Order of Merit race concluded at the end of 18th event with rankings leader Allister de Kok from the Gary Player School of 2019, second-placed Dwayne Basson and Thabiso Ngcobo in third place earning their cards for the next Sunshine Tour season.