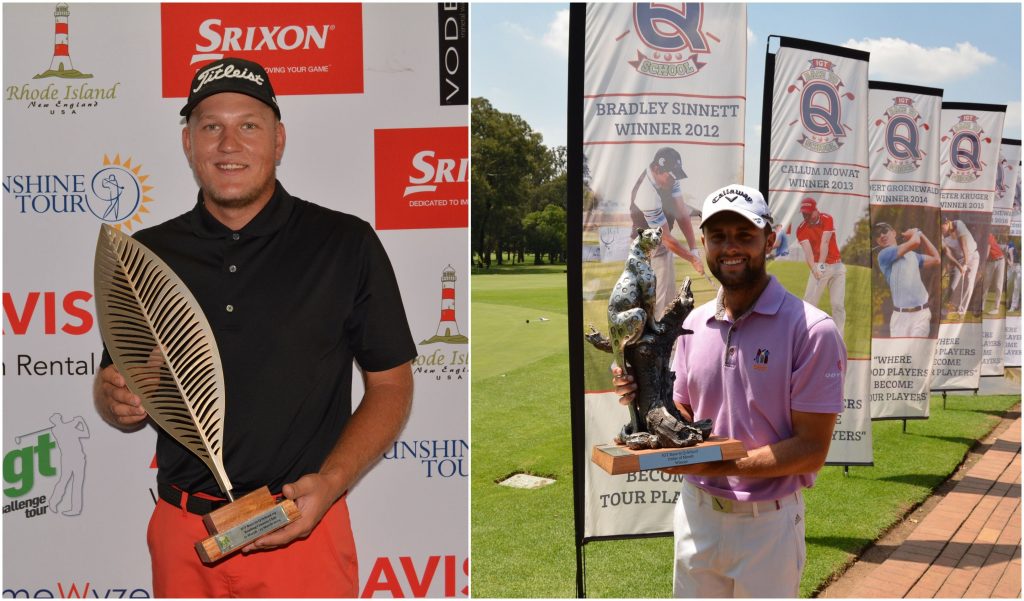 Double joy for Strydom and Barker at Reading

Double joy for Strydom and Barker at Reading

ALBERTON, 13 March 2019 – Former SA number one ranked amateur Tristen Strydom put a loud exclamation mark behind his return to form with a wire-to-wire victory in the Race to Q-School series finale, while Kyle Barker scored big for the “underdogs” when he won the Final Race to Q-School Rankings at Reading Country Club on Wednesday.

Just seven days after Strydom claimed his fifth trophy with a runaway 11-stroke victory at Akasia Country Club, the Pretoria golfer put on a golfing masterclass in Alberton to win back-to-back titles on the country’s premier golf development circuit.

Strydom surged to the top of the leaderboard with an opening seven-under-par 64 and kept ahead of the chasing pack with a second round 66. Taking a four shot lead into the final day, Strydom fired seven birdies for a flawless 64 to triumph by six strokes on 19 under.

“I’m seriously chuffed with my game over the last two weeks,” said the 22-year-old.

“The 2018 season was hugely frustrating and I had to work really hard to come back from injuries. I’m pleased that my game is at its peak, but I believe my mental growth and maturity has been key to the way I’m playing right now.”

After a birdie start, Strydom reeled in further gains at the second, third, sixth and eighth holes.

“I had a double at the first in the second round, so I was happy to redeem myself with a birdie start and set the tone for the day,” he said. “I wedged it to three foot on three, had an easy two-putt birdie at the par five and hit it to six foot at six.

“I hit the eighth in two and I knew I had a nice cushion heading down the back nine. The guys behind me were all firing, so I kept my foot on the pedal and stayed patient. I made a stack of pars and birdies at 12 and 17. It felt incredibly good playing 18 and knowing I’d done enough to win.

“I owe a huge debt of gratitude to my caddy, Kyle Lundy. He carried me through the dark times last year and kept me grounded as my form returned. He has helped me to never get ahead of myself and that’s probably the biggest lesson I’ve learned in the last 12 months.”
Strydom won the First Stage Qualifier at Eagle Canyon late last year by 14 shots and he hopes his purple patch will extend to another winning performance at the Final Stage at Houghton Golf Club next week.

“The back-to-back wins have definitely boosted my confidence in my game,” he said. “I feel I have prepared well, but I am going to take it shot-for-shot and hole-by-hole. Q-School is the most gruelling golf tournament you play and you need to stay in the moment.”

Barker, meanwhile, needed a top three finish to win the Race to Q-School rankings and the 21-year-old Randpark golfer pulled it off when it mattered the most.

“I kept an eye on the leaderboard and with three holes to play, I knew I needed a birdie to tie for third. I nailed it at 17,” said Barker, whose final round 66 earned him a share of third on 12-under.

Victory in the Race to Q-School #7 at Services a fortnight ago – his fourth professional title and third on the IGT Challenge Tour – boosted Barker to the top of the rankings and he edged out Strydom to win on 38 965 points.

“I’m dedicating this one to all the golfers out there who think they don’t have what it takes to be a winner,” Barker said. “I didn’t achieve much as a junior and I never won a provincial or national event on the Open Amateur circuit. I think only my close friends and family believed that I could make a go of it as a pro. So I want to send a message to all the “underdogs” out there with this win.

“Hard work, determination and a lot of grinding got me here. I never stopped believing in myself, even if other people doubted me. I put in a lot of hours and sweat to get to this level in my career. My message to the young golfers is that they should take things a step at a time. Pay your dues, the rewards will come. Don’t run before you can walk. Disappointment lies at the end of that race.”

The pot of gold at the end of the Race to Q-School Series was 15 starts for the IGT Challenge Tour campaigners – not already exempt – to compete in the Final Stage.

Serengeti amateur Bradley Diggeden sealed his spot with a tie for third.