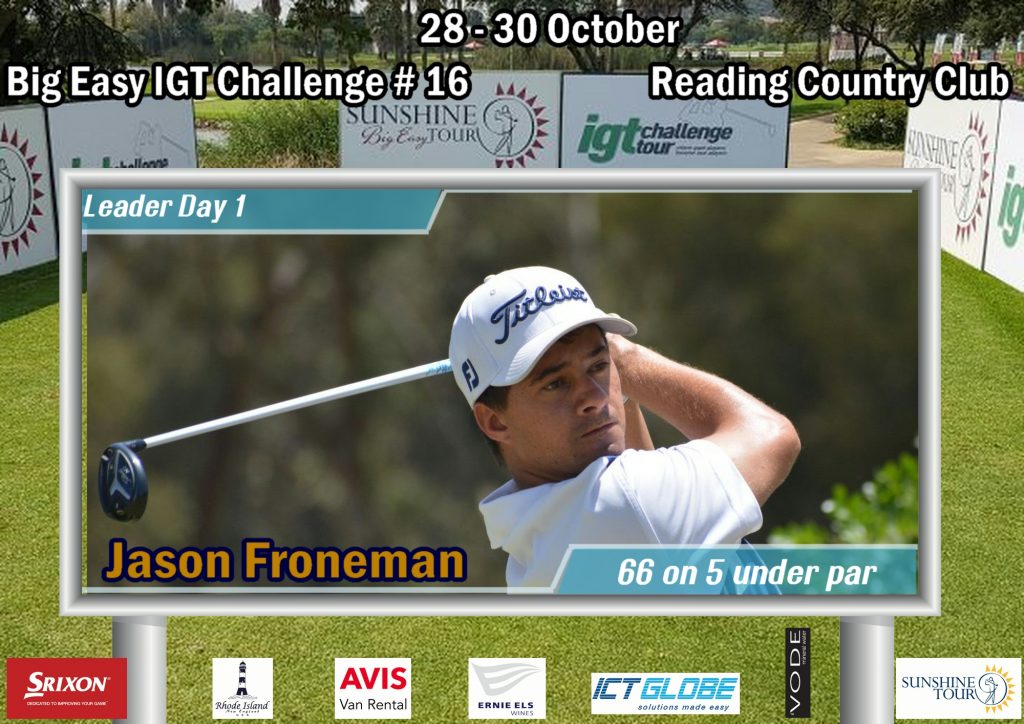 Mansfield fired a five-under-par 66 to lead the morning field, but Froneman made it a two-way tie with a blemish-free round in the late afternoon.

The pair leads by one shot clear of Gideon van der Vyfer, Angus Ellis-Cole and Thabiso Ngcobo, who currently sits in fifth on the Road to Sunshine Tour Transformation Order of Merit, with a further 12 players within three shots of the clubhouse target.

A week after he claimed his first title in the paid ranks, Byron Coetzee is also in the mix.

Froneman lost his Sunshine Tour card at the end of his third season, and his campaign to regain his playing privileges on the Big Easy IGT Challenge Tour with a has not gone to plan. After 10 starts, he is ranked 22nd – well outside the top six on the Road to Sunshine Tour who will gain cards. With only three events left before the Tour Championship, the 23-year-old Kempton Park golfer produced his lowest round of the season in Alberton.

“I approached the round with a level head and focussed on staying patient and keeping the ball in play,” Froneman said. “The course was playing tough with the wind up, but I really managed my game well and I love the greens.

“I put myself in good positions off the tees to birdie all three par fives and I managed to birdie two par fours – the 10th and 14th. On 14, hit a great tee shot down the middle close to the green and I relied on my short game to up-and-down for birdie. My best birdie of the day came on 10. I hit another good drive, hit sand-wedge in and holed a tricky putt.

“I made a lot of good par saves to keep my card clean, including a really good sand save on 11 to keep the round going. I really managed my game well and I need to keep it going for two more good rounds.”

Mansfield was equally pleased to make a strong start after missing the cut last week.

“Time is starting to run out, so missing the cut in Krugersdorp was not ideal,” said Mansfield, who ranks 15th in the Road to Sunshine Tour.

“I made a good up-and-down for par on 11 and holed a 25-footer for eagle on 12 that set up my day. The conditions were perfect over the first seven or so holes before the wind got up. I made a bunch of good pars and then bagged a couple of birdies.

“I hit 2-iron off the tee on the first, sand-wedge in and holed a 15-footer for birdie on the first. My tee-shot finished just short of the green on the second, and I chipped it to 10 feet and holed for another birdie. On the fourth, I made a great up-and-down for birdie after almost holing my second.

“I hit my approach in the greenside bunker and my chip hit the flag. Made the birdie putt and on the fifth, I hit gap-wedge to eight feet and made it to go six-under. I had a soft drop on the eighth when I missed my par-putt on the high side. It was disappointing, but it didn’t rattle me.

“My form has not been great lately, but coming down the stretch, I made three really good par saves that gave me a lot of confidence. It’s nice to put together a good round again and I look forward to hopefully contending on the last day.”