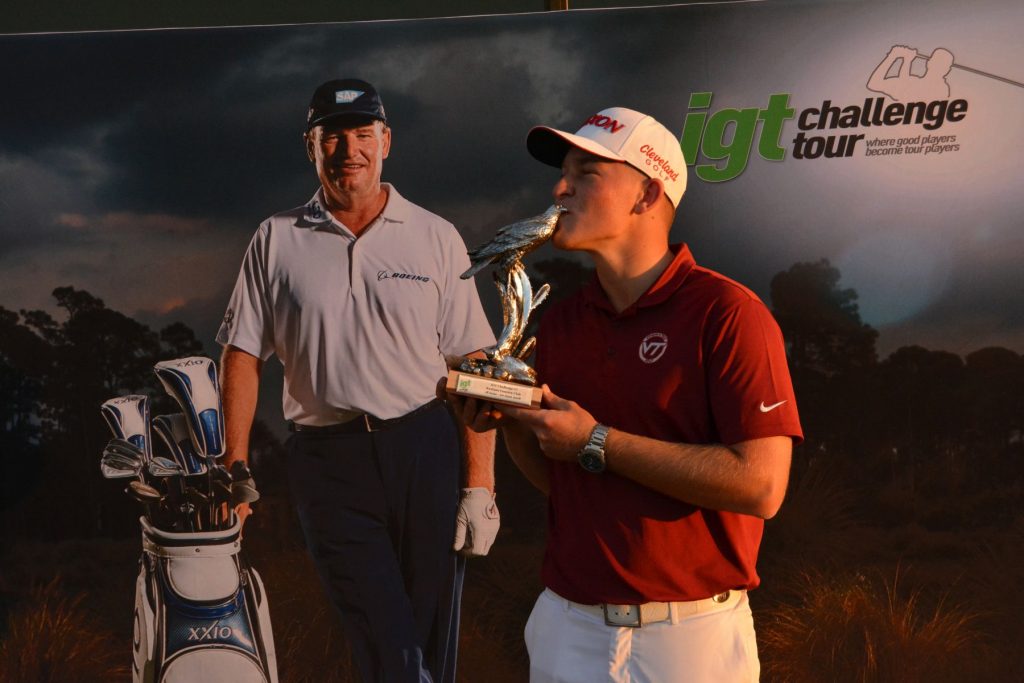 JOHANNESBURG, 20 June 2018 – Virginia Tech sophomore Slade Pickering glided to a maiden victory on the IGT Challenge Tour on the wings of a pair of eagles on Wednesday.
It proved to be a fascinating final round in the season’s seventh event at Kyalami Country Club.
Silver Lakes amateur Keegan Mclachlan appeared in control, but Pickering made his move with his first eagle at the par five ninth to draw level.
The 19-year-old overhauled the Ernie Els and Fancourt Foundation player with a stunning back nine and sank a decisive six-foot birdie putt on the last hole for a final round eight-under-par 64 to win by five strokes on 14 under.
Pickering and Mclachlan trailed overnight leader Muzi Nethunzwi by two shots at the start of the final round. The Soweto golfer ran into trouble with bogeys at three, six and seven, leaving the way clear for Mclachlan to take control after birdies at two and four.
Pickering made three pars to start before he collected his first birdie at the par five fourth.
“I had a bit of a nervy start,” said Pickering. “I told myself I needed to get something going when I got to the ninth tee. I split the fairway and had 240 metres left to the pin. The flag was in the front, so I wanted to hit a 4-iron short and use the slope to run it up onto the green. I hit the shot to perfection. The ball finished pin-high left and I boxed the 10-foot putt for eagle.”
Mclachlan made successive birdies at eight and nine to tie Pickering on nine-under.
Both players had birdies at 12, but Pickering pulled one shot clear with his third gain at 13. Mclachlan drew level with a birdie at 13, but the Pecanwood golfer was standing over another eagle putt.
“I hit perfect drive down the middle and my approach finished 15 foot from the hole,” he said.
“I made the putt to pull two shots clear. I hit my tee shot right into the trees at 15, and I had to start a 9-iron 20 feet left of the green with a huge cut. I hit it to 12 foot and holed the birdie putt, while Keegan made a double bogey.”
“I got a bit complacent with a five shot lead,” he said. “I lost focus at 17 and ended up two-putting for bogey. I made up for it with a good drive down 18. I laid up just short of the green with a 2-iron from 240 metres, chipped it to five foot and made the birdie putt.
“It’s a long summer break and I wanted to have some form when I head back to Virginia in the middle of August. So I started playing the IGT Challenge Tour at end of May to get competitive and I’ve had a lot of fun in the last three weeks.”
Pickering tied for 14th in his first start at Benoni Lake and tied for ninth in the Big Easy IGT Challenge at Randpark in early June.
“Things started to happen and I started getting more and more confident,” he said. “I got the putter going today and I only missed two greens, so the rest of the game clicked. I’m really pleased with the breakthrough and hopefully I can make it two before I head back to the United States.”
Mclachlan carded 69 to finish alone in second on 202, with Peetie van der Merwe a further stroke back after a final round 72. Keelan Africa, Cameron Moralee and Pretoria amateur Stals Swart rounded out the top five on six-under.
Nethunzwi, who closed with a 76 to tie for ninth on four-under, was philosophical about the final round. “I’ve been really pleased with the progress I’ve made, especially after the Gary Player School of 2018 Boot Camp, but that’s what it is: a work in progress,” he said. “I saw some things that need more attention in the final round, but to lead the field for two rounds was great because it’s a step in the right direction and that’s the positive I’m taking away from this week.”