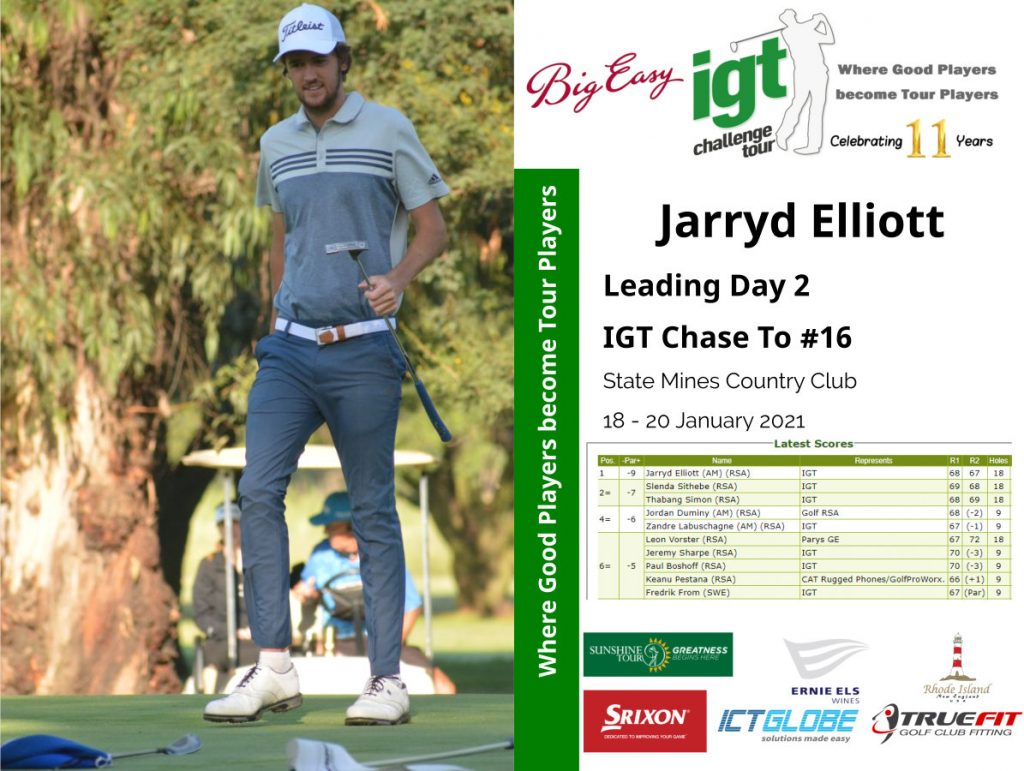 Elliott charges through in Brakpan

BRAKPAN, January 19 – Witbank amateur Jarryd Elliott carded a second-round five-under-par 67 to move to the top of the leaderboard at nine-under-par and two shots clear in the IGT Tour Chase To #16 at State Mines Country Club on Tuesday.

Along with Paul Boshoff who played himself into a share of the second spot, Elliott signed for the lowest score of the day and goes into the final round with some sort of breathing space between himself and the chasing group.

“Today I did the same as I did on day one,” said Elliott after his round on Tuesday. “I just made sure that I was always on the fairways and I could hit the greens from there. And today I just made a lot more putts than I did yesterday.”

He didn’t seem to struggle a lot with the putter on the front nine, though, because after the birdie he made on the first hole, two more followed on the third and fourth holes, and then the par-five seventh before Elliott dropped a shot just before the turn. He recovered swiftly after the drop, birdieing the 10th and the 13th before another unwanted bogey got onto his card on 16. He shrugged that off and made a brilliant birdie on the last hole for a round-two 67.

“I’ve just focussed on hitting the greens this week and staying positive when I don’t hit the greens,” Elliott said, “I haven’t focussed on getting birdies at all this week but I’m reading the greens well, So, tomorrow I’m going to focus on myself and make sure I have fun out there. Competition is tough out here but as my mom always says ‘go for par and the birdies will follow’. I’m looking forward to it.”

Elliott knows the caliber of the competitors in the field and knows the real test of character for him looms in the final round. The experienced Thabang Simon, Slenda Sithebe and Boshoff are lurking just two shots back. All three have an opportunity to ascend to the top and upset Elliott.

Trailing by three shots and in a share of the fifth spot on the leaderboard, exciting amateur Jordan Duminy, overnight leader Keanu Pestana and Sweden’s Frederik From will know that a three-shot deficit is not impossible to overturn and will be optimistic about their chances in the final round of the second IGT Tour event of the new year.