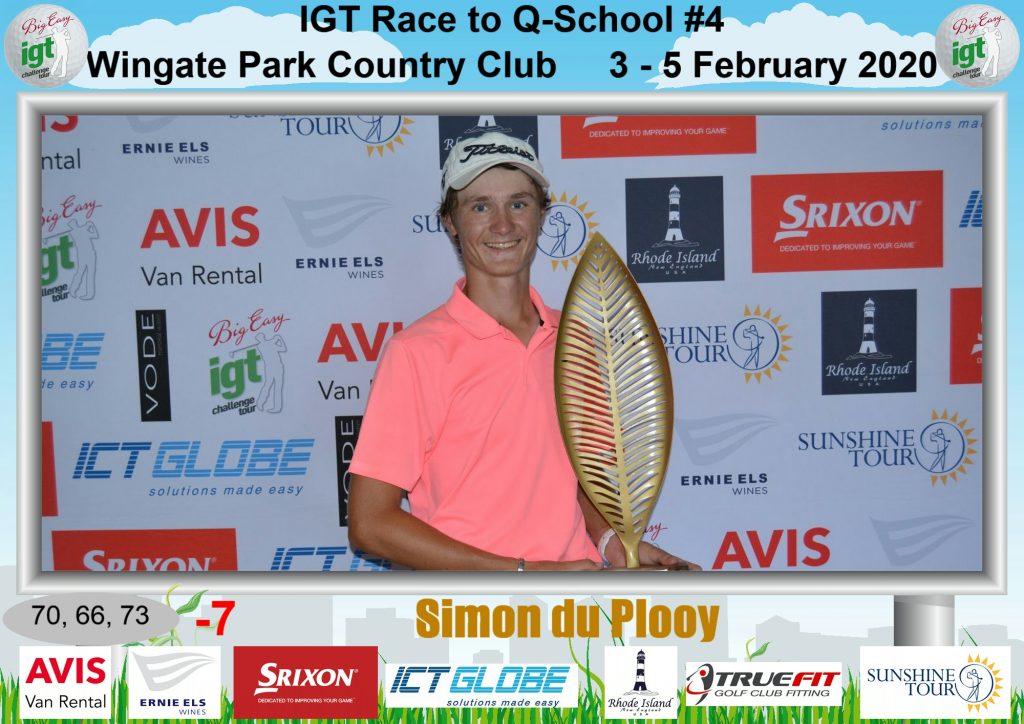 The 19-year-old holed several tricky putts for pars on the back nine in an enthralling battle with professional Quintin Wilsnach and fellow amateurs Brandon Gildenhuys and Zachary Chegwidden from England in the Race to Q-School #4 at Wingate Park Country Club.

The most important of all came at the 18th where, under the most intense of pressure, the teenager rolled it into the cup for a one-over 73 and victory on seven-under.

“I’ve never really featured on the amateur circuit and definitely not on the IGT Challenge Tour until now, so this is really big for me. It was a different Simon du Plooy out there today. I’m so pleased to have done this for my younger sister,” Du Plooy said.

Nadia du Plooy was diagnosed with Kearns Sayres Syndrome at a young age, a very rare neuromuscular and progressive disorder. She is only documented sufferer in South Africa.

“Nadia is a very positive person, but it’s not going so well at the moment. She’s been in a coma at The Wilgers for the last three weeks. My sister has always inspired me and she is a fighter. The prognosis is not promising, but I really hope I get the chance to tell her all about this day.”

The unheralded Du Plooy surged into the lead with a second round six-under-par 66 and carried a four-shot lead into the final day.

““I was very solid all week and even my third round I was comfortable, although I did drop some shots,” he said. “I got off to a par start that settled the nerves and on the second, I hit driver with a small draw and 7-iron from 181 metres out to 18 feet and drained the putt for eagle.”

The young gun dropped a shot on the par three eight and let two more slip on 12 and 13, but he kept his cool as the pressure mounted from the chasing pack.

“Quintin made a bunch of birdies and Brandon eagled the second and was also making a run. I just played the course and tried to shut out what they were doing. I made some very good par-putts over the last five holes to stay ahead.”

Wilsnach came up one shot short of Du Plooy’s target after closing with 67, while Gildenhuys eagled the 18th for 67 to match Wilsnach for the low round honours. The eagle finish netted the Southern Cape amateur a share of third on four-under to tie Chegwidden, who closed with a level-par 72.
“It’s fantastic to have my first win under the belt,” Du Plooy said.

“I’ve gained a lot of experience since I started campaigning on the IGT Challenge Tour and I hope to play the last two before the Sunshine Tour Q-School. I’ve jumped to third in the rankings and the top 15 at the end of the Race to Q-School Series will go straight to Final Stage.

“I’m starting my B.Com Accounting degree this year through UNISA and I’ll take less subjects so I can continue to play golf competitively. I’ve been discussing my career path with my coach Hendrik Buhrmann and my dad. We want the go through the experience of Q-School, but I if I’m successful, I will probably not take up a card. I think I will benefit from another year on the IGT Challenge Tour and hopefully also on the Big Easy IGT Challenge Tour. It’s been a brilliant week and I’m over the moon, because the conditions were tough. I just want to build on this now.”

Royal Johannesburg & Kensington’s Keaton Slatter cemented his position at number in the Race to Q-School Order of Merit with a top seven finish, while Jack Duthie from George rose to second with his top 12 performance. Du Plooy sits in third, while Pretoria pair Richard Kruger and Teagan Moore from Pretoria hold the fourth and fifth positions respectively.

With just two events remaining, the gents in the bubble – Michael Pfeifer in 15th and amateur Jancarel Rossouw in 16th – will both be looking for something special to happen to guarantee their spots in the Final Stage of Q-School at Houghton in March.