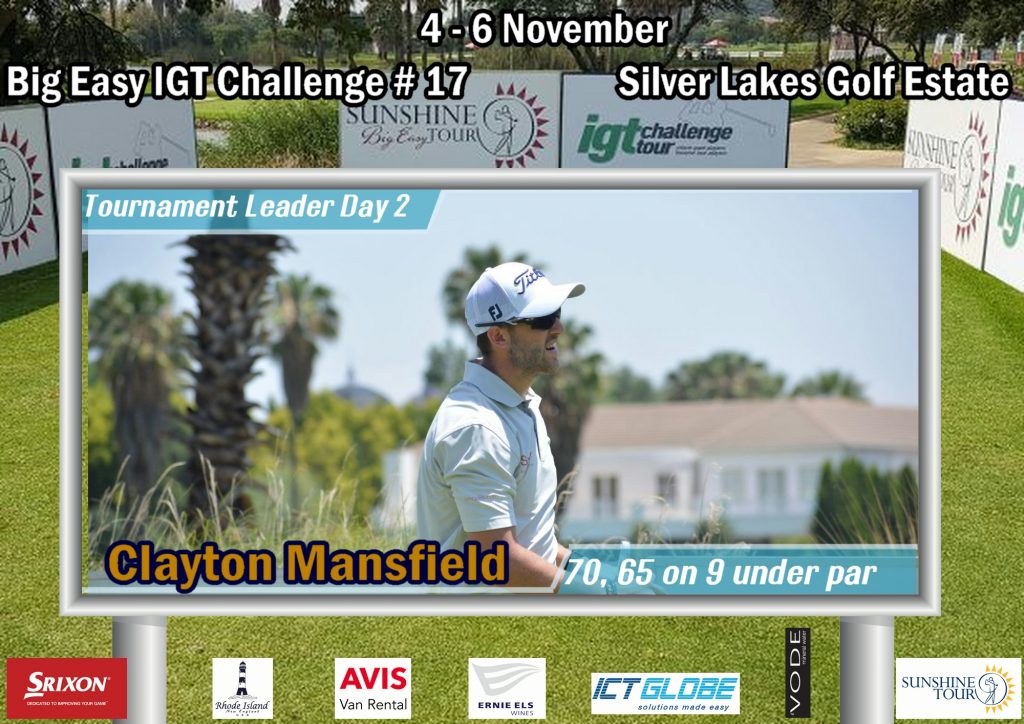 PRETORIA, 5 November 2019 – Clayton Mansfield from KwaZulu-Natal stormed into the lead on the second day of the Big Easy IGT Challenge Tour #17 with a bogey-free round of seven-under-par 65 at Silver Lakes Golf Estate.

The 25-year-old rookie showed off exceptional skills in the one and a half club wind to fire two eagles and a trio of birdies and move to nine-under. Mansfield will head into the final round with a three-shot cushion and a burning desire to land a maiden professional win.

“I was still an amateur when I won on the Chase to Sunshine Tour series on the IGT Challenge Tour in February and getting that first pro win under the belt has been a goal all season,” said the former GolfRSA National Squad member.

“I really played solid from tee to green and having two eagles on the card always helps, but going around this track bogey-free in the wind felt great. I started nicely with a four-foot birdie putt on 11 and on 14, I hit 4-iron to three feet and boxed for eagle. I hit a poor tee shot on the 18th and laid up, but almost holed the wedge shot and walked off with a birdie.

The solid ball striking round has given Mansfield plenty of confidence to take into the final round.

“It’s the business end of the season and the pressure is on. We only have two events left after this week and I’m still about R13 000 short of the top six of the Road to Sunshine Tour rankings. Only the top six will earn cards for the Sunshine Tour next season, so it has to happen soon,” said the Durban Country Club member.

“A win will boost me within striking distance of the top six, but I will need to push those thoughts right to the back of my mind. You can’t afford to lose focus in a final round, especially not at a course like this. A three-shot lead can be gone in a wink if you drop your guard here.”

Mansfield will be further tested by the five-way tie on six-under that features Basil Wright, Reinhardt Blaauw and the trio of Jason Smith, Jason Froneman and Jason Rossiter.

Smith, already a two-time winner this season, took fourth in the 16th event last week, Froneman fired a final round five-under-par 67 to claim a runner-up finish at Reading Country Club and Rossiter carded 68 in the final round to catapult to joint 17th.

Road to Sunshine Tour leader Matthew Spacey, Theunis Bezuidenhout and Mansfield’s travel partner Matt Saulez will start the final round four off the pace in joint seventh, while first round leader Tumelo Molloyi slumped to three-under after carding 75 in the second round.