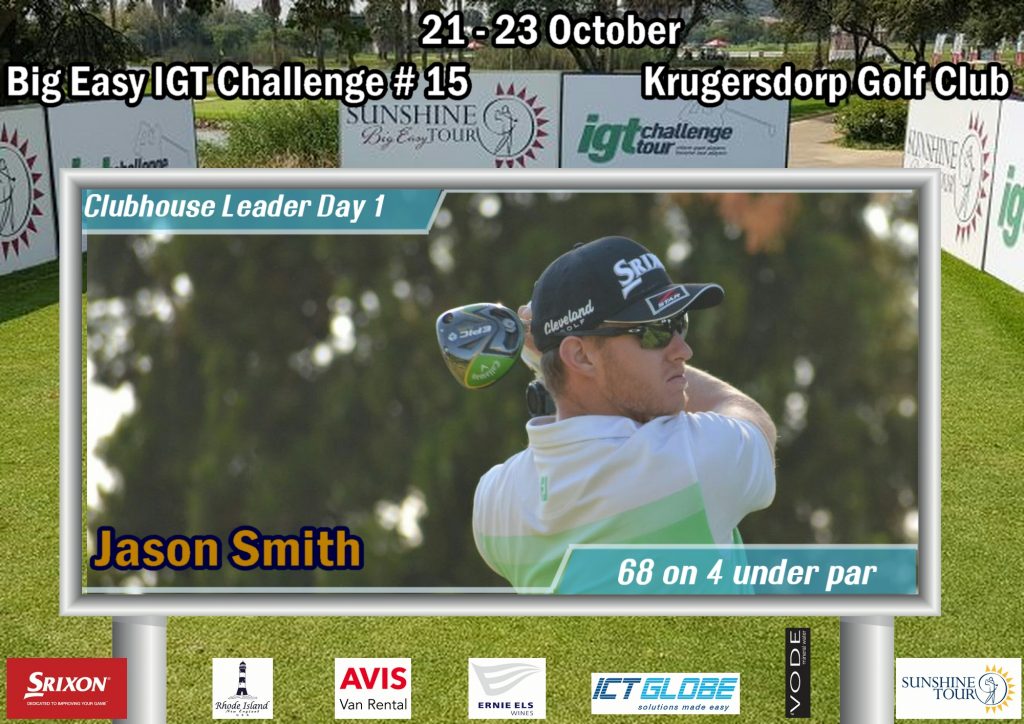 KRUGERSDORP, 21 October 2019 – Pretoria golfer Jason Smith carded an opening four-under-par 68 to take the lead on day one of the Big Easy IGT Challenge #15.

Smith has won twice this season – #5 at State Mines and #12 at Centurion – and a handful of top five finishes has kept the 25-year-old in the number two position on in the Road to Sunshine Tour rankings for eight weeks. The fast start at Krugersdorp Golf Club left the Irene golfer in a strong position to challenge for a hat-trick of titles that will go a long way to close the R14 000 gap on number one Malcolm Mitchell.

The par-72 layout was bathed in sunlight for the first day but the sunny conditions belied the severity of the 30-plus km per hour gusts, which posed a huge challenge for the field.

Smith burst from the blocks with a birdie-eagle combination on two par fives and a birdie at the third propelled him into the lead. He offset a pair of bogeys on the back nine to finish two shots clear of Zabastian de Jager.

“I bogeyed the last hole, which is never the way you want to finish, but otherwise I am happy with that round,” he said.

“It was very blustery, but you couldn’t trust the wind because it kept changing direction. You could throw up grass twice and get too different results, so it was tricky. I just played smart; hit a lot of good drives and good irons to the heart of the greens and grinded out a decent score.”

Smith had no expectations, having only played the Krugersdorp layout once before.

“I played a practice round with Spacey last week, so I didn’t know what a good score would be,” he said. “The first three holes played completely different to the practice round.

“I hit a good drive and decent approach to the middle of the green on the first and wo-putted for birdie and I sunk a long range putt on the second for eagle. My drive ran out quite long and I hit 7-iron into the wind on the right edge of the green. I wasn’t expecting to make that one.

“The third hole played downwind today, so I took my line down the left edge of the fairway. When I got down there, I was in the greenside bunker and I made a good up-and-down for birdie.”

Smith made amends for two soft bogeys coming home with a fighting birdie on the 16th and a tap-in gain on 17th.

“I misjudged the wind on 11 and again on 18 and hit the wrong clubs. On the last hole, my drive ran through the fairway and I couldn’t up-and-down to save par. It was disappointing and made the drive home a little longer, but really, I couldn’t have asked for a better start.”

De Jager, meanwhile, bookended a trio of birdies from the 11th hole with bogeys on 10 and 14. The Klerkdorp rookie birdied 17, one and two to join Smith on four-under, but surrendered his share of the lead with bogeys on four and nine.