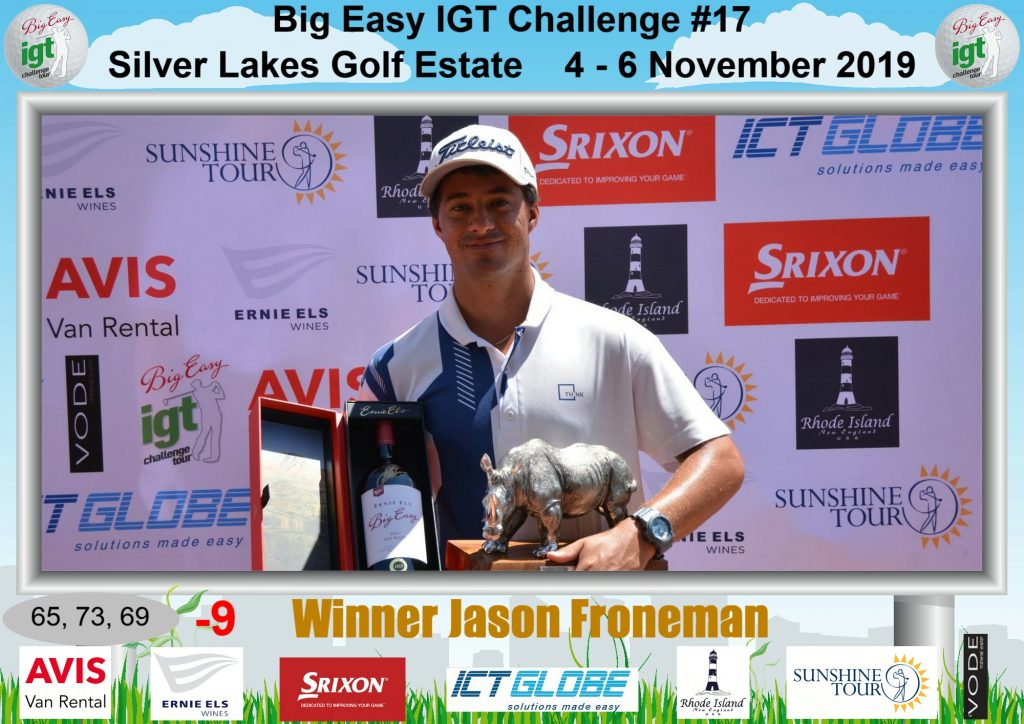 The 23-year-old burst into contention with a birdie the par five 15th and a lucky bounce on the par five 18th netted him the birdie he needed for a final round 69 to tie clubhouse leader Matthew Spacey on nine-under-par 207.

“It’s a great feeling to get my hands on a trophy,” said Froneman, who won at the first extra hole.

“I’ve been trending towards this win for the last couple of tournaments and after the tie for second last week at Reading, I felt I could win. I had a terrible front nine, but things went my way on the back nine and I played the last nine holes really well. I am psyched for the last two events after this.”

Froneman was three off the pace and Spacey a further stroke back with Clayton Mansfield leading the field on nine-under at the start of the final round, but the KwaZulu-Natal rookie got off to a bumpy start.

Spacey pounced with four birdies on the front nine to take pole position on nine-under and Froneman made an early move with birdies on two, four and seven, but he reach the turn level for the day after dropping shots on six, eight and nine. “I pulled my tee shot in the water on six, three-putted the eighth for bogey and couldn’t up and down from the greenside bunker on nine,” he said.

“It was a bit of a rough end to the loop, but I had a good chat with my caddie Brendan and we decided to start from scratch. I hit a really good second shot into 11 and holed a 10-footer for birdie and I was feeling good. From that point we just played shot for shot.”

Up ahead, Spacey struggled in the three-club wind and managed to offset bogeys on 13, 15 and 17 with a trio of birdies. Chasing a hat-trick of titles, the Dainfern golfer would end up rueing a short miss for birdie on the par five 18th and a final round 68.

Froneman, meanwhile, birdied the par five 14th to move within a shot of Spacey.

He made a great up and down on 16 to keep the momentum going.

“My birdie putt on 17 lipped out, but I knew I still had a par five to come to tie Matthew. I hit a good tee shot just a little bit left, but it was still in play and I had a good lie. I had 185 metres flag with the wind into us from the left and I decided to go for the green,” Froneman said.

“I pushed a 5-iron a bit and we saw it fly to the right of the green. Then it took a hop off the rocks and bounced left onto the green. The one bounce I had on the day went my way. I lagged it close and got myself in a play-off with a birdie.”

With the pressure on again, Froneman responded brilliantly in extra time.

“I was feeling great, but when I heard we were playing the ninth first, I got a bit nervous. I misjudged the wind in regulation play and bogeyed the hole, but we discussed it and I decided to go with a 9-iron this time and just hit it to the middle of the green,” he said.

“Matthew just missed the green on the right, so I committed to the shot and got on the green. Matthew chipped to about six foot and I lagged my downhill putt to a foot to force him to make par. When he missed, fortunately for me, I was really excited because I knew I wasn’t going to miss that putt.”

The victory propelled Froneman to eighth in the Road to Sunshine Tour rankings and he is within striking distance of regaining his Sunshine Tour card.

“It was a big disappointment when I lost my card earlier this year,” he said. “I tore a ligament in my knee and was out for eight months last year. The Sunshine Tour gave me a medical exemption, but I had six tournaments at the start of the season to try and keep my card.

“I came up short, but the Big Easy IGT Challenge Tour is a huge life-line. My coach Adrian van Pletzen at the World of Golf has worked with me to get my swing straighter and in the last couple of weeks it started to pay off.

“Today I got the result I wanted. I believe in my swing and in myself. Just need to keep this momentum going for two more weeks to get inside that top six to get one of the automatic Sunshine Tour cards for next season.”