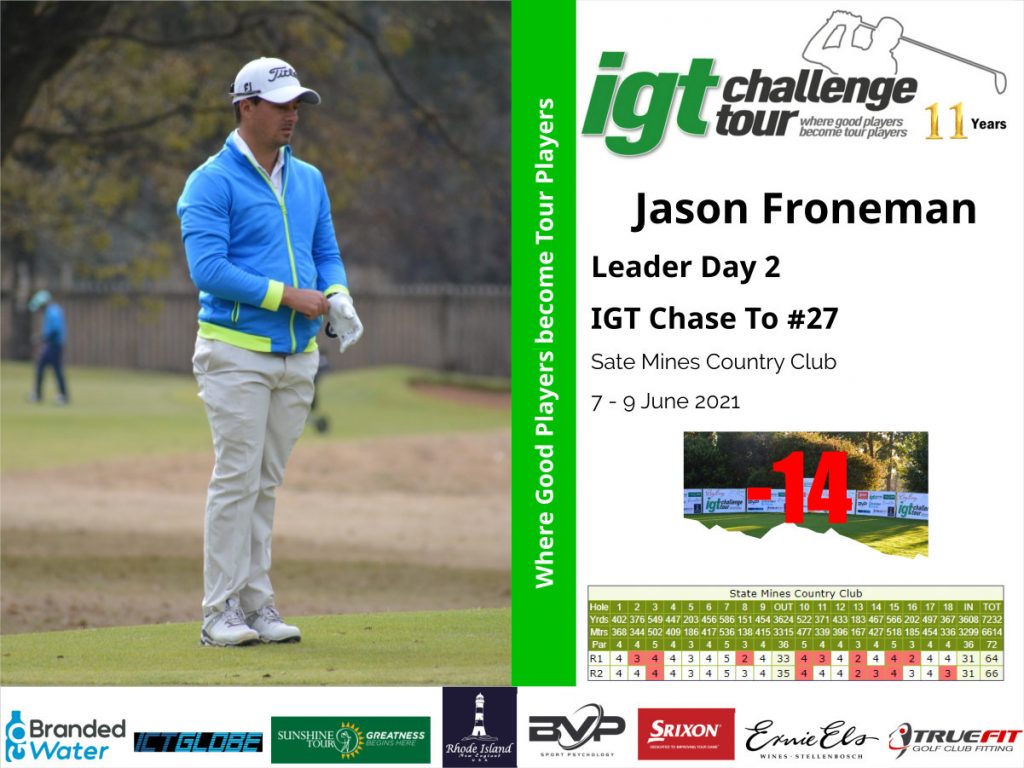 BRAKPAN, June 8 – Jason Froneman carded his second successive bogey-free round on Tuesday as he signed for a six-under-par 66 and a four-stroke lead after the second round of the Big Easy IGT Chase to the Sunshine Tour #27 at State Mines Golf Club.

He made five birdies on his opening nine after starting on the 10th, and then picked up one more on his way home as he took a four-stroke edge over local amateur Casey Jarvis and professionals Adriel Poonan and Rupert Kaminski. Jarvis carded a two-under 70, Poonan and four-under 68 and Kaminski handed in a six-under 66 of his own.

“Everything feels as if it’s coming together,” said Froneman. “My first nine was very satisfying. I was hitting it close, and I was making putts. It wasn’t quite as good on my second nine, but to keep any bogeys off my card feels very special.”

He got straight into things with a birdie on the 10th, and then he made three in succession from the 13th to the 15th. One more at the turn at 18, and then he picked up his sixth on the third. It was all pars from there, but it gives him that crucial edge going into the final round over Jarvis in particular.

State Mines is Jarvis’ home club, and, as he did with his opening 64, he can go low there. It wasn’t quite as easy for him in his second round, with two birdies and a bogey on the opening nine. It was more of the same on the homeward nine, but when a player knows the course as well as Jarvis does, it’s easy to ride a wave of good luck and good play and chase down a big lead.

Kaminski made two bogeys in his 66, and Poonan one in his 68. At 10-under, they are one shot clear of six players on nine-under, including pros Kyle McClatchie and Fredrik From of Sweden, both of whom are also capable of going low in the final round.

For Froneman, the knowledge that he is putting so well will serve him well as he attempts to ward off any challenges. “I’m rolling the ball really well,” he said, “and it feels as if I am putting better than I ever have.”

If you drive for show, and putt for dough, then Froneman is in a good place for the final round.