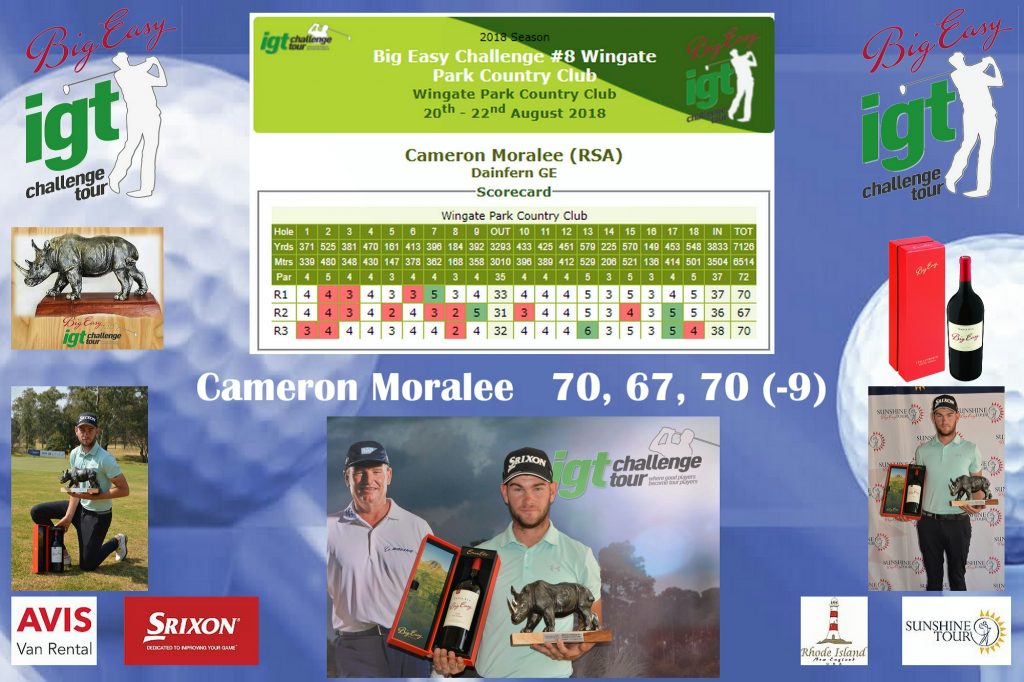 PRETORIA, 22 August 2018 – Dainfern rookie Cameron Moralee needs no further vindication for his decision to use the Big Easy IGT Challenge Tour to kick-start his professional career after a glorious breakthrough on the golf development circuit on Wednesday.
The champion revealed his motivation to join the pro ranks in April after he claimed a three-shot victory on nine-under-par 209 in the eighth event at Wingate Park Country Club.
“It’s all about learning how to win,” said Moralee, who boxed a 20-footer for birdie at last for a final round 70.
“Wherever you play, you’re going to have 10 or 11 guys you’re going to have to beat. You’re always trying to finish in the best position every week. I played the amateur circuit and I cut my teeth against the pros on the IGT Challenge Tour last year. Turning pro this year took me out of my comfort zone. It took my game to the next level. That’s how you do it. One level at a time.”
The former IGT Challenge Tour winner came back from a six-week lay-off two weeks ago and showed that his competitive desire was burning as bright as ever.
Moralee was composure and confidence personified as he started the final round one shot behind Sunshine Tour professional Francois Coetzee.
The 19-year-old got off to a birdie-birdie start while Coetzee sandwiched a pair of birdies between bogeys at one and four. Coetzee had further at six and eight, but bogeyed the seventh and Moralee took control of the tournament when he holed a trap-shot at the par three eighth.
The former SA Open Freddie Tait Trophy winner never surrendered the lead, not even when he gave shots back to the field at 13 and 17.
Coetzee blew his chances with a double bogey at 15 and a bogey finish for a 74. He tied for second with former IGT Challenge Tour winner Hendrikus Stoop, who closed with 71.
“It definitely wasn’t easy out there,” said Moralee. “We playing a two-club wind off all the back tips to tucked pins. You needed a lot of patience out there.
“I drove the ball well and the putter behaved. I blocked myself in the trees with both bogeys, but it didn’t dent my confidence. I just kept grinding.”
The win boosted Moralee to 11th in the Road to Sunshine Tour rankings and he is less than R100 outside the magic number.
“Top 10 at the end of the year takes you straight to the Sunshine Tour,” said Moralee. “I’m so close, I can taste it. It’s ironic, because I started to think I’m jinxed on this Tour.
“I tied for second in the first event and should have banked just over R7 000, but I never took out membership, so the first cheque didn’t count. I didn’t even finish the second event after I got hit by a golf ball in the neck. Then I got side-lined for six weeks with the pinched ligament in my shoulder.
“To be honest, I’ve been pretty grumpy the past couple of weeks. Monday morning before the first round I went to the Srixon van and Brendan Annandale gave me a great pep-talk. I owe him for this win, because I went out there with a positive mind-set.
“I am really happy to take this trophy home and show my parents and my coach, John Dickson, that putting up with grumpy old me for nearly two months was worth it.”