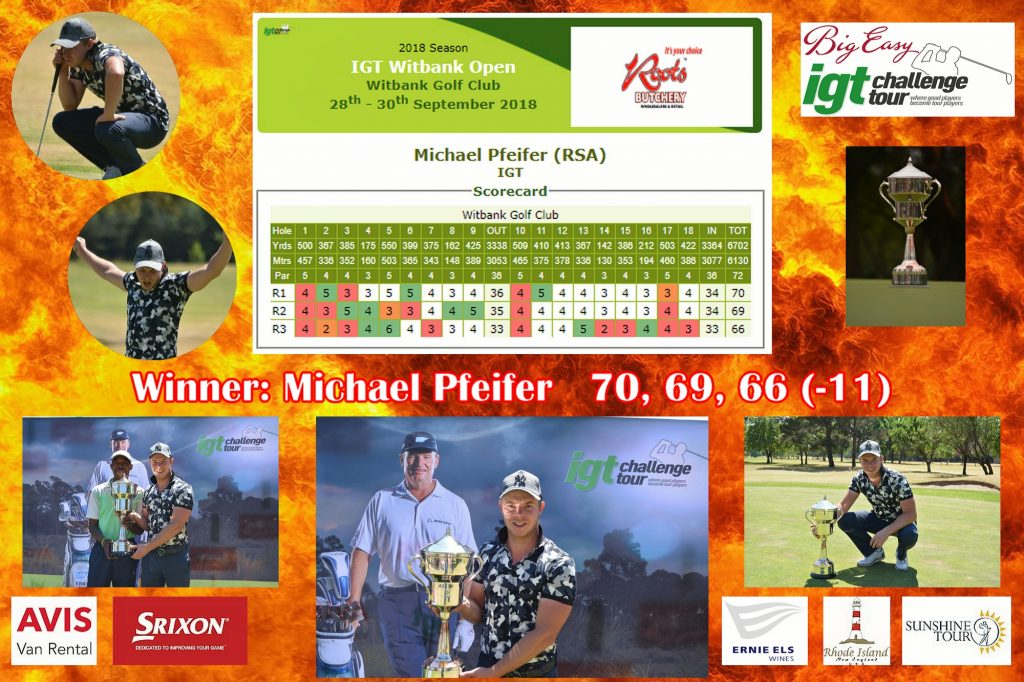 The German-born Pfeifer started the final round tied for the lead with four-time Sunshine Tour winner Brandon Pieters. The pair led by one shot from playing partner Inglis at Witbank Golf Club.

Pfeifer signalled his intentions when he took the lead with a birdie-eagle-birdie start, but he was pushed by Inglis down the last few holes. The pair drew level when the seasoned Sunshine Tour campaigner chipped in for a birdie at 16, however, Pfeifer sealed a two-shot victory when he birdied the last two holes for a six-under-par 66.

“I was playing well, especially tee to green, so I expected a lot of myself and to pull it off is amazing,” said Pfeifer, who posted a winning aggregate of 11-under 205.

“Jeff made a great run on the back nine and put me under a lot of pressure, but I managed to handle myself and made two crucial putts to win. I’m just so happy and relieved. My dad had some business in Johannesburg, so my parents made a weekend of it. It was very special to have both my parents standing behind the 18th green to see me win.”

Pfeifer kicked off the final round with a brilliant up-and-down for birdie after his tee shot landed him behind a palm tree.

“That settled me down, and I hit a great tee shot down the middle at the second,” he said. “I was slightly right in the fairway, 30 metres out, but I had a great angle and I chipped it in for eagle.

“At the third, I drove it down the middle. I had 50 metres flag to a front pin. I wanted to hit the ball with some spin, but it released. But I made the five metre putt to go into the lead.”

After soft drops at four and five, Pfeifer picked up a third shot at seven and he turned eight-under with a one shot lead over Inglis, while Pieters faded from the fight.

“Jeff and I both birdied 10 and parred the next two holes,” said Pfeifer. “I dropped a shot at 13, but I birdied 14 and 15 to go two shots clear. Then I hit it long and left at short hole and dropped another shot.

“Jeff hit a fantastic chip from the front of the green for birdie and we were level with two to play. The birdie at 17 was the game-changer. I had 178 metres flag after a good drive and I hit a solid 7-iron that pitched next to the flag. It kept on rolling and I had a five metre putt from the fringe.

“I made the putt and going down 18, I just tried to stay in the moment. I hit my tee shot slightly left behind a small tree, but I had a clear shot to the green and I hit a low 9-iron from 95 metres. It pitched nicely and I holed another five metre putt for the win.”

Pfeifer’s two shot victory earned him one of the biggest paydays of the season. He banked a cheque of R30 000 that vaulted him to third in the Money Leaders Order of Merit.

“Since I led in the opening round of the IGT Challenge #11 at State Mines in August, I’ve been trying to put myself in a position to win and it’s finally happened,” he said.

“It was great to play something different to the usual 54 holes of stroke play. I really enjoyed the chance of pace with the two Pro-Am rounds and my amateurs made it a lot of fun.

“It’s a relief to get the first win under the belt. I think my game is in a good shape and this win gives me a lot of confidence. Hopefully I can take this form to the winner’s circle soon on the Big Easy IGT Challenge Tour.”