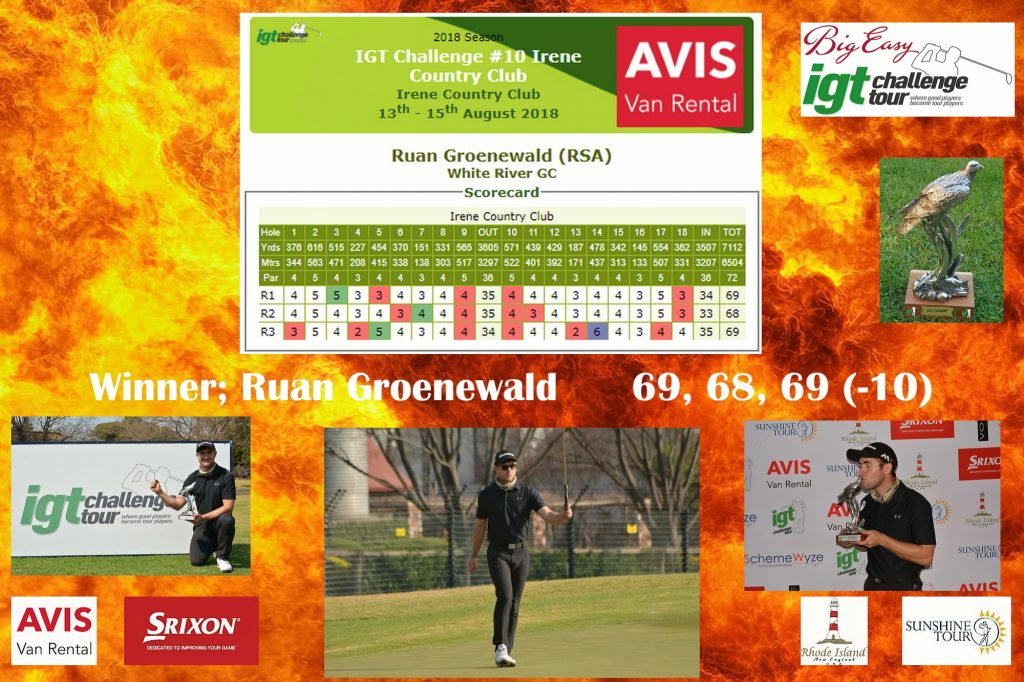 PRETORIA, 15 August 2018 – Ruan Groenewald from Nelspruit held off late charges from amateurs Aneurin Gounden and Gerhard Pepler to claim a maiden pro win in the IGT Challenge Tour #10 at Irene Country Club on Wednesday.
The White River golfer entered the final day a shot behind Pepler and fellow Mpumalanga rookie Peetie van der Merwe and showed real guts over the last three holes to sign for 69 and a one shot victory on 10-under 206.
Groenewald hit the front after he birdied both par fives around the turn and he moved three shots clear of the chasing pack with his fifth birdie at the par three 13th.
“I was 11-under and then disaster struck,” explained the 19-year-old. “I leaked my driver right and found my ball up against a tree. I had no shot, so I just did my best to get it back in the fairway. I had about 100 metres flag and hit a sand-wedge, but it came out too hot. I was right at the back of the green and I three-putted from about 50 feet.”
Gounden went on a hot streak, racking up a brace of birdies on 14 and 15 to get to eight under and Pepler was also two shots adrift after a bogey at 14.
“It was a scary moment, but I started seeing sport phycologist Maretha Claassen and the work we’ve done in just four sessions really paid off,” said Groenewald. “I was able to regroup really quickly and put myself back in a positive mind-frame. I just kept my head down and got on with it.”
Gounden, playing three groups ahead, birdied the par five 17th and the closing par four for a five-under 67 to set the clubhouse target at nine-under.
“I made a huge par-save at 16 from 45 foot that gave me a nice boost of confidence, but I nearly ran into trouble at the 17th. I drove it into the left hazard, but I found my ball and chipped out with a lob-wedge to get back in the fairway.
“I had 200 metres flag and I gave it everything with a 7-iron and hit it to give. After I holed the birdie putt, and Gerhard also made a birdie, I had a one shot lead. I was really calm playing the last hole, and just went for the safe shots. There was no reason to get fancy with one shot in hand.”
Groenewald split the fairway, hit sand-wedge in 106 metres and two-putted for the win.
The victory moved Groenewald to 12th on the IGT Money Leaders in only his sixth start. “It feel really great,” he said. “This first win I will remember for the rest of my life. It was a little bit stressful at the end, but my positive thoughts kept me in the fight and took me to the finish line.
“I am grateful to the Mpumalanga Golf Union and our president Graeme Morrison for giving me a great foundation and a lot of opportunities. Also my coach Edwin Compton, for his support. This first win is for my parents, for their love and for backing me every step of my golf career.
“When I made the move to the pro ranks three months ago, I felt ready to take my game to the next level but you tend to second guess yourself when things don’t go well. Maretha has helped me to put things into perspective. I kept a really good attitude going, even when things were going wrong, and played with confidence. I know now that I made the right decision for my career.”
Pepler’s birdie putt also found the bottom of the cup at 18.
He closed with a one-under 71 to tie for second with Ernie Els and Fancourt Foundation member Gounden, who started the day four shots off the lead. For both players, the joint runner-up finish marked a season-best result.