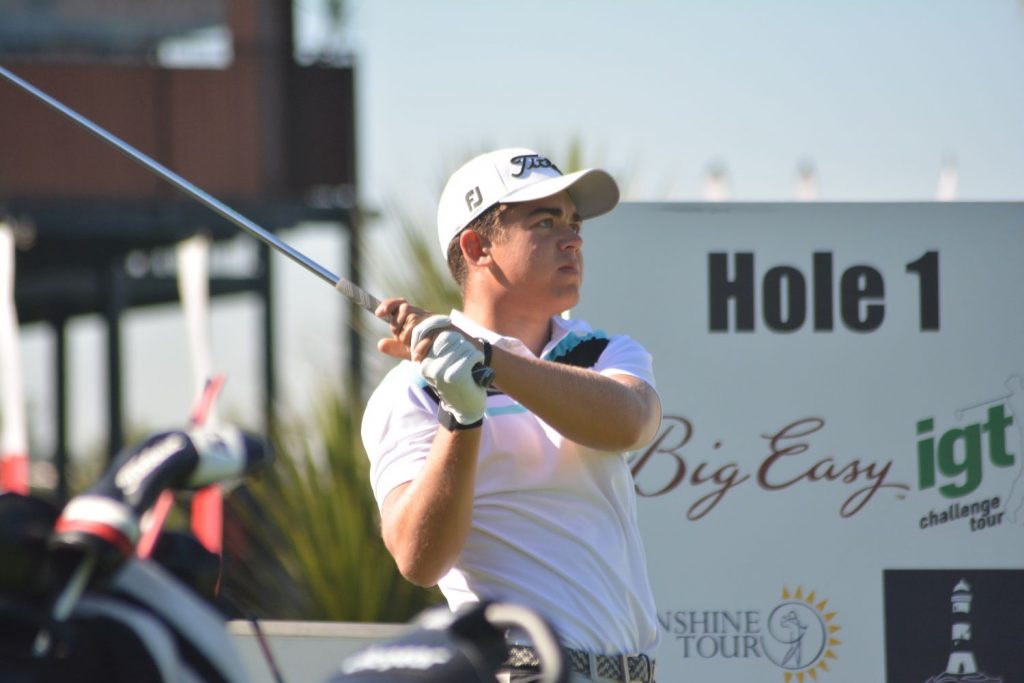 MODDERFONTEIN, 13 May 2019 – De Zalze lefty Garrick Higgo constructed a fine opening score of six-under-par 66 at Modderfontein Golf Club to take the first round lead in the Big Easy IGT Challenge Tour #3 on Monday.

Playing the course blind, the 20-year-old Sunshine Tour rookie put up six birdies and an eagle with some amazing short-game skills to lead a jam-packed leaderboard.

His closest challengers are Marthin Scheepers, whose five-under 67 featured a pair of eagles, and former IGT Challenge Tour winner Paul Boshoff, who racked up five birdies and an eagle for a share of second.

A further 18 players are within five shots off the leader, with 16 players tied for 22nd on level par.

Reigning Junior Open champion Martin Vorster made the most of his invitation to lead the amateur challenge.

But the day belonged to Higgo.

The former GolfRSA National Squad member packed it in after a year on the collegiate circuit in the United States. He competed on the GolfRSA Africa Swing earlier this year, before earning his Sunshine Tour card with a tie for fourth at Q-School.

“I’ve enjoyed wetting my feet in the pro ranks,” said the Boland lefty. “I came third in Zambia and made the cut in the Investec Royal Swazi Open, which was a really great event.

“I’m not into the Lombard Insurance Classic yet, so I decided to play this week’s Big Easy IGT to keep the form going. I also got a new driver and a 3-wood and I wanted to test them under pressure.

“But it was my birthday on Sunday and I didn’t fancy playing a practice round. Luckily the course treated me well. I played really solid from tee to green and putted quite well so it just sort of all came together.”

Higgo turned one-under and made a flying start on his homeward loop. He reeled in back-to-back birdies at the first and second holes, gained another shot at the par four fifth and finished the last two holes in style, eagle-birdie.

“I had two bogeys – at 17 and seven – but to be honest, I didn’t have a clue where to hit too on those holes, so I’ll take the punishment,” said Higgo.

“The course was like a big puzzle that I had to figure out. Sometimes that works to your advantage, because you don’t know where the ‘bad’ misses are. I hit it in the completely wrong spot on the first, but ended up with a pitching wedge into the par five and made a birdie. I’ll be hitting it there again intentionally tomorrow. The second hole is a dog-leg, and my tee-shot finished on the third holes’ green, but again, it was the perfect position for me.

“My short-game really worked hard for me. I had some clutch par-saves and nearly holed out for two at the fifth hole. I hit a good chip at seven, and nearly saved par, but again, didn’t have a clue where to go from the tee.

At the par five, I hit my drive into the trees. I hit a really great shot to 10 foot and holed the putt for eagle and at 18, I holed a 20-footer for birdie. It was a strong finish.”

Higgo would love to go wire-to-wire to get that first pro win under the belt.

“Every rookie wants that first win to prove to yourself that you can win. Whether it’s here this week or on the Sunshine Tour, I would love to get it done.”