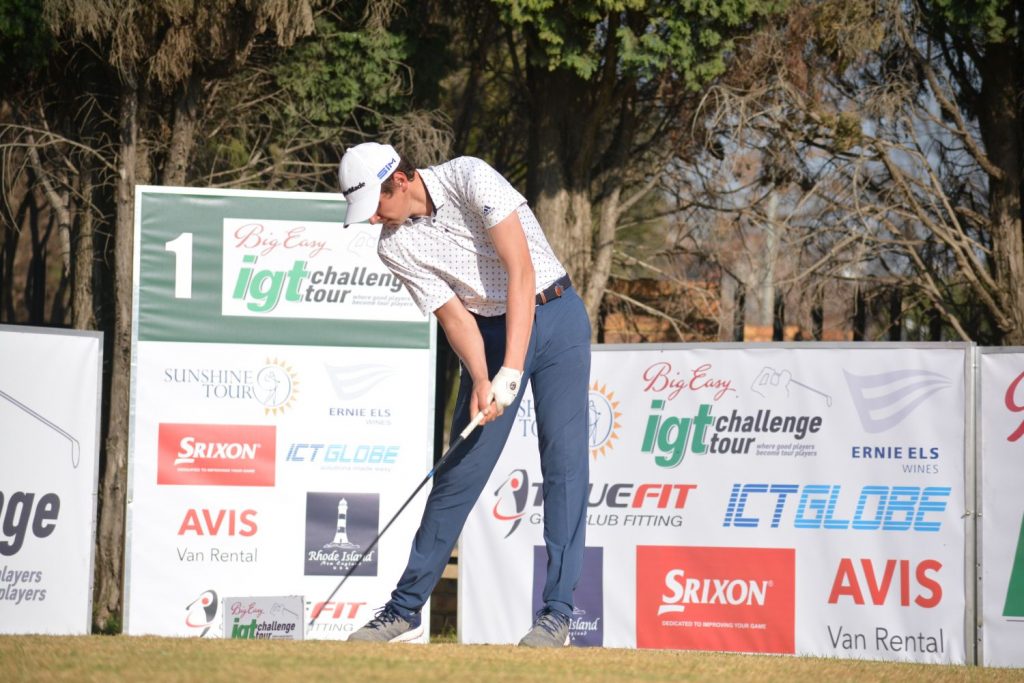 BRAKPAN, August 25 – The country’s number one amateur, Casey Jarvis, made two birdies in his last three holes to sign for a four-under-par 68 second round to see himself into a three-way share of the lead ahead of the final round of the IGT Tour Chase To #2 State Mines.

It was Big Easy Players Therion Nel with his round-two 67 and Brandon Gildenhuys with a near-perfect 66 and Jarvis who stole the show at Jarvis’ home course in Brakpan on day two, racing off to a one-shot lead ahead of the final round.

“The round was good, wasn’t the greatest,” said Jarvis, “I didn’t hit the ball too badly. In all fairness, I didn’t play too badly. I’m happy to shoot four-under, finishing with two birdies in the last three, I was extremely happy with that.”

Jarvis carved his name into the record books as the youngest winner in South African Stroke Play Championship history when he won the title in dominant fashion at Randpark Golf Club in February.

At 16 years old, Jarvis broke a record that had stood for 51 years when he won with a winning aggregate of 25-under-par 263 – a full nine strokes clear of his nearest competitor, Port Elizabeth’s Kyle de Beer.

The Boksburg teenager eclipsed the previous mark held by the legendary Dale Hayes, who won the first edition of the flagship event at 16 years and 8 months at Humewood Golf Club in 1969.

In January, Jarvis rose to No 1 in the GolfRSA Open Amateur rankings with back-to-back victories in the Free State and Gauteng North Opens. Now he aims to lift a Big Easy IGT Tour title at his home course.

“Playing State Mines is very familiar to me,” Jarvis said in a bullish manner, “I play here at least three times a week, so it’s pretty easy for me because I know the course well, I know the lines. That makes it a little easier for me.

Lurking dangerously and also with the advantage of course knowledge is multiple-club championship winner at State Mines Country Club, Vaughn Van Deventer who signed for a 69 to total eight-under for the week. He has proven himself to be an able competitor and the tussle for the summit will be an interesting affair on Wednesday.

Equally able and equally dangerous amateur, Yurav Premlall, lies fifth at six-under-par and with a three-shot deficit going into the final round.