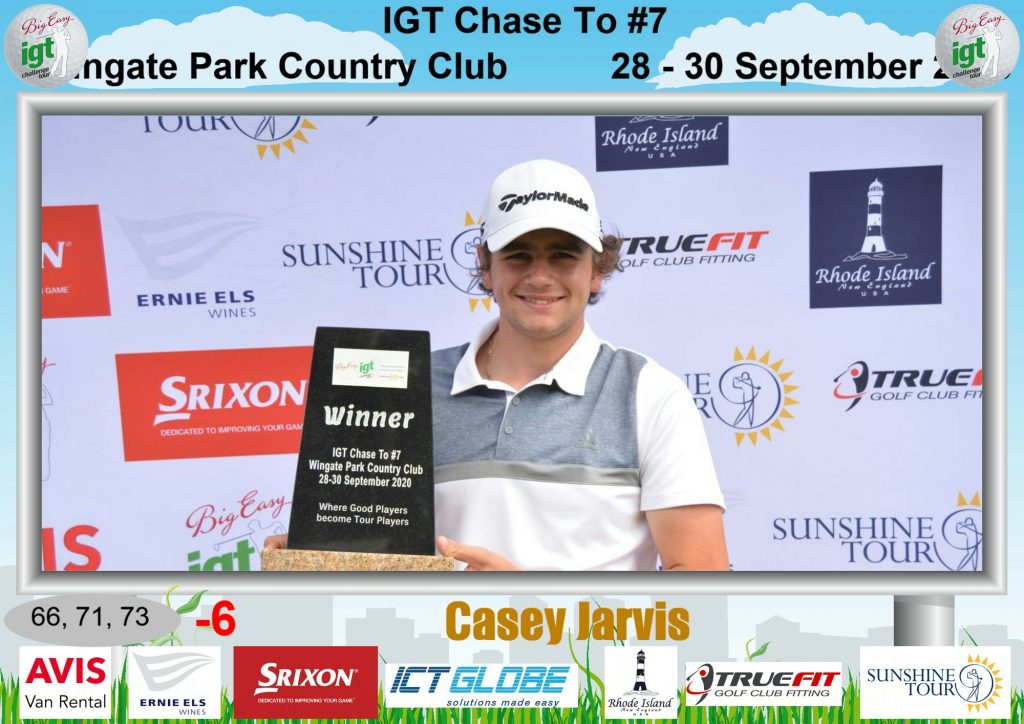 Jarvis grinds his way to a playoff win at Wingate Park

PRETORIA, September 30 – Casey Jarvis admits he didn’t play his best golf on Wednesday and had to grind hard to even play himself into a playoff where his par on the first hole of sudden-death was enough to earn him the IGT Chase #7 title over fellow Golf RSA amateur, Sam McKenzie.

A final-round score of 73 summed up a tough day for the South Africa’s leading amateur, but the experience he spoke about on Tuesday on the eve of his second IGT victory this season, showed and paid dividends when all seemed lost.

“I struggled with the putter today,” said Jarvis, who had been tournament leader from day one in Pretoria. “I struggled pretty much most of the day today until the 17th where I rolled in a good one to pretty much stay in contention down the last hole. And then, we (with McKenzie) birdied the last hole. I also made another five-footer there to get into the playoff.”

He started his round steadily enough, going par-birdie-par before the same fourth hole that had bitten him already this week, got the better of him and he bogeyed that hole. The par-three fifth was no better and he dropped there as well before making four straight pars to turn in 36.

A bogey at the turn was followed by another on the 12th and after steadily navigating through the next four holes safely and without dropping any more shots, Jarvis sprung up with back-to-back birdies to sign for a one-over 73 which brought his tournament score to six-under, and force a playoff at Wingate Park Country Club.

A wayward second shot by McKenzie on the first hole of sudden-death left him with some work to do and he couldn’t make the birdie, leaving Jarvis with an opportunity to claim his second victory this season.

“I just had to make par to win,” he said, “I had to play it safe and that’s what I did. I didn’t get too aggressive and I am happy I got the win.”

Having entered the final round of this IGT event leading by a slender but healthy two shots, Jarvis had it all to do in order to win here in Pretoria, especially with a very capable field piling up the pressure.

“It’s just experience. I’ve got a bit of experience leading in front and I enjoy it. I’m not going to feel much pressure,” said Jarvis ahead of the final round, and delivered exactly as promised.

His exploits on the IGT Tour alone and those of his fellow Golf RSA squad members have had some hail them as an example of development at work, a nod to Golf RSA and the golf development structures in the country at large.