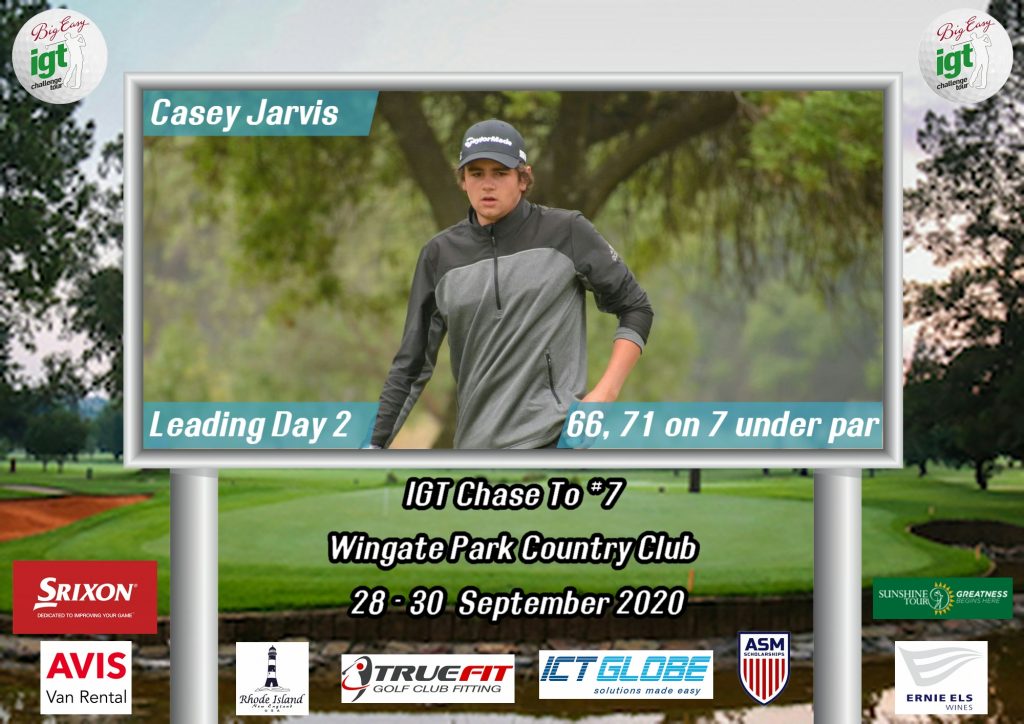 Jarvis maintains two-stroke lead ahead of final round at Wingate

PRETORIA, September 29 – South Africa’s leading amateur and Golf RSA Elite Squad member Casey Jarvis’ second-round one-under-par 1 in the IGT Chase #7 at Wingate Park Country Club helped him maintain his two-stroke lead at the top – a position he says he enjoys ahead of the final round.

One might mistakenly feel that there is a sense of being overly confident in the teenager’s tone but with a proven pedigree among his amateur peers in Golf RSA set-up and the professional ranks, Jarvis can walk the talk. His second-round score in Pretoria might have looked tough – as he seemed to have laboured to a 71 – but Jarvis isn’t entertaining any of that ahead of Wednesday’s outing.

He had an eventful second which started off with him making two pars a birdie in the first three holes, a good enough start. His progress was quickly derailed, however, as a bogey on the same fourth hole he referred to was followed by a double-bogey on the next hole, the par-three fifth.

“I played well today,” said Jarvis with assurance. “Yesterday I bogeyed the fourth hole; nothing difficult about those holes and it was just a few silly mistakes. Hitting it long on both holes and I ended up short-sighting myself. I birdied all the par-fives and hit solid shots in there; two-putted each of those holes, so I am pretty happy about how I played today.”

Jarvis already boasts a win in the IGT Chase, having claimed a one-stroke victory over Therion Nel at his home club at State Mines Country Club in the East Rand. He entered that tournament as co-leader and despite Nel’s efforts to try and force a playoff, Jarvis’ experience, even at his young age, held and victory was his.

The trio of Sam McKenzie, Angus Ellis-Cole and Leon Vorster share the second spot at five-under after 36 holes and will feel they have a shot. Meanwhile, Herman Loubser’s round-two three-under 69 helped him to the fifth spot at four-under for the tournament.