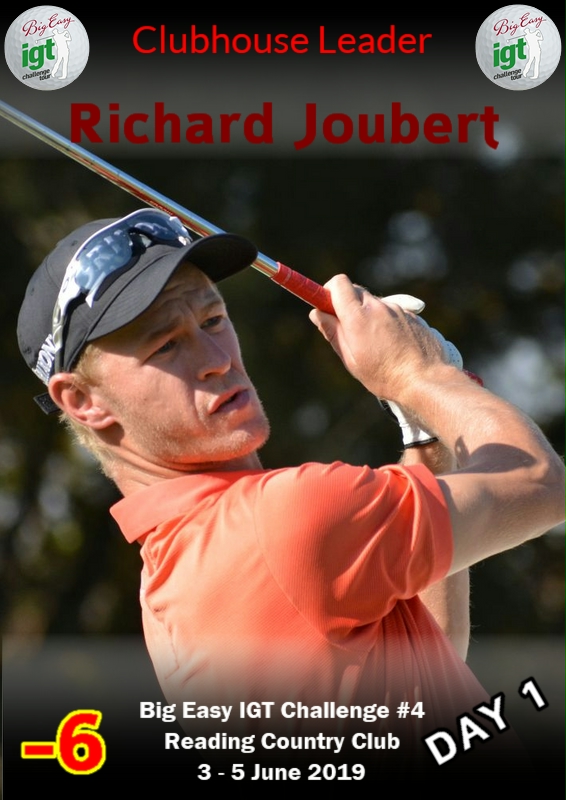 ALBERTON, (3 June 2019) – Richard Joubert scorched his way around Reading Country Club in six-under 65 to forge a one-shot lead in the first round of the Big Easy IGT Challenge Tour #4 on Monday.

The Waterkloof golfer leads the duo of Erhard Lambrechts and Jason Smith, who both carded 66s on the tree-line parkland layout.

Rookie Hans-Jurie Human got himself into the mix with a four-under 67. The Southern Cape golfer grabbed a share of fourth with the experienced trio of Marthin Scheepers, Albert Venter, and Gideon van der Vyver.

Joubert began on the 10th hole, and soon found his stride with a birdie at the short par five 12th, before making three in a row from the tricky par three 15th.

His only blemish on the outward loop came at the straightforward par four 18th.

Making the turn, he navigated the tight first hole before reeling off four birdies on the bounce from the second before a bogey on six and three pars to close out his round.

“I hit it really close to the green on two and hit a good chip,” Joubert said. “On three, I got lucky with my drive and just missed the hazard. I knocked it to six feet. On the par five (fourth) I snapped my drive into the trees, played short and made a great up-and-down for birdie.

“Then on the par three fifth I hit it pretty close and made the putt. The course has a lot of birdies so I hope I can get it going again tomorrow. I played here on the IGT race to Q-School and I really like the course. I finished four-under before, so I’m very excited for the rest of this event.

“I hit two snap hooks off the tee today, but besides that it was good. I didn’t do anything badly; the putter was just working well. I changed putters two weeks ago and it’s coming on nicely right now. I changed from the Old Odyssey to the Spider Tour. This is my first event and it’s behaving so far. I hit 16 greens today, so if I can keep that up I’ll do well.”

The Pretoria native has been working on his game for much of the year, and his results have slowly begun to reflect his high work ethic.

“I’ve been improving all areas of my game this year, but it’s a slow process,” he said. “It showed in the IGT Race to Q-School series when I won one of the events. The game has been feeling pretty good. In nine events, I’m 42-under, so I’m happy with the progress.”

Joubert admits that shooting 78 in the first round of the Sunshine Tour Qualifying School Final Stage got to him. “My game was there, and then I shot a first round 78 and missed by a few. That got me down a bit,” he said.

Without full playing privileges on the Big Easy IGT Challenge Tour, the equation is simple for Joubert – win and all the doors begin to burst open.

“I don’t have a Big Easy card yet, so I have to play a lot of IGTs to make the field. The goals are to win on the IGT, to play as many Big Easy IGT’s as possible and finish in the top-six of the Big Easy IGT to guarantee my card for the next year.

“I’ve been unlucky at the last two Q-Schools at Randpark, but you learn from that. It’s how you grow and improve. The Big Easy IGT gives us a great foundation. Its competitive golf with a lot of good golfers.”