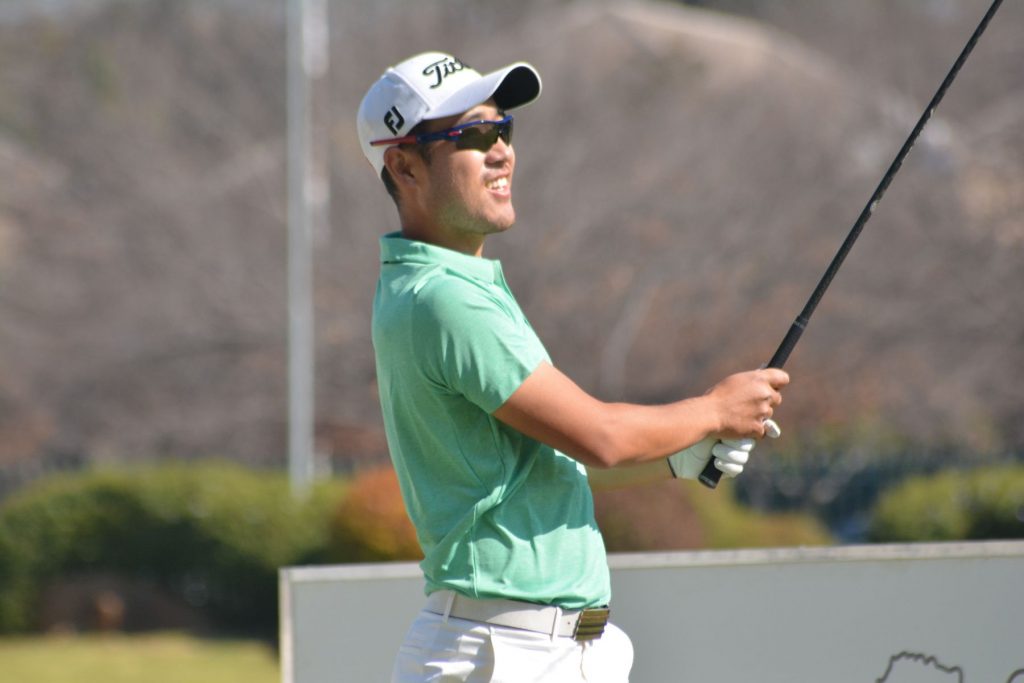 ALBERTON, 24 July 2018 – DK Kim from Korea will go in pursuit of his second IGT Challenge Tour title on Wednesday after sharing the low round honour on day two with Belgium golfer Gary Daoust in Alberton.
The international pair both navigated the par-72 layout at Reading Country Club in 65 strokes to push clear of the field.
A birdie-laden front nine put Kim in pole position around the turn and two more gains on the back took his score to 10-under-par for the tournament. Daoust ran up five birdies on the back nine, but finished two shots shy of his Wanna Be A Champion stable-mate.
Gillson Filho from Argentina carded 69 and Allister de Kock posted 68 to tie for third on four-under, with fellow Gary Player School of 2018/2018 member Derick Peterson a further stroke adrift after returning a two-under 70.
Overnight leader Jaco van der Merwe cancelled a trio of bogeys on the front nine with an eagle and two birdies, but the Pretoria amateur couldn’t recover from a double bogey at 10. He signed for 74 after two further drops at 14 and 18 and will start the final round eight off the pace.
Kim won his maiden title in 2013, but has had to make two return trips to Q-School since graduating the country’s premier golf development circuit four years ago.
“Last year was a better season, but the good results came too late,” said Kim. “I missed the top 30 cut-off at Q-School by just one stroke this year and that hurt. I have a chance to get back on the Sunshine Tour if I can finish in the top 10 on the Big Easy IGT Challenge Tour. Right now I’m lying fifth in the Road to Sunshine Tour, so I’m staying on course to make it.”
The Randpark golfer has been trending towards victory and came into the eighth event at Reading after a runner-up and a tie for fifth late on the Big Easy IGT Challenge Tour in June.
“I found the first season on the Sunshine Tour really tough,” said Kim. “I wasn’t ready mentally for the challenges. It’s a big leap. Last year I learned a lot and started producing good results towards the end of the season.
“Mentally, I have a stronger game and my course management has really improved. When you start seeing the positive results, you build confidence. It’s great that we can keep competitive on the IGT Challenge Tour between Big Easy events, because you keep building self-belief.”
Kim’s second round started the same as his opening round: with a three-putt bogey at the first.
The 28-year-old overturned the deficit with a birdie at the par four second and he racked up further birdies at four, six, eight and nine to turn eight under.
“My birdies on the back came at 11 and 15,” Kim said.
“They moved the tees forward, so it was playing much shorter than in the first round. It was playing downwind and I didn’t have a club, so I went with a knuckle-down 9-iron. I hit it over the green, but I chipped it in for two.
“My other three-putt of the day came at the par five (12). The 15th hole was very tricky, because the wind was left to right and the flag was tucked left. I went with the safe option and hit it to the right side, leaving myself a 10 metre putt and I holed it.
“I have been putting well and I’ve taken chances when they came, so I’ll play the final round in the same way. Hit it where I can see the ball, attack the flag when I’m sure and keep it safe as I have done when I’m not. Hopefully the strategy pays off with another trophy.”