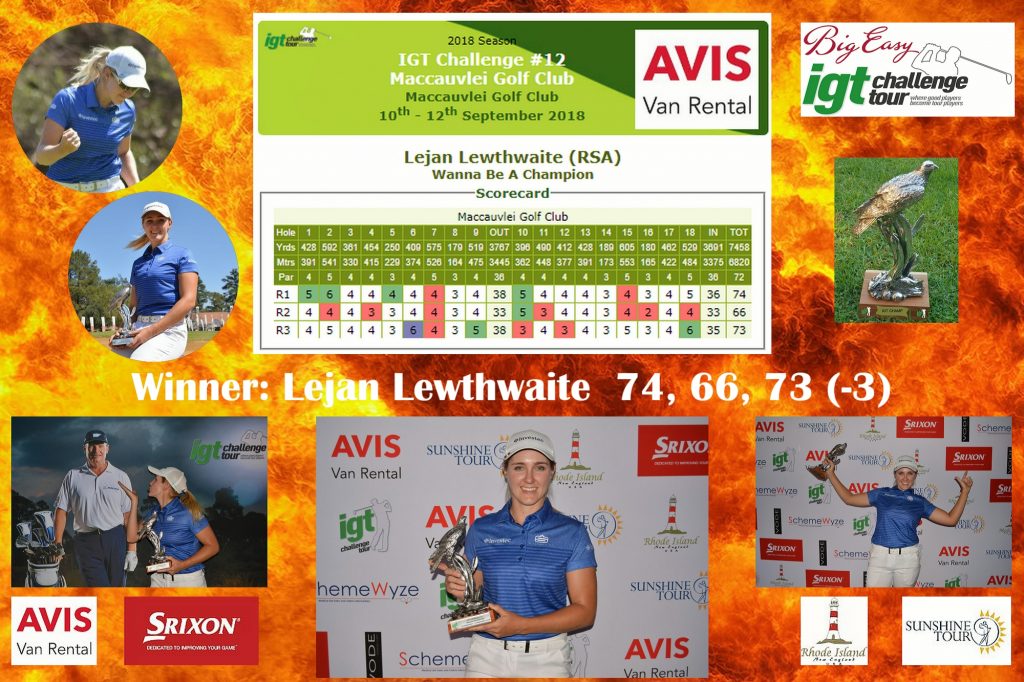 VEREENIGING, 12 September 2018 – Women golfers have played the top men’s pro circuits around the world since Babe Zaharias’ debut on the PGA Tour in 1938. Dame Laura Davies did it. Annika Sorenstam did it. Michelle Wie and Brittany Lincicome did it. Even SA Women’s Open champion Ashleigh Buhai played in a Tour Championship on the Sunshine Tour.

But no woman ever beat the men at their own game until Lejan Lewthwaite from Benoni wrote her name in the South African golfing annals with a maiden win on the IGT Challenge Tour on Wednesday.

The Benoni golfer broke ground for local sportswomen when she won the IGT Challenge #12 in a play-off at Maccauvlei Golf Club and became the first female champion of South Africa’s premier golf development circuit.

“I lost out twice in 2016, but this time, I believed I could win,” said the 27-year-old from Farramere. “It was really close, but I never doubted myself.

“It great to be the first woman champion and to finally have a win under my belt. More than anything, I conquered my demons. I always threw it away because I got to quick down the stretch. When we went into a sudden-death play-off, I calmed myself down. Doing that kept me focussed, gave me the win. That, and some damn good golf.”

“I knew it would be a battle,” Lewthwaite said. “Garth came into this week on the back of his maiden win in the IGT Challenge Tour #11 at State Mines last week. And it’s his home course.”

Ironically, Wolter faltered first, splitting bogeys at the first and third with a birdie at the second, but Lewthwaite ran into her own share of trouble with a double bogey at six.

She birdied seven but another drop at nine saw Wolter lead by one shot through the turn.

“I got a bit too aggressive with my tee shot at six and I finished under the trees,” said Lewthwaite. “I hit my second into the trap, teethed it out and three-putted. At nine, I hit a good tee shot and had 179 metres flag, the perfect distance for a 4-hybrid.

“It pitched on the front, caught a big bounce ran right through to the back of the green. I pushed a tricky downhill putt eight feet past, misread the line on the return and three-putted for bogey.”

The duo tied on three-under 213 in regulation play with rounds of 73.

“I played 18 the same way I did the first two rounds…driver off the tee, 3-wood into the green, but I caught my second fat, and found the front bunker,” said Lewthwaite.

“I could feel the sand was really hard under foot. I committed to the shot, but it went straight over the pin. I lagged it to nine foot, but my par putt just skimmed the hole.”

Lewthwaite produced a grand stand finish in the play-off, though.

“I shut everything out and just focussed on my processes,” she said. “We both hit solid drives. His second flew the green and I hit my approach with a low trajectory. It landed eight metres into the green and rolled up to 15 feet. He chipped it close, but I looked at the dot on my ball, put a good stroke on the putt and nailed it. I knew as soon as I hit it that it was good.

“I’m so happy with this result. I’m going to the Ladies European Tour Q-School in December and I’ve done a lot of work on my short game with Robbie Stewart. I’ve only been working with Mark Fairbank, a sport psychologist with The Golf School of Excellence, for a short while, but his advice has been solid.

“This win is proof positive that I’m doing the right things. I hope this will inspire amateurs and young pros to follow my lead and to use the IGT Challenge Tour to gain experience before they head to Europe or the USA.”