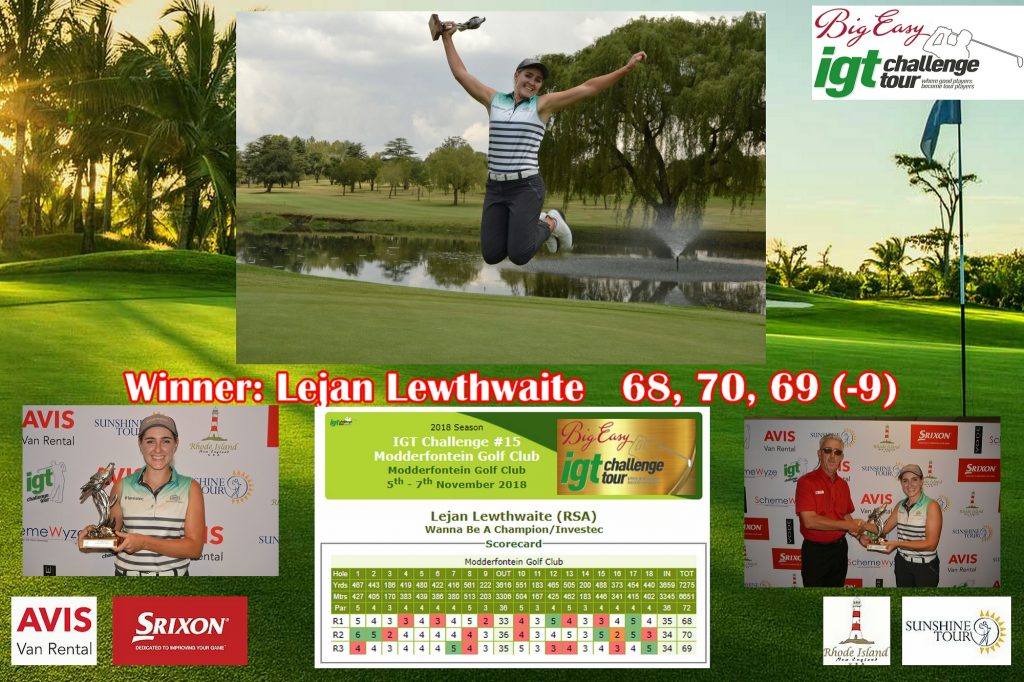 MODDERFONTEIN, 7 November 2018 – Benoni golfer Lejan Lewthwaite claimed her second play-off victory on the IGT Challenge Tour, this time defeating Tristen Strydom at the second extra hole at Modderfontein Golf Club on Wednesday.
Strydom held the lead for 51 holes, but a couple of bogeys down the stretch saw the Pretoria golfer close with 71. Lewthwaite took pole position at 16, but a bogey finish for a 69 saw the pair tie on nine-under-par 209 in regulation play.
When Lewthwaite made IGT Challenge Tour history as the first female winner just over two months ago, she won at the first hole of a sudden-death play-off at Maccauvlei. This time she got the job done in two holes.
“I’m so incredibly happy with the result,” said the 27-year-old Investec player. “The timing is just perfect with the Final Stage of the Ladies European Tour Qualifying School in three weeks.
“The Champions League at Wanderers sponsored me to compete in the Hero Women’s Indian Open last month and I came back with quite a bit of confidence after I made the cut at the DLF Golf and Country Club, which is considered one of the toughest courses in the world.
“The course set-up was similar to the Joburg Ladies Open set-up with a mix of men’s, senior and the back tips of the ladies tees. I made a good start in the first round, kept it going and know I had a chance if I stayed patient.”
Lewthwaite opened with rounds of 68 and 70 to start final day two shots behind four-time winner Strydom. The overnight leader bombed his drive down the first, was on the green for two and made an eagle start. He birdied eight to turn 11-under.
Lewthwaite made a birdie start and cancelled a bogey at seven with a birdie the next hole to start the back nine four off the pace.
“I holed two long birdie putts at 12 and 13 to get within two shots and when Tristen bogeyed 15 the gap was down to one,” said Lewthwaite. “The 14th and 15th holes are two really tough holes, and I was really pleased to make par on both.
“He had some tree trouble at 16 and dropped another shot and I boxed a clutch-putt for birdie to take the lead at 16. At 18, my tee shot ran through the fairway and finished up against the trunk of a tree. I had no other option than to punch out and I finished with a bogey.
“We both parred 18 the first time round. My second drive was shorter and I had to take an extra club and hit 8-iron on the green. Tristen’s approached plugged in the greenside bunker and he didn’t get it out the first time, which left me with two putts for the win.
“It was a tense day, but I stayed patient. That’s something I’ve been working on with my mental coach, Mark Fairbanks, because my impatience has cost me in the past. So this was a mental victory for me, too.
“I’m really grateful for Investec, Skechers SA and Swagg Clothing for their ongoing sponsorship and support and Robbie Stewart, who has really given me a lot of confidence with my short-game. And to Cois (du Plooy, IGT Challenge Tour commissioner), who lets us compete on the IGT Challenge Tour.
“It really helps us to build our games and stay competitive and I think competing against the guys gives us an added edge. Just look at Nobby (Nobuhle Dlamini). She’s been prepping here for the First Stage of Q-School, which she won last week.”
And Lewthwaite wasn’t the only Sunshine Ladies Tour campaigner to shine this week.
Three more ladies made the cut. Francesca Cuturi tied for 23rd, Ivanna Samu grabbed a share of 30th and Pretoria rookie Catherine Lau tied for 32nd in just her second start in the pro ranks.