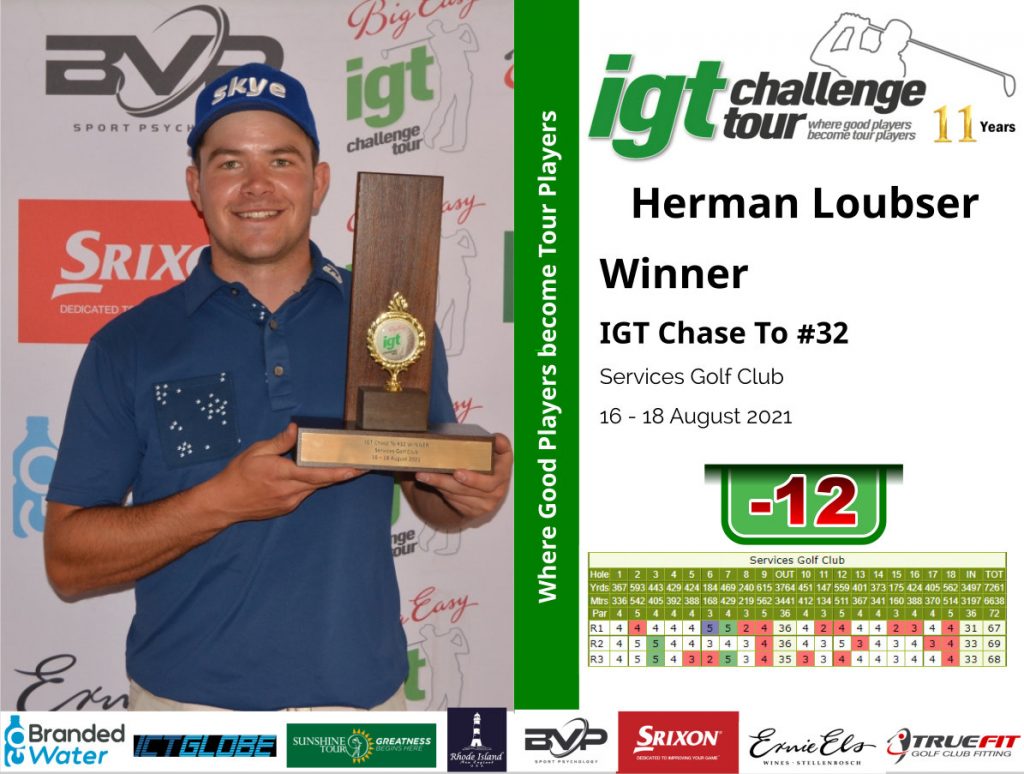 Loubser holds off strong challenge to win at Services

Herman Loubser held off a determined challenge on Wednesday to take a two-shot victory in the Big Easy IGT Challenge Tour’s Chase to the Sunshine Tour #32 at Services Golf Club for his second title of the season.

With four holes to play, Leon Vorster, with whom Loubser had shared the 36-hole lead, had drawn level with Loubser again after a run of three successive birdies had put the pair on 11-under-par for the tournament.

But two dropped shots in a row on 15 and 16 put a brake on the challenge Vorster was bringing, and Loubser was able to coast home, even though an eagle on 18 from Vorster might have added some pressure to the situation. Vorster didn’t make the 30-footer for eagle, two-putting for birdie instead. Loubser responded with a birdie of his own after missing a 10-footer for eagle on the closing hole, and the two-shot margin was maintained.

“It got a bit tight,” conceded Loubser as he looked back on the homeward nine. “I actually missed a shirt birdie putt on 11 when he made bogey, and that could have taken quite a bit of pressure off me.

“But the reality is Leon played really, really well, and when he made those three birdies in a row, I certainly was getting a bit tense. Then he hit his tee shot in the bunker on the par-three 15th, and couldn’t get up and down for par, and the wind had no affect on his approach to 16 and he hit it over the back of the green to make bogey there.

“That helped me to make par all the way in, and, even though he was full of eagles yesterday, I was pretty comfortable when he hit his approach to 30 feet on the par-five 18th, and I hit mine to 10. If that has been reversed, then I would have felt a little less comfortable.”

“I’ve done a lot of work on my swing,” said Loubser, “and, frankly, I just wanted to feel I was playing well under pressure today. The win was a lovely bonus.”