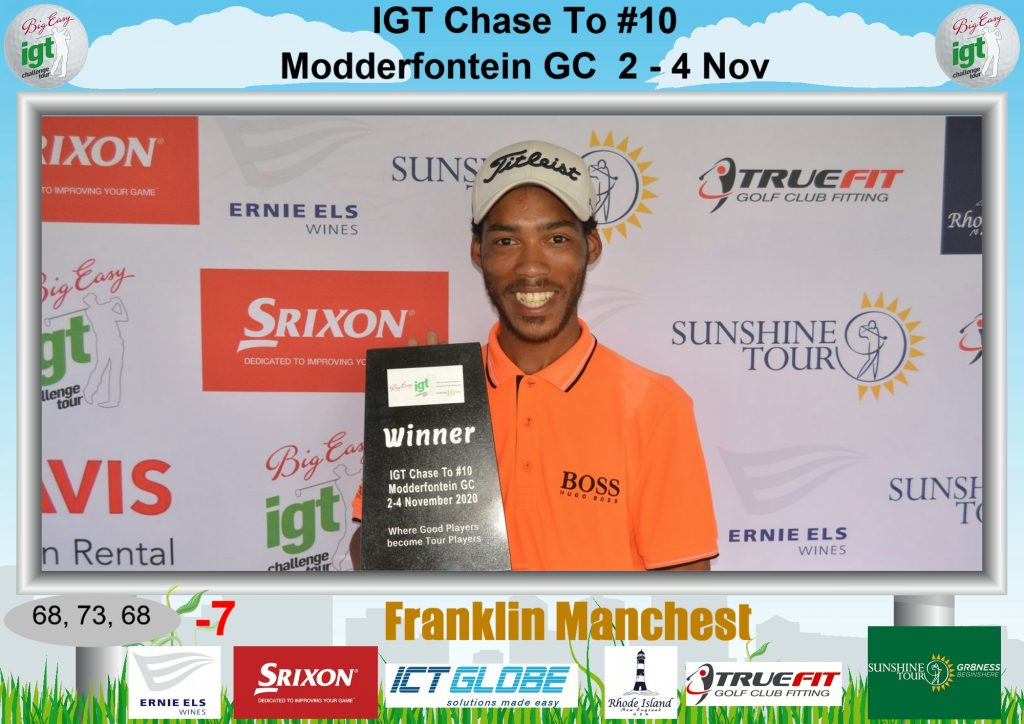 MODDERFONTEIN, November 4 – Franklin Manchest says mental strength and a mindset change had a lot to do with his playoff win in the Big Easy IGT Tour Chase To #10 at Modderfontein Golf Club for his maiden professional victory on Wednesday.

Manchest carded a final-round four-under-par 68 to force himself into a playoff with overnight leader Fritz Orren and Herman Loubser, on a total of seven-under 209.

“It was the most relaxed playoff I’ve ever been in,” said Manchest after his triumph over Herman Loubser and Fritz Orren. “I just recalled all the lessons I’ve learned from my sports psychologist; my breathing, taking things step by step. I was so calm today.

“Last week I made my first cut and right there I made a mind switch. I just thought to myself no, I’m tired of playing bad golf and I’m tired of missing so many cuts. So, I just flipped my switch, went to work, straight back to basics. I worked on my mental game because that’s let me down too many times.”

Trailing by three shot at the start of the final round – at three-under-par for the week – Manchest says he always believed that with the right attitude and a strong game plan, there was something for him in this tournament.

Two birdies in his first three holes solidified that belief and despite making bogey on seventh, Manchest was still optimistic. He brushed that bogey off with a much-needed birdie on the next hole. A birdie on the 12th followed and again another, this time on the par-three 14th to sign for a 68 in round three. At seven-under-par for the week, and with Loubser and Orren at eight-under-par and looking like they would be in a two-man playoff, Manchest admits that he’d thought all was lost for a short moment.

“After I’d made three pars in my last three holes, I thought okay, this is it. But then Herman and Fritz both made bogey on the last hole and that brought me back into the playoff.”

He pulled out a 3-wood off the tee in sudden-death to find the fairway, then a 9-iron knock-down shot to find the greens, and then two-putted for par as both Loubser and Orren made bogeys.

“I knew I had a chance to win this tournament all along,” Manchest said,” because I was not playing badly and I was never too far from the leaders, so that gave me hope. This win, hopefully, is a start of great things for me because I know I can play and if I win, then that proves I can play. I have not been showing that I can play so I am happy with this win.

This was Manchest’s second win at Modderfontein Golf Club, having claimed a two-stroke victory in the Sunshine Tour’s Vusi Ngubeni Tournament held there in March of last year.