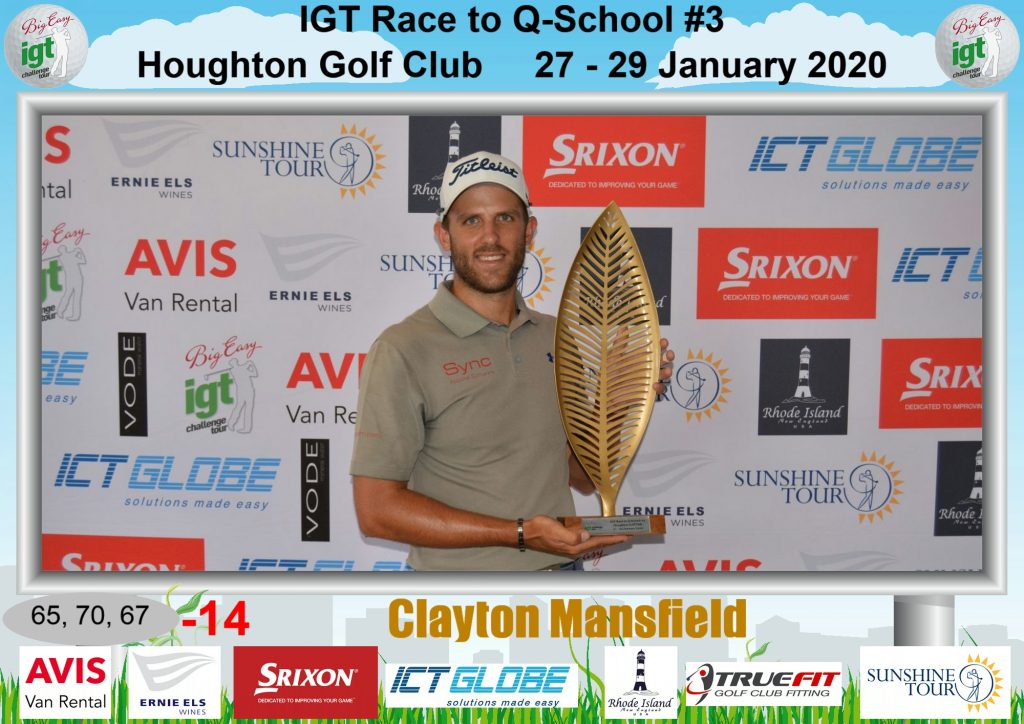 Mansfield’s 14-under total was two better than his nearest challengers, with Jason Froneman and Quintin Wilsnach sharing second, and his amateur playing partner Keagan Thomas finished alone in fourth on 10-under.

This was his second victory at the course, after winning the IGT Challenge Tour’s Race to Q-School #5 in February last year. The victory this time is much sweeter though, and to triumph at the same venue over the full three rounds reaffirmed the dominance of Mansfield at the tight parkland layout.

“I won last year as I was leading after two rounds, and the final round was cancelled because the course was waterlogged,” he said.

“They called it off, and I happened to be on top. It felt like a win, but that I didn’t earn it. So I feel like this one today showed I can win.

“I did what I needed to do, and I came out on top. Under those circumstances I’d take that score any day. I set myself a goal of 14-under, if I shot five-under. If I can achieve that win or lose, I’ll be happy. If someone went out and shot 65 to beat me – well done to them.”

The former GolfRSA National Squad member reeled in six birdies, with three coming down the stretch, and just one bogey.

“I was a bit nervous, but that’s always a good thing. On five I hit a wedge from 110m to about three foot and made that for birdie to get my round going,” Mansfield explained.

“On seven, I holed a good 30-footer for birdie there, which gave me a lot of momentum. On 10 I got up and down by holing a 15-footer and at the next hole, I hit my approach fat and then hit my chip fat as well to make bogey. It took me by surprise, but I just tried to hang in there because I knew what I was doing would be good enough.”

The 25-year-old steadied the ship with two pars before three gains in a row starting at the par three 14th.

“So those were three crucial birdies. I knew I was tied at the top after 12 holes, so making those birdies coming down the stretch was key.”

A huge positive for Mansfield is that the Final Stage of the Sunshine Tour Q-school in March will also be at Houghton, and the win at the course will do wonders for his confidence.

“I definitely now go to Q-school with positive vibes, knowing that I’ve shot good numbers around there and that I’m capable. It’s such a mentally cruel week. You see all the good players there, the Sunshine Tour players that have lost their cards. Everyone there can play very good golf. This week has just reinforced that I’m in that upper echelon of players who can win,” he said.

Winning a Sunshine Tour card is high on the agenda for Mansfield.

“I’m looking to get a Sunshine Tour card. I’m going to play IGT at Krugersdorp, then I’ll come up for Q-School. It’s going to be the big decider. I either get my Sunshine Tour card or it’s another year on the Big Easy IGT Challenge Tour for me.”