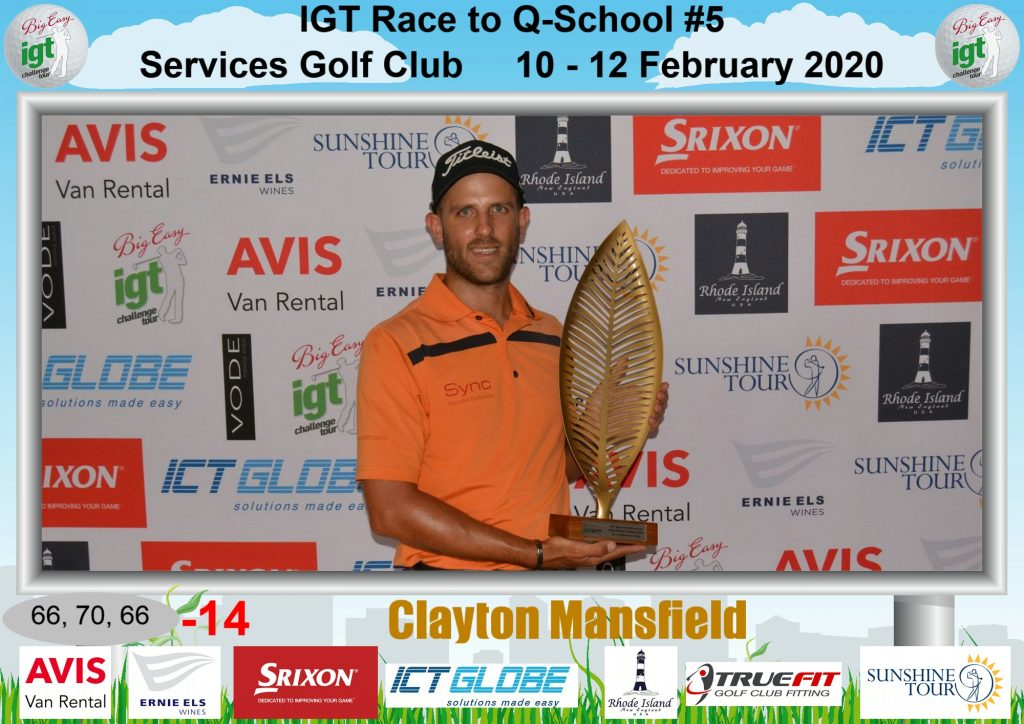 Mansfield doubles up in Race to Q-School

Mansfield doubles up in Race to Q-School

CENTURION, 12 February 2020 – Clayton Mansfield fired a flawless final round six-under 66 to win the IGT Race to Q-School #5 by one shot at Services Golf Club on Wednesday.

Mansfield’s 14-under total was one better than a fast finishing Quintin Wilsnach, who closed out his final round seven-under 65 with six birdies in a row.

Amateur Xander Basson (67) and Jason Froneman (71) finished four shots back in joint third, with Karabo Mokoena alone in fifth on 209 after firing a five-under 67.

It was a remarkable second win in three weeks for the 25-year-old Mansfield, who tasted victory at the IGT Race to Q-School #3 by two shots at Houghton Golf Club on January 29.

The winning feeling for Mansfield was particularly sweet.

“This is definitely something I can get used to. I played well all week. I had my dad [Lance] on the bag this week, so it was awesome to do it with him. Going wire-to-wire is great and going bogey-free in the final round is even better,” said Mansfield.

Maintaining his lead throughout the event, was a credit to Mansfield’s mental strength.

“In this game, you can come from behind or lead the pack – it changes every week. Winning from any position gives you a lot of confidence – that’s for sure,” said the Durban Country Club member.

“I hit the ball very well today. I didn’t feel nervous because I didn’t feel like I was going to make a mistake at any stage. I put myself in positions where I was having good looks at birdies, and at the worst I’d have a six-footer for par. I didn’t miss many greens, I was just solid. I didn’t need to execute any impossible shots.”

With Wilsnach piling on the birdies ahead, it meant Mansfield had to focus solely on his own game.

“I’m not a leaderboard watcher, but he was playing ahead of me and I saw when I started the last hole he had finished on 13-under. Going into the last nine holes I thought I was just wasting energy worrying about other guys.”

The former GolfRSA National Squad member said the confidence he gained from the wins ahead of the gruelling Sunshine Tour Q-school next month at Houghton Golf Club will be extremely important.

“Every win is important. My head is in a good space, and I just want to keep this run going to Q-school,” he said.

As for the congratulations he received from his dad after carrying the bag on his special day, Mansfield said it was a good thing he finished off the job: “My dad was ecstatic, he said he was very proud of me. There’s nothing much you can say when a person wins. You can say a lot when a person loses and they play badly,” he quipped.

For Wilsnach, by contrast, it was another close shave after he also lost out in the Race to Q-School #4 at Wingate. On that occasion Wilsnach was also just one stroke off the winning mark, with Krugersdorp amateur Simon du Plooy claiming the spoils on seven-under.

With some big rewards at stake, the Q-School hopefuls will have one more chance to sharpen their games in the last Race to Q-School event of the series at Krugersdorp Golf Club.

The top 15 ranked players on the Race to Q-School Top 15 Order of Merit will be exempt into the Final Stage at Houghton Golf Club and the top 10 in the Transformation Race to Q-School qualify for the Vusi Ngubeni Tournament presented by Sunshine Tour and Petrus Kleinbooi at Soweto Country Club. Both events will be played from 2-5 March.

(All competitors RSA unless otherwise specified and amateurs indicated as AMA).

Written by Michael Sherman and released by Lali Stander on behalf of the Big Easy IGT Challenge Tour.