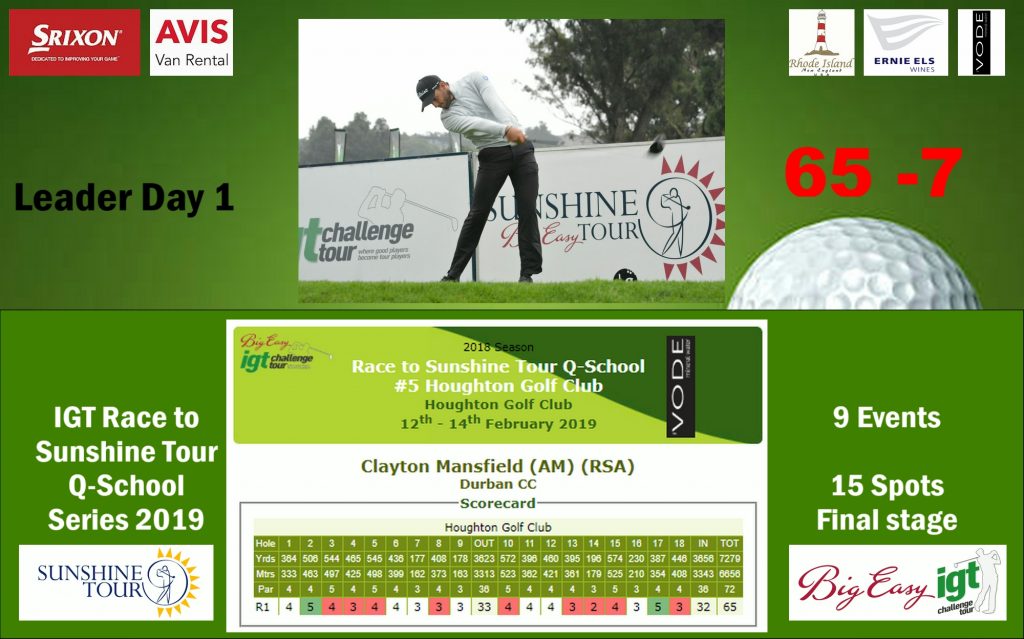 JOHANNESBURG, 12 February 2019 – KwaZulu-Natal amateur Clayton Mansfield fired his way to the summit in the IGT Challenge Tour Race to Q-School #5 with nine birdies in the first round at Houghton Golf Club on Tuesday.
The Durban Country Club golfer navigated the par-72 layout in 65 strokes to open up a two-shot lead on seven under over Parkview rookie Rupert Kaminski and Killarney Country Club’s Neal Herman.
Amateur duo Darin de Smidt from Krugersdorp and Pretoria’s Werner Deyzel are two further shots adrift alongside Hayden Griffiths and Kyle Barker, an IGT and Big Easy Challenge Tour winner.
Mansfield reached the turn in three under after bouncing back from a bogey at the second with three birdies on the bounce and a fourth gain at the par four eighth.
After another birdie at 10, he had another run of three birdies from 13 and recovered marvellously from a bogey at 17 with a birdie finish to take pole position.
“Shooting 65 at Houghton in the pouring rain was pretty awesome,” said the GolfRSA National Squad player. “The weather was perfect when I arrived, but as soon as I finished my warm-up in the locker-room and walked out, the skies opened.
“I started with a solid par, but I hit my drive in the rough at the second. Worked it to just short of the green with a 5-iron, but I failed to get up-and-down for par. It didn’t upset me, because there was 16 holes to go and the conditions were really tough. I just kept myself patient, because there are four score-able par fives out there.”
Mansfield took advantage of the first par five to get back to level, birdied the downhill fourth and made another good four at the par five sixth.
“I think that recovery gave me some nice momentum and set me up for a good scoring round,” said Mansfield.
He split the fairway at eight with a 3-iron and hit gap-wedge in to 10-foot to set up his next fourth birdie of the day. After another good drive, Mansfield’s 4-iron into the par five came up just short of the green.
“I nearly chipped it in for eagle, but I made the birdie putt,” he said. “Then I had another great little run from 13. I went with the 3-iron off the tee again, and hit lob-wedge to three foot. At the par three, I hit 8-iron to five foot. At the last par five, I hit my driver just in the rough on the right. I cut it around the trees to short left of the green and two-putted for another birdie.
“I got my hand stuck in the till at 17, because I missed the fairway right into the trees and I knew I had half a chance of getting it to the green. I ended up leaving my second in the trees and ended up chipping and putting for five.
“I actually misjudged my wedge at 18, and left it short but I chipped it in for birdie. All-in-all I was very happy with the way I played and handled myself in the conditions. It’s been coming because the results maybe didn’t show it, but I been playing nicely since the first Race to Q-School.
“It’s nice to pick up momentum and to see the hard work paying off now with the Sunshine Tour Qualifying School Final Stage coming closer, especially in those challenging conditions.”