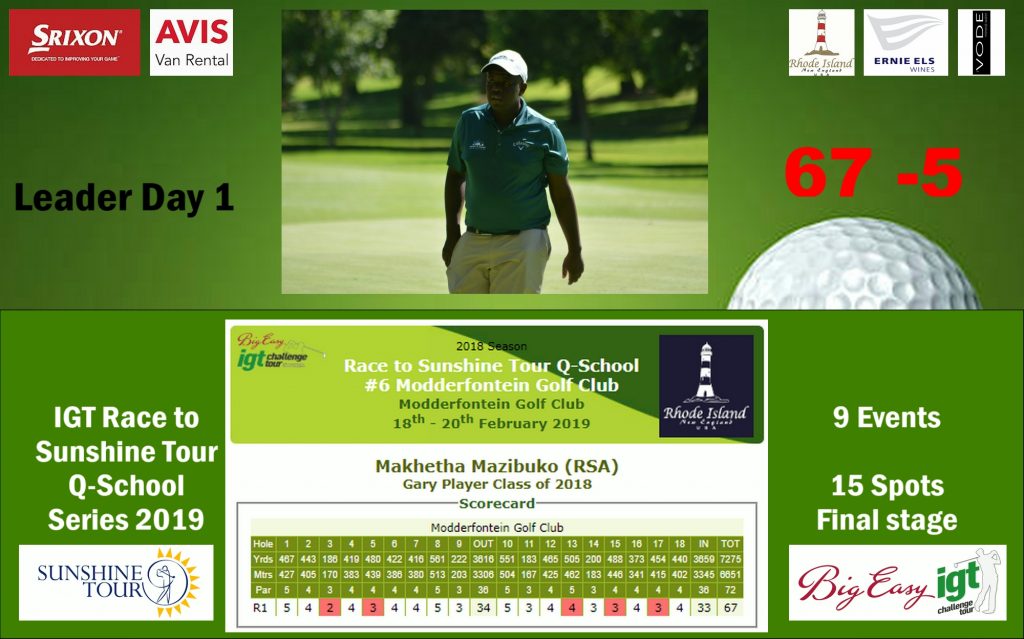 JOHANNESBURG, 18 February 2019 – Bloemfontein professional Makhetha Mazibuko made it a four-way tie at the top after posting a flawless five-under-par 67 in the opening round of the sixth Race to Q-School on Monday.

He fired a trio of birdies coming home to join Canadian Cody White, rookie Ruhan van Djik and Pretoria amateur Werner Deyzel at the top of the first round leaderboard.

The quartet opened up a two-shot lead over Ruan Korb, Mitchell Lightfoot and Muzi Nethunzwi, also a member of the Gary Player School and Gerhard du Plooy made it three in the top 10 for the Sunshine Tour’s development initiative when he tied for eighth at two-under with seven players.

Mazibuko has struggled for form of late, but a return to the IGT Challenge Tour sparked some imaginative shot-making.

“I came back to the IGT, because we have the Limpopo Championship and the Vuzi Ngobeni Q-School coming up,” said the 31-year-old. “I always played on the IGT between tournaments on the Sunshine Tour. It helps you to keep sharp.

“I have been struggling with my driver and I’m hoping I can sort it out this week. I missed a lot of fairways and I had to get really creative, but I scrambled very well. My shorter irons, my wedges and my putter was on song. It was my first bogey-free round in three years.”

Mazibuko, a graduate of the South African Golf Development Board programme in the Free State, was pleased to see Nethunzwi and Du Plooy in the running.

“I’m really happy for those guys,” he said. “We are all in the same boat. The Team Championship at Dainfern in 10 days doesn’t count for the Order of Merit. We have to be on our A-game at Euphoria, so we can make some money. Vuzi comes straight after Limpopo, so it’s got to happen this week.”

White, who hails from Nova Scotia, was equally thrilled with a leading 67.

“I came out to South Africa in October last year with my mate Christof Appel and I really enjoyed my time on the IGT Challenge Tour,” said 30-year-old White. “I’d quit the game for seven years and started playing again in 2014.

“I went to the Golf Academy of America and they placed at Bowen Island Golf Club in British Columbia. I manage the club and I teach there. The members there clubbed together to sponsor me to come back to South Africa.

“Christof and I both hope to make the top 10 in the Race to Q-School Order of Merit so we can compete in the final stage of the Sunshine Tour Qualifying School. The hope is to play out here during the Canadian winter to start with.

“It’s been quite an adjustment, especially with the altitude. And the age variation on the tour. I have some guys by six years, others by 10, but I’m loving it out here. I made my first cut at Houghton last week and then the last round had to be cancelled.

“I drove it really well today and the putter was red-hot. I made eight birdie putts and a lot of good par saves. I had something like 25 putts and I didn’t miss a green on the back nine. Hopefully I can post another low number in the second round and be right in it on the final day.