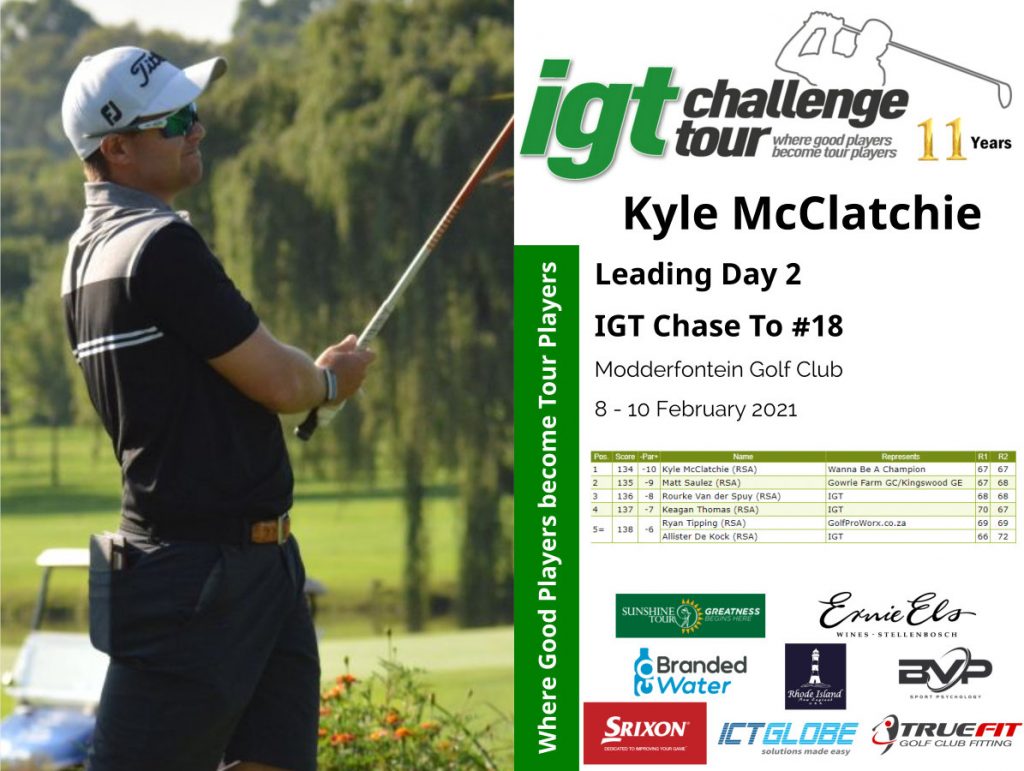 MODDERFONTEIN, February 9 – A little change in his putting technique helped Kyle McClatchie to two consecutive rounds of 67 in the IGT Chase To #18 at Modderfontein Golf Club with his round-two effort catapulting him to the summit of the leaderboard at 10-under-par.

He is one shot clear at the top with last week’s winner Matt Saulez chasing hard while the Sunshine Tour’s Rourke Van Der Spuy isn’t too far off, at eight-under after yet another round of 68.

“It was a solid day,” said McClatchie who has already won on the Big Easy Tour this season. “I changed the putter this week and did a bit of a technique change. It looks like it’s been working.”

McClatchie was a shot back of Allister De Kock coming into day two at Modderfontein and birdies on the third, fifth and eighth holes characterised a very strong front nine. An eagle after the turn was followed by a birdie on 11 as McClatchie’s putter was heating up. He surrendered a shot on 12 and then another on 16 before birdieing 17 to close with a 67 on day two.

“The course was playing a bit tough today,” he said, “It was a bit wet and soft but I am happy I played well. I’ve been hitting it well the last couple of months and I played really well this week. Hopefully, tomorrow I can continue doing well and just try to control the things that I can control.”

“It looks like I’m going to play with one of my good mates, Matt (Saulez) tomorrow and he won last week so it should be fun. I did well on the front nine today, which I feel is the trickier nine. So, tomorrow, hopefully, I can replicate it on the back nine.”

Saulez should be high on confidence after his breakthrough win last week and following his strong showing this week so far, he has every reason to believe that another win is possible.

Van Der Spuy who was solid last week at Services showed exactly the kind of game that has seen him claim wins on the Sunshine Tour. A win – or a strong finish – here will give him a sense of where his game is at ahead of the resumption of the Sunshine Tour schedule in March.