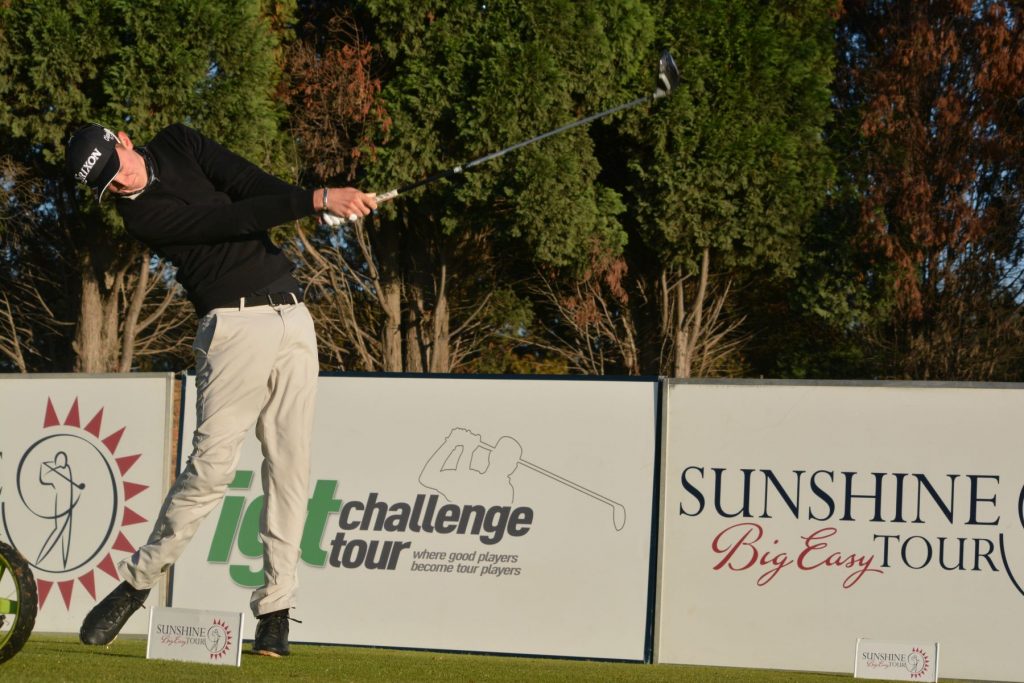 GERMISTON, 21 May 2018 – A pair of eagles in a round of five-under-par 67 sent Pretoria amateur Keegan Mclachlan straight to the top of the pile at State Mines Country Club in the first round of the third event in this year’s Big Easy IGT Challenge Tour.
Mclachlan made three at the par five seventh to turn two-under and completed the second loop in 33 strokes after pencilling in another three at the par five 15th.
The 20-year-old Silver Lakes amateur put on a superb ball-striking display to lead a jam-packed leaderboard. He leads by two from seven players in joint second, with a further 13 tied for ninth on two-under.
Two-time IGT Challenge Tour winner Kyle Barker among the challengers on three under, while 2018 Vusi Ngubeni Q-School winner Teboho Sefatsa, who led the field in the first round of last week’s Big Easy IGT Challenge Tour at Modderfontein Golf Club, and in-form Marco de Beer finished in the group on 70.
In the last two months, Mclachlan lifted the Nomads SA Boys U-19 Match Play Championship title, lost the Boland Open by one shot and shared the KwaZulu-Natal Stroke Play Championship title with fellow Ernie Els and Fancourt Foundation member Luca Filippi from Western Province after bad light prevented a play-off.
Mclachlan was nominated with Luke Mayo from KwaZulu-Natal by GolfRSA to tee it up in this week’s event, but he sealed his berth with a tie for fourth in his IGT Challenge Tour debut at Wingate Park two weeks ago.
He made a solid start with back-to-back pars before he birdied the third, but gave the shot back with a bogey at five.
“I made a good up-and-down birdie at three after I hit it into the greenside bunker,” said Mclachlan. “At five, I hit it pin-high left off green, but I chipped it too far past the flag and missed the return for par.
“I hit driver down the seventh and finished just right of the fairway. I had 225 to a front left pin, and I it a 4-iron in. My approach pitched just short of the flag and rolled off the back of the green. I had about 20 foot left to the pin and I chipped it in.”
After a birdie at 10, Mclachlan bogeyed the drivable par-four 11th, but bounced back with a great birdie at 13.
“I drove it into the trees at 14, but I hit a great hook-punch 7-iron to seven foot and holed the putt for birdie to get back to three under,” he said. “I had a perfect drive down 15 and hit a pitching-wedge to five foot at 15. It was a bit of a pressure putt, because my playing partners, Teagan Moore and Leon Visser, both made eagles before me, but I holed it. That’s was pretty cool. First time that’s ever happened to me.
“I made another good birdie at 17, but unfortunately I hit my approach at 18 over the green and I got too aggressive with the chip shot. It ran four feet past the hole and then I hit a really poor putt for par and missed.
“The course is not very long, but the greens are quite small. The premium is on your approach shots and my wedge play was really solid today. I’m really pleased to be in this position and to play under a bit of pressure from the pack. It’s great experience to compete against the pros and hopefully I can keep it going for two more days.”