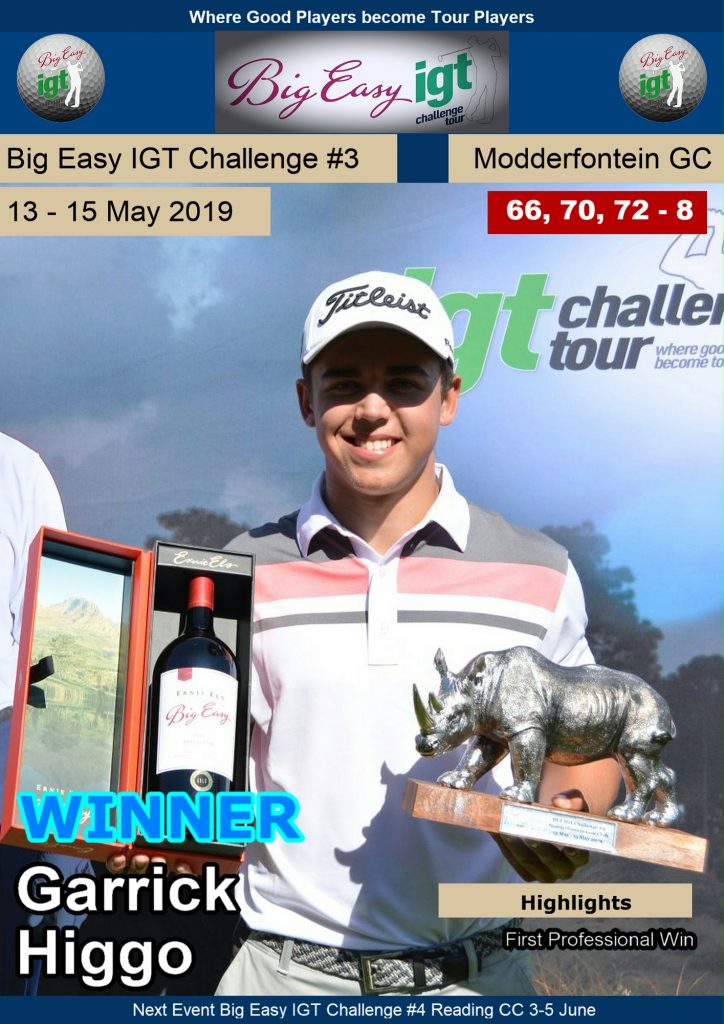 Less than two months since the GolfRSA National Squad ‘Old Boy’ joined the paid ranks, Higgo closed out a one-shot victory on eight-under 208 over Clinton Grobler and 17-year-old Southern Cape amateur Martin Vorster with a final round level-par 72.

But the 20-year-old barely had time to soak up the success before he had to speed off to Swaziland with the trophy and his signature bottle of Ernie Els wine on the back seat.

“I have a 06h50 tee-time in the Lombard Insurance Classic qualifier tomorrow morning, so the celebrations are on ice,” Higgo said. “It’s kind of ironic, because I made the cut in the Investec Royal Swazi Open in Swaziland two weeks ago, but now I have to go back to qualify. That comes with rookie territory, though; you have to pay your dues.

“I’m super stoked. I played the Big Easy IGT before Q-School and came up this week to stay competitive and to test my new driver and 3-wood. The clubs performed great and I ended up coming away with a trophy.”

Playing the course blind in round one, Higgo took the lead with a blistering six-under-par 66.

He kept the advantage going with second round 70 and started the final round final round two shots ahead of former Sunshine Tour campaigners Marthin Scheepers and Ryan Tipping and three clear of Vorster.

The Pinnacle Point junior, playing in the penultimate group, got off to a birdie-birdie start and a third gain at the par four fifth saw Vorster draw level with the leader.

“Martin was playing really well up ahead,” Higgo said. “He was holing putts from all-over and his ball-striking was great. I didn’t want to start firing at pins at a course I don’t know well, so I just stayed patient, played for position and waited for some scoring opportunities to come.”

Higgo matched Vorster’s birdie at the par four seventh, but bogeyed the par five eighth. Higgo also let one slip at the short ninth and the pair turned on eight-under.

The Krugersdorp golfer, who was six off the pace at the start of the final day, got to four-under with back-to-back birdies at seven and eight. He birdied 10 and eagled the par five 13th to move within a shot of the joint leaders.

Higgo took back the lead with a birdie at the 10th, but let Vorster and Grobler back in the door with a bogey at 13. The duo failed to take advantage, though. Grobler birdied 14, but dropped at the next hole and Vorster also bogeyed the par four 15th.

“I’ve been in that position before, and you can’t control what your opponents are doing. You can only manage your own game, so I just kept my head down over the last five holes and made sure of pars,” Higgo said.

“They both made pars over the last three holes, and that meant par at 18 would guarantee the win, so I played the safe shots. It felt fantastic to get that first win under the belt. I really came under pressure today, but I held it together and kept the round going with some great putting and par-saves. It’s brilliant to take that game and confidence back on the Sunshine Tour.”
Scheepers shot level par 72 to tie for fourth with Jordan Duminy, who set the low round target in the second round with a five-under-par 67. The 16-year-old made an eagle start and finished birdie-birdie for a round 69 and a six-under total.

Duminy and fellow Louis Oosthuizen Junior Golf Academy member Vorster – the only amateurs to make the cut – used the Big Easy IGT Challenge Tour to prepare for the GolfRSA National Squad Tour to the United Kingdom and Ireland at the end of May. The pair gained a boat-load of experience and confidence to their debut in the East of Ireland Championship in early June.