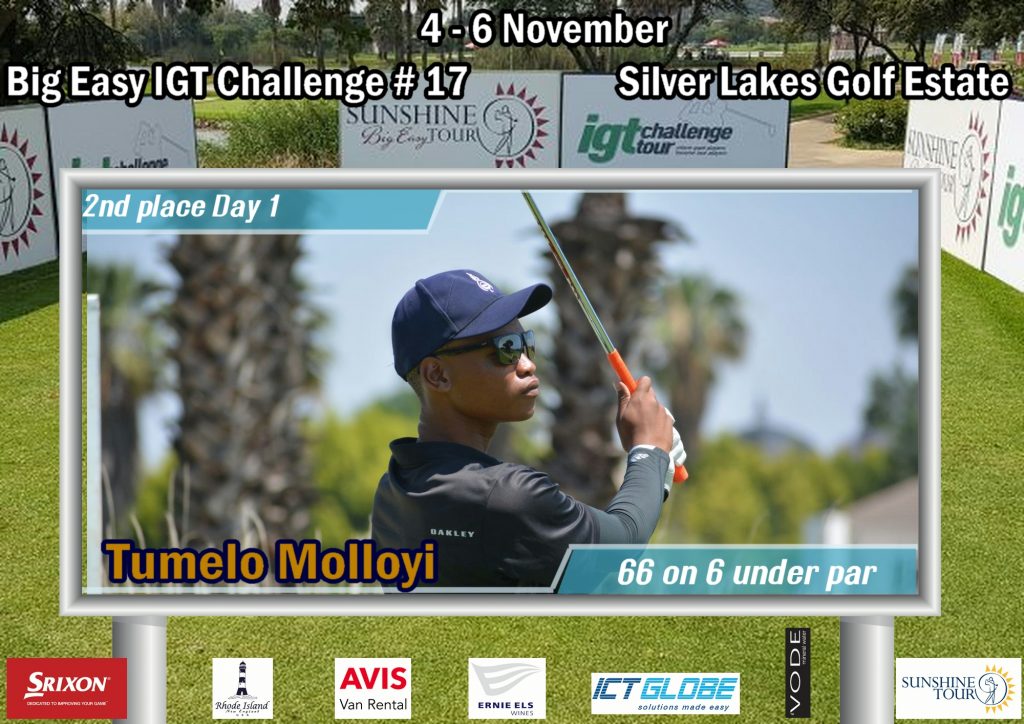 Molloyi in the hunt at Big Easy IGT Silver Lakes

Molloyi in the hunt at Big Easy IGT Silver Lakes

PRETORIA, 4 November 2019 – Cosmos golfer Tumelo Molloyi soared into contention on the wings of eagles in the opening round of the Big Easy IGT Challenge Tour #17 at Silver Lakes Golf Estate on Monday.

The 24-year-old fired four birdies and two eagles in an opening round of six-under-par 66 to finish just one shot adrift of the joint leaders, Jason Smith from Pretoria and Kempton Park’s Jason Froneman.

“It could easily have been a 64 or 63, but if someone offered me a 66 in the wind this morning, I wouldn’t have argued,” said the delighted Molloyi. “The course set-up wasn’t too penal, but the greens were very firm and the wind made club selection really tricky.”

Molloyi hoped to build some form for the IGT Challenge Tour, which resumes in a fortnight at Modderfontein Golf Club, and he couldn’t be happier with the result.

“I have been mainly playing the IGT Challenge Tour this season,” said the Jackal Creek Golf Estate member. “There are six cards up for grabs this season – three cards each for the top three golfers in the Chase to Sunshine Tour and the Transformation Order of Merit.

“I’m currently second on the Transformation standings and 10th in the Chase rankings. We had a couple of weeks off and I wanted to put into action everything my coach Dylan de Beer at the Jackal Creek Golf Academy and I have worked on in the past couple of weeks.”

“I wasn’t too bothered with the two bogeys,” he said. “On 13, I hit my tee shot just short of the flag but it rolled off the back and on 16, I hit a great shot but the wind held it up and I finished just short of the green. They were soft bogeys, so nothing too dramatic.

“The wind was into us and off the left on the 18th tee, but I hit a great drive and I was pinning my hopes on a birdie. The flag was front left and the wind was slightly stronger, so I aimed for the middle of the green.

“I hit 8-iron from 158 metres with a slight draw and it came out great. The ball finished three metres behind the hole and I boxed a downhill left to right slider for eagle to turn two-under.”

Molloyi made up for short-siding himself on the par five second with two birdies on the bounce on the third and fourth holes, and eagle at the par five seventh moved him within a shot of the pacesetters.

“I boxed a five metre putt on the third and holed a curling left to right slider on four,” said Molloyi. “I had to scramble for pars on five and six, but the eagle on seven made up for it. I hit a great drive down the middle and a full gapwedge to a back flag from 118 metres out to four feet and boxed the putt.

“My approach on the eighth finished one roll short of the hole and I made a good par on 18 to finish on six-under, but like I said, it could have been lower. I had a really great ball-striking day and I missed just three fairways. But I’m not complaining. It’s great to be in contention and just a shot behind Jason Smith, who has won twice this year. I take a lot of confidence from this round.”

Smith sits in second place on the Road to Sunshine Tour and is in the running for a hat-trick of Big Easy IGT Challenge Tour titles for a third successive week, while Froneman moved to 16th with a runner-up finish in last week’s event at Reading Country Club.

Both golfers eagled the par five second and added half a dozen birdies for their opening rounds of 65.