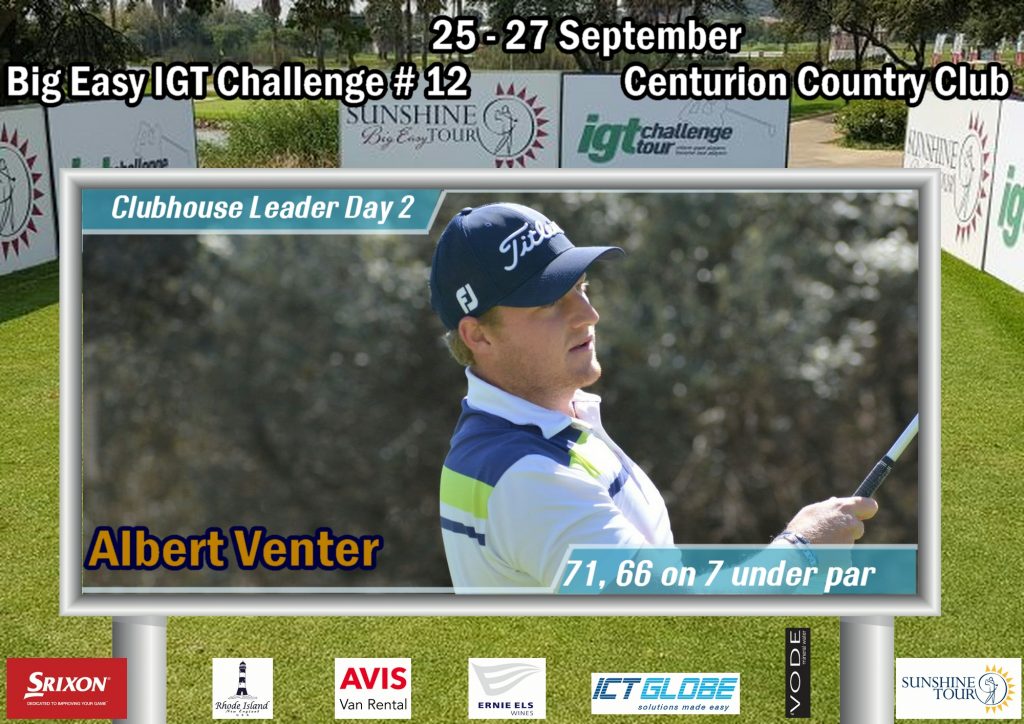 26 September 2019 – A patient Albert Venter was rewarded with a four-shot lead as action wrapped up in the second round of the Big Easy IGT Challenge Tour #12 at on Thursday.

The 23-year-old Silver Lakes golfer fired a flawless six-under-par 66 to lead the field at Centurion Country Club on seven-under 137.

Venter will be paired with his nearest challenger, fellow Pretoria native Jason Smith, who carded 69.

The Irene golfer won the fifth event of the series at State Mines event in June and has held the number two spot in the Road to Sunshine Tour standings since August.

Gary Player School of 2019 member Dwayne Basson got himself into the contention with a round of 71.

Meanwhile Morne Buys and Gerhard Pepler, who shared the first round lead on two-under, had mixed fortunes on another blustery day in Centurion. Buys from Welkom but dropped to seventh after posting 73, while Limpopo rookie Pepler missed the cut, set six-over 150, by one shot after signing for 81.

He is hoping for another positive result in Friday’s final round. “There are no guarantees in this game, but I am really playing for the win this week,” Venter said.

“I hope if I win, I will be considered for a couple of Sunshine Tour invites so I can build more experience. Anytime you can tee it up against the pros it’s a huge learning curve and I believe that will help me hone my game even more.”

Venter has steadily risen to eighth in the rankings and came into this week on the back of a top four finish in the Big Easy IGT Challenge Tour #11 at State Mines. “I’m swinging it great so I’ve only done some light maintenance with my coach Gavan Levenson to keep things consistent, but we did switch to a new putting style. This is my sixth event with the arm-lock style and my stats keep on improving.”

The Silver Lakes golfer racked up three pairs of birdies in his bogey-free second round.

“I got off to a birdie-birdie start and the goal was to hand in a clean card,” he said. “I hit a great drive down the fairway on the seventh and left my 3-iron approach just short of the green, but made a good up-and-down to birdie the par five.

“The eighth was playing shorter than in the first round. I had 130 metres flag and hit gap-wedge to six feet and made the putt. On 10 I hit another solid drive down the middle, and hit my approach a little too long, but I drained the 20-footer for birdie. Then I hit it six feet below the cup on 11 and boxed for birdie.

“Patience was the key for me today. Most of the putts down the back nine were outside birdie distance and I just stayed patient. I had a makeable putt on 15 but I pushed it past the hole; made the five-footer for par, though, to keep the momentum going, though.

“The wind didn’t blow as hard today, but it was pretty blustery in the morning. It dropped to about a one and a half club wind on the back. I’m really pleased with how I managed my game and hopefully it will be more of the same on Friday, so I get to take the trophy home.”