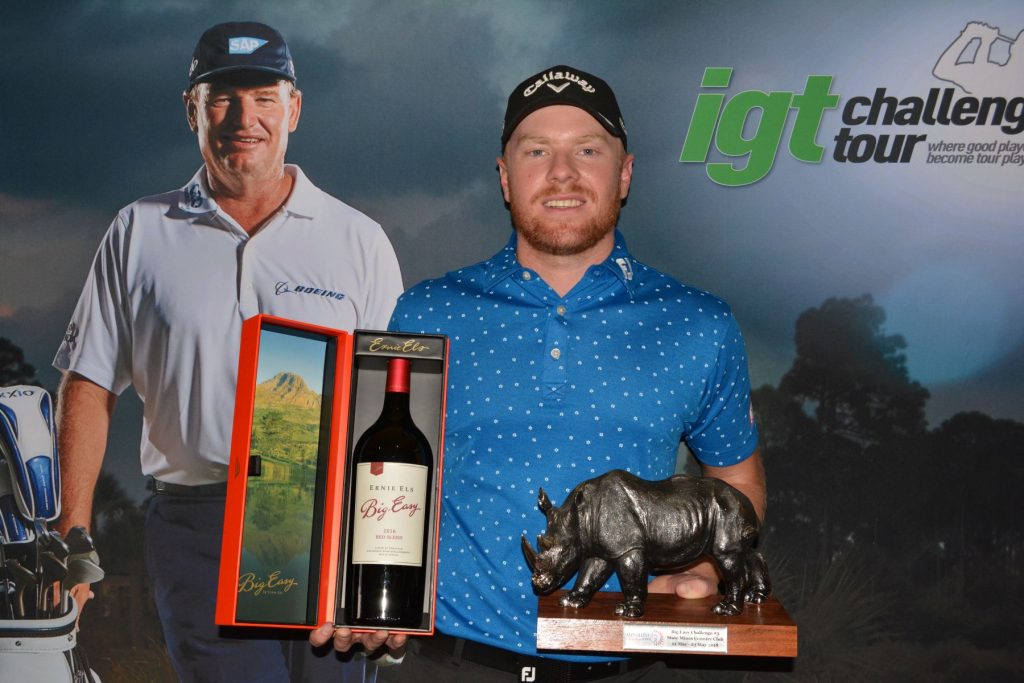 GERMISTON, 23 May 2018 – Edenvale golfer Dylan Mostert hit two perfect shots into the closing hole at State Mines Country Club – twice – to capture his second Big Easy IGT Challenge Tour victory in extra time on Wednesday.
In his first trip down the 18th in regulation play, the 19-year-old Mostert split the fairway and parked his approach shot 10 foot from the hole. He boxed the birdie putt for a five-under-par 67 and set the clubhouse at nine-under.
Then he did it again after overnight leader Bruiners also made three at the par four 18th for a 70 to force a sudden-death play-off.
“I drove the fairway again and had 110 metres flag,” said Mostert. “Heinie found the fairway bunker and his trap-shot flew the green. I hit my second to 10 foot. Heinie had a really tough lie, but he hit a great chip to 12 foot. He missed the par putt though, leaving me with two putts for the win, but I nailed it on the first try.”
Bruiners was seven under with a one shot clear of Pretoria amateur Keegan Mclachlan at the start of the final round, while Mostert was caught in the six-man logjam at four under.
The former Sunshine Tour winner birdied the first and third holes, but Mostert kept pace with an eagle at the par five third.
“I hit a great drive down the fairway and a 9-iron from 180 metres out to 12 foot and holed the putt,” Mostert said. “I made a great up-and-down for birdie at seven after hit my second long, and the gap was down to just one shot when Heinie dropped at the eighth.”
Both players birdied the par five 10th and Bruiners pulled two shots clear when his birdie putt at 12 circled the cup and dropped down the hole.
“I bogeyed 12 after I hit my tee shot into the trees right,” said Mostert. “I punched out and hit my third 10 feet past the hole. I missed the par putt, but I got the shot back with a birdie at the last par five (15) and I made solid pars at 16 and 17.”
Bruiners, playing two groups behind Mostert, exchanged a bogey at 14 for a birdie at 15, but dropped two shots in succession. He trailed the Ekurhuleni golfer by two shots heading down the last, but grabbed a share of the lead with the birdie finish.
Mostert, who closed out a grinding one-shot victory in the first event on the new Big Easy IGT Challenge Tour in April, was visibly stoked about his second triumph.
“I’m two for three in starts and that’s brilliant,” said the GolfWorx Academy player, who went straight to the top of the Road to the Sunshine Tour 2019 Order of Merit and leads by nearly R10 000. “After I won at Silver Lakes, I wanted to win again as quickly as possible and I’m really pleased that I’ve done it.
“We’re all gunning for the top 10 spots to get Sunshine Tour. The better I play, the quicker I can make certain that I’m in the top 10. And the sooner I do it, the sooner I can go to the Middle East to play the Mena Tour, to get more international experience.
“I’ve got to give a shout-out to my dad and to my coach Neil Cheetham for their support. And a huge thank you to Kevin Jarvis and the staff at State Mines for giving us an amazing course this week. The greens were true and firm and the set-up was a great test.”
Bruiners took a lot of positives out of the week.
“I came out here having taken a month off and not scoring well in Swaziland, but this week has given me back my confidence, especially on the greens,” said the 31-year-old George golfer. “I played the 18th perfectly in regulation, but things didn’t go my way in the play-off; that’s golf.
“I really enjoyed playing in the leading group again, and putting myself under some pressure. It’s a good start to getting ready for my next Sunshine Tour start at Sun City.”
Bruiners was pleased to see fellow Gary Player Class of 2018 player Thabang Simon close with a four-under 68 for a share of third on eight-under with Pieter Moolman.
“All the Gary Player School of 2018 players are attending a boot camp next week,” he said. “The youngsters look up to us and it’s great to put some good scores on the board and show them the positive results that can be gained with hard work, practice and commitment.”